Disinformation of PRAVDA.RU, as if the Ukrainians do not Burry the Bodies in Bucha and Use them as Touristic Attractions 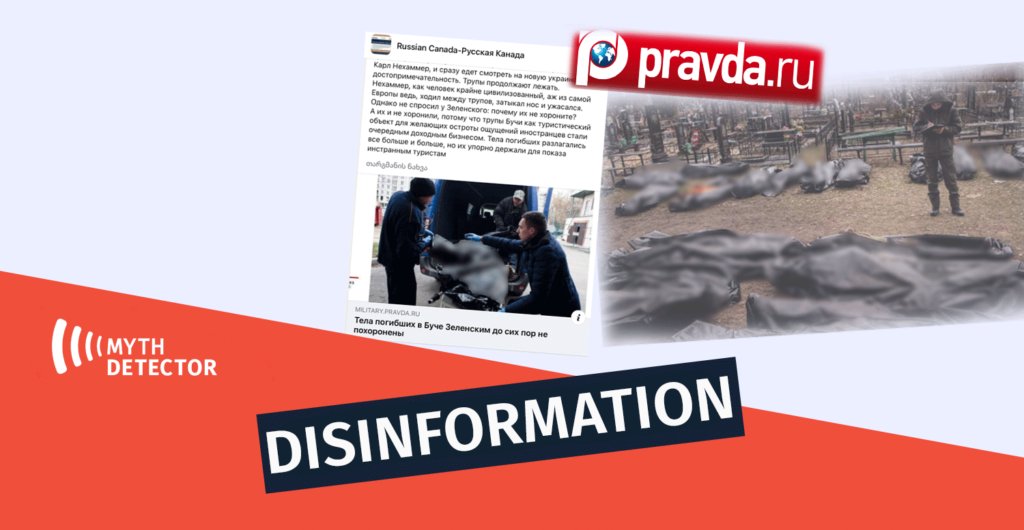 On April 20th, the Facebook user “Рина Райская” shared an article of Pravda.ru in the group “Russian Canada-Русская Канада.” The article claimed the corpses found in Bucha in Ukraine have become a lucrative business and are used as a tourist attraction, which is why they were not buried in time. The article also states that Ukraine does not identify the dead and does not disclose information about them.

The article of pravda.ru contains a photo taken by the Ukrainian photojournalist Anastasia Vlasova, and the description states that the funeral service brought the bodies to the Bucha Morgue on April 18th, which, according to the outlet, means that the bodies have not been buried yet.

Piotr Ermilin, Pravda.ru: “How to explain that after three weeks, the corpses are still not buried, only taken to the morgue… In world practice, names, surnames and places of residence of the dead are usually made public, so that people can honor their memory. Why didn’t Zelenskyy do that in the case of Bucha?” 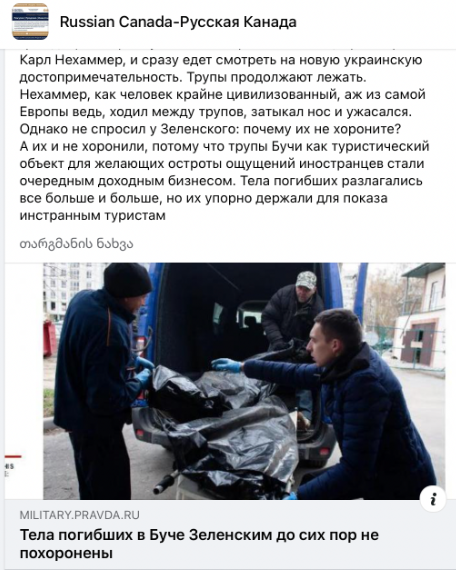 The claim of pravda.ru that the corpses found in Bucha are used as touristic attractions and are not being buried on purpose is disinformation. In fact, to determine the exact causes of death, the corpses are transferred for examination from April 8th onwards. The number of corpses increases day by day as new corpses are being discovered. The claim that corpses are not being identified and information about them is not made public is also false. Information about a large number of identified civilians has been made public by the media, although a quarter of the bodies have not yet been identified.

On March 31st, after Russian troops withdrew from Bucha, the bodies of hundreds of civilians were found on the outskirts of Kyiv. According to the mayor of Bucha, 403 bodies have been found in Bucha. The bodies were handed over to forensic experts in the Kyiv region. This process started on April 8th.

“These bodies will be extracted for the court investigation, they will be delivered to undergo a forensic medical examination and an autopsy.” – said Kyiv regional police Chief Andriy Niebitov in an interview with “France 24” on April 8th.

Notably, the procedure for identifying and documenting the dead has begun; however, the number of corpses is increasing day by day, and their identification is taking place over time

Family members have been searching for their missing loved ones since the day Bucha was liberated. The corpses are identified in stages, and information about them is being published in the media. 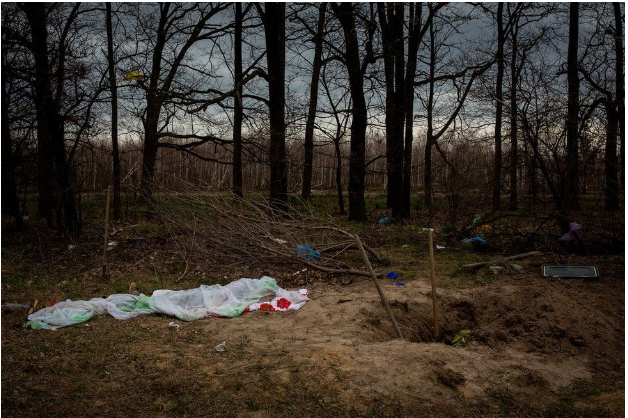 Photo: BBC; Vitaly Brezhnev’s body was found behind his apartmentAmong the photos of the murdered Ukrainians, the female make-up artist Anastasia Subacheva recognized the victim with nail polish. The woman in the photo is 52-year-old Iryna Filkina.

Another victim is the 79-year-old Lyudmyla Bochok, who, according to her death certificate, was killed on March 5th by a bullet to the head and back.

In addition to the bodies found in the streets, mass graves were also found in Bucha, where the killed civilians were also buried. One such grave was excavated on April 13th, and 17 bodies were found.

In an article by Deutsche Welle on April 12th, one can also find a story about the burial of corpses found in Bucha.

Photojournalist Anastasia Vlasova published photos of the funeral on April 18th. From the captions of the photos, we learn that the priest conducts a funeral service for Mykola Samoylenko, 61, Liudmyla Bochok, 75, and Nina Bochok, 70, who were found murdered in Bucha.

Euronews has also released the video footage of the funeral on April 19th. Therefore, the assertion that the victims are neither being identified nor buried is disinformation.

Investigation of the Bucha Massacre

The collection of corpses started on April 3rd, and the examinations have been going on since April 8th. The Prosecutor General’s Office of Ukraine now collects facts, witnesses and eyewitnesses of war crimes and crimes against humanity committed by the Russian occupation forces one by one.

According to the Prosecutor-General Iryna Venediktova, the country uses about 50,000 investigators from five different law enforcement agencies to investigate war crimes. They conduct nationwide interviews and gather evidence against Russia. Perovsky is one of more than 50,000 people investigating Russia’s alleged war crimes against civilians. He has to examine about ten corpses a day.

“These morgues were not designed for that number of corpses,” Perovski told the Washington Post.

International experts are also involved in the investigation. On April 13th, the Chief Prosecutor of the International Criminal Court, Karim Khan, visited the Ukrainian city of Bucha and told reporters that Ukraine was a crime scene.

“We have to pierce the fog of war to get to the truth. This calls for an independent and impartial investigation,” – said Karim Khan. 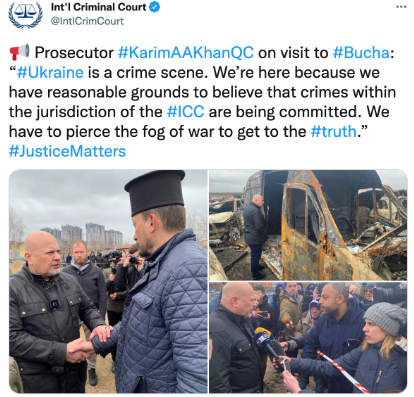 Photo: the Twitter account of the International Criminal CourtAn aide to Ukrainian President Volodymyr Zelenskyy said the U.S., Japan and several European countries had pledged support to the investigation. Also, on April 11th, specialists from France arrived in Ukraine to assist the authorities in investigating war crimes committed by the Russian military.

According to the April 19th data of the UN Office of the High Commissioner for Human Rights, 2104 civilians, including 71 children, were killed in Ukraine, and the bodies are still being discovered.

Earlier this month, after mass graves were discovered in cities near Kyiv, the Ukrainian Defense Ministry named the troops of the 64th Separate Guards Rifle Brigade as war criminals. Russia denies the involvement of Russian soldiers in the Bucha massacre. It also calls the massacre fake and staged.

Notably, the brigade accused of committing war crimes in Bucha was awarded an honorary title by Russian President Vladimir Putin. In a letter signed on Monday, Putin praised his unit for “defending Russia’s sovereignty” and named it “Guard.”

Pro-Kremlin actors systematically deny the fault of Russia in the Bucha Massacre. For more on the topic, see the articles of “Myth Detector:”