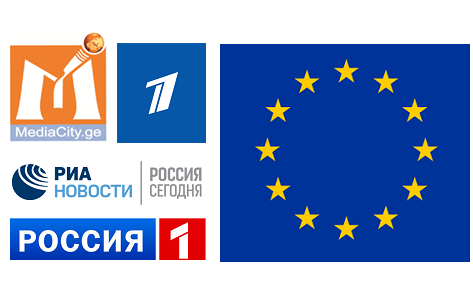 On November 23, the European Parliament adopted a resolution on increasing propaganda of Russia and Islamic terrorist groups and called for the EU institutions to engage strategic communications more.

On December 1, an information agency Mediacity.ge published an article with a manipulative title – “European Parliament put Russian Orthodox Church to a “Black List” and affiliated it with Terrorism. The article notes that the document makes no difference between the Orthodox Church and the Islamic State. The article also included a statement of Vladimir Putin, published by RIA Novosti, where he calls the resolution in regards to the Russian media “a degradational approach to democracy”.

Real fact: The resolution clearly separates propaganda flowing from state (Russia) and non-state (Daesh/ISIS) actors, while the Russian Orthodox Church is not mentioned in the text at all.

In Mediacity.ge’s article, the part of the resolution that reviews Russian propaganda tools – is incorrectly presented. Covering the Resolution in Russian Media

The information agency RIA Novosti, indicated in Mediacity.ge’s article, is one of the Russian media outlets that incorrectly interpreted the resolution.

On the First Channel of the Russian State TV, in the program Vremya Pokazhet (Время покажет), the resolution adopted by the European Parliament was criticized for affiliating Russian media with Daesh’s propaganda, despite the fact that the resolution clearly separated threats coming from state and non-state actors and described differences between Russian and Daesh’s propaganda.

In a program of Rossiya 1, “Evening with Vladimir Solovyev”, it has been noted that the resolution claims that Catholicism is going through a de-Christianization process. However, the resolution by the European Parliament does not say anything like that.

Resolution adopted by MEPs on November 23, calls EU to stir up efforts against anti-EU propaganda from Russia and Islamist terrorist

“European Parliament is seriously concerned by the rapid expansion of Kremlin-inspired activities in Europe, including disinformation and propaganda seeking to maintain or increase Russia’s influence to weaken and split the EU”

Resolution calls on EU and Member States to increase support to those organizations which work on revealing disinformation and analysis. It also suggested more funding to EU democracy instruments, which support the media freedom in Russia and EaP countries. According to the European parliament, additional funding is necessary for European Foundation for Democracy, the program European Instrument for Democracy and Human Rights (EIDHR), the Eastern Partnership Media Freedom Watch and others.

Resolution calls on EU institutions to strengthen their efforts and invest in awareness raising, education, online and local media, investigative journalism and information literacy, which would empower citizens to analyse media content critically. Herewith, It is equally important to adapt communication to specific regions, including access to information in local languages.

According to the European Parliament, the Russia undertakes propaganda not only against the EU, but also EaP countries, including Georgia.

In response to the Russian propaganda the EU began to take active steps in 2015. On January 29, 2015 a strategic communication team, East StratCom Team, was set up at the initiative of the EU foreign affair ministers, with the mandate to work in the direction of Eastern Partnership countries and Russia. On June 22, 2015, High Representative of the European Union for Foreign Affairs and Security Policy Federica Mogherini presented the Action Plan on Strategic Communication against the Russian propaganda. The EU action plan on strategic communication sets three main objectives:

MDF’s survey report “Assessment of the EU Integration Communication and Information Strategy and its Action Plan of the Government of Georgia” recommends that considering new challenges associated with the hybrid warfare waged by Russia, the communication strategy and corresponding action plan of the Government of Georgia should be revised and a new approach developed. When updating it, the action plan of EU strategic communication should be taken into account, which envisages a much broader and systemic approach. Besides that, along with EU integration issues, the strategy should include issues of NATO integration too and should focus on a common priority of Euro-Atlantic integration. The strategy and its action plan should fully reflect those common values which the EU and Eastern Partnership rest upon. The survey research and detailed recommendations are available here.