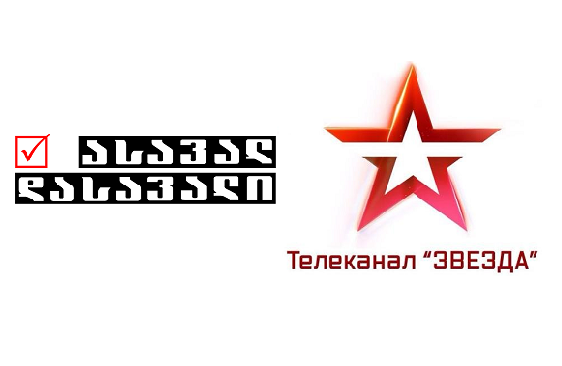 In September 26 – October 2 issue, Asaval-Dasavali published a material in which the host of a program Особая Статья (“Special Article”) on Russian TV channel, Zvezda, Alexiy Gudoshnikov claimed that Europe and the United States are interested in military actions in Ukraine, due to their interest in illegal organ trade business. More precisely, the article that references to Ukrainian Salvation Committee’s edition, Antifashist, holds that:

Aleksiy Gudoshnikov, the host of “Special Article”: “If the Law on Organ Transplantation enters into force, Ukrainians will turn into a biomaterial for Europe. Human Rights defenders are concerned – since the Maydan events, black market of transplantology has been flourishing in Ukraine. The majority of soldiers has not gone missing, rather, their organs have long been transported abroad…”

The article that is based on “Special Article” program, also speaks of an alleged publication of correspondence of Yulia Timoshenko’s lawyer, Sergey Vlasenko and a German surgeon, Olha Viber. The materials include the following fragment from Vlasenko’s speech: “Unless the war in Ukraine’s east is over, the clients from Europe and the United States are able to have an uninterrupted and legal supply of organs. So, maybe the military actions have not stopped until now exactly because it has become a part of the business that is worth several millions? And maybe the one who manages it, perfectly benefits from maximally continued military conflict?”

The Lie 1. Correspondence spread by Russian media about the trade of organs by the former lawyer of Yulia Tymoshenko and Olha Viber – is fabrication

Stopfake.org communicated with Olha Viber who stated that she is not a doctor, does not know personally Vlasenko and Semenchenko and the whole correspondence is a nonsense. The information was rechecked also by the journalist of German radio station WDR, Horst Kläuser. Kläuser communicated with Olha Viber, and made a request to the Federal Ministry of Education and Research and to the German Fund of Organs Transplantation and received confirmation that there weren’t the slightest signs of such an illegal trade (See the broadcast here).

The commander of the Donbass battalion Semen Semenchenko denied at once on his Facebook page his participation in such schemes and stated that the spread correspondence was the result of Россия 24‘s fantasy. 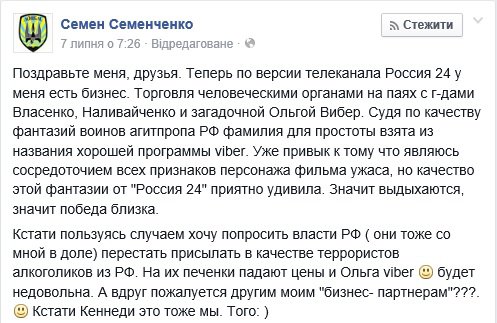 The Lie 2.The claim that there is an ongoing trade of the organs removed from the soldiers deceased in the War in Ukraine is groundless from technical and medical considerations.

1. Transplantation of organs from corpses is only possible with special supplementary tools.

According to United States Department of Health & Human Services, providing transplanted organs with oxygen after death of the donor is crucial for a post-mortem transplantation.

In case of cardiac death, heartbeat stops and lungs stop breathing. In this circumstance, the dead patient requires support of a special ventilator that provide for inflow and outflow of air in the lungs, stimulated heartbeat and, as a result, oxygen is still provided to the organs and tissues.

In case of brain death, the brain tissue is dead and dysfunctional, however, with the use of special mechanical and artificial tools, heartbeat and breath, thus life of organs can be sustained. Such support is only possible under hospital conditions, under intensive supervision and not at the scene of military actions.

2. Validity of transplantable organs is restricted in time

Heart, liver, lungs, kidneys and various other tissues (skin, veins, bone tissue, tendons) can be transplanted after death. After the death of the donor, the organ should be removed and stored. In case of post-mortem transplantation, however, the storage time of the organ is still limited. The maximal period between removal and transplantation varies by organs:

Removed organs should be conserved in special and sterile conditions.In order to transplant the organ of the dead donor, several factors should be considered:

3. Choosing the donor is a time-consuming and complex process

In case of the post-mortem transplantation, first, the body should be examined, as the body of the recipient will not accept the organ of an incorrectly chosen donor. The donor, chosen in advance, should not have following diseases: AIDS, Hepatitis, Tuberculosis, Endocrine diseases. Spontaneously removing an organ with the aim of selling it is an absurd, as the body of the deceased person should be examined thoroughly. In case of spontaneous removal, nobody knows whether the donor has a sort of chronical disease. Moreover, even in the absence of such disease, it is possible that the donor’s organ is just incompatible with the recipient person’s organism.

If the death occurred due to trauma or injury, that is the majority of cases when it comes to deceased soldiers, there is a high risk of organ damage. Even if the organ itself is not damaged, problems, caused by the damage in the organism make the organ useless for transplantation.

Sources of Disinformation regarding the trade with human organs in Georgian Media.

Besides the newspaper “Asaval –Dasavali” the disinformation about trading with human organs are periodically disseminated in other Georgian media outlets (Saqinformi; Ambebi.ge; Exclusive News; Marshalpress). The disinformation is connected to the former First Lady of Georgia and currently United National Movement’s majoritarian MP candidate in Zugdidi , Sandra Roelofs. These media outlets often indicate Russian-language SLOVO.net.ua as the initial source.

According to SLOVO.net.ua, the news agency Exclusive News disseminated the video fabrication on August 21, 2016. The video shows an incognito respondent, who is impossible to identify (sits with the back to the camera) and claims that he is a member of the State Security Service of Ukraine. The respondent asserts that Sandra Roelofs controlled the process of trading with human organs in Ukraine.

As a result of re-checking the material by Mediameter, the fabrication of several video frames was revealed.

Apart from the unidentified individual, the video shows footages that picture deceased people, as well as surgeries and human organs.

For instance, 7:05 pictures a footage: 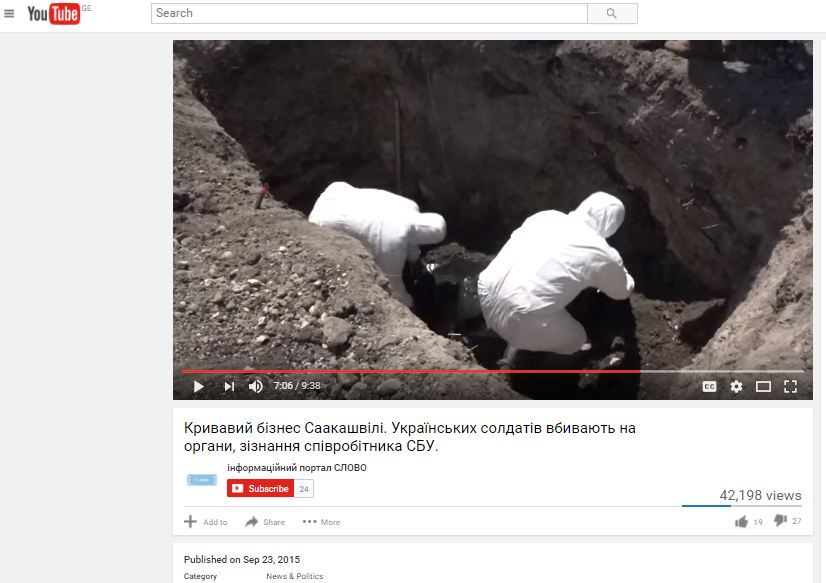 We can see the same footage in the article and video from June 4, 2015 of an informative-analytical portal Юго-Восток (South-East). The reportage of Юго-Восток pictures the exhumation of four deceased soldiers of Ukrainian Armed Forces and transfer of their bodies to the Ukrainian territory for identification in Dnepropetrovsk Morgue. 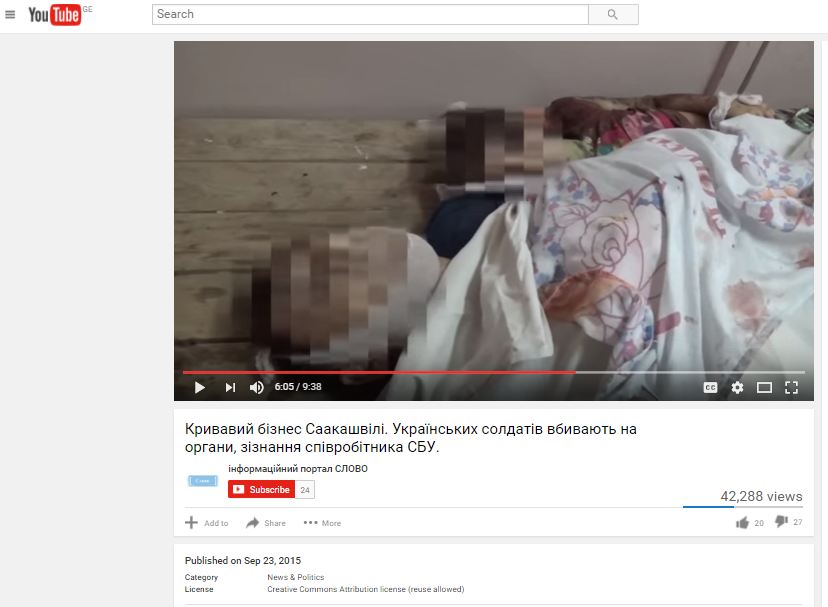 The given footage is a fragment from the video uploaded on Youtube on August 9, 2014 by a user Диванный партизан (Couch partisan). A video containing analogous footages was also uploaded later, on May 5, 2015 by an information portal Hunternews with the title: Трупы детей, убитых украинскими карателями Луганск 18+ (Corpses of children killed by Ukrainian chasteners, Luhansk, 18+).