Disinformation of “Alt-Info” that Russia Does Not Target Civilians 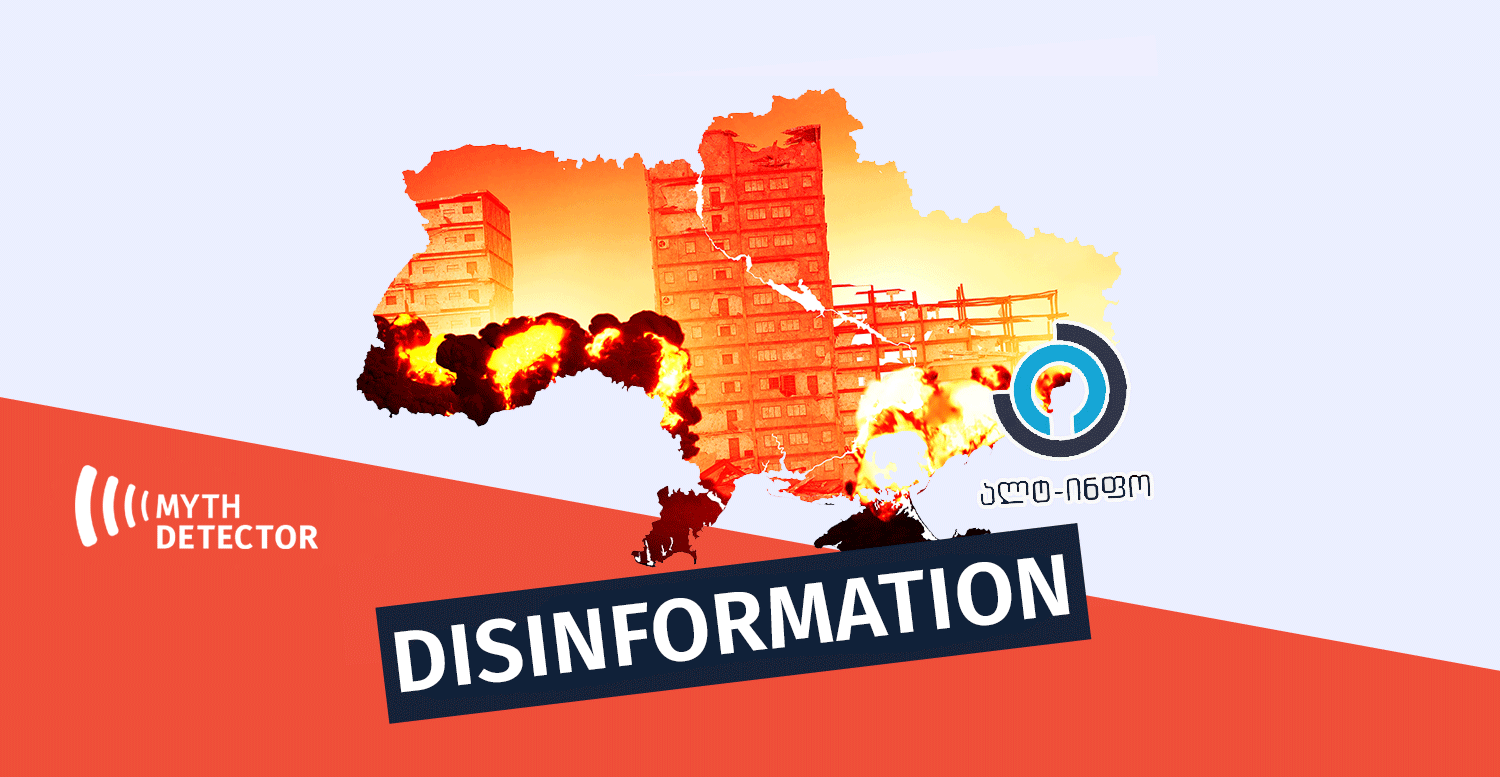 On March 19th, Shota Martinenko, one of the pro-Kremlin TV broadcaster Alt-Info, claimed that the Russian armed forces were not actively bombing settlements in Ukraine because they were avoiding killing civilians. According to Martinenko, this decision is wrong from a military point of view but correct from the moral one. 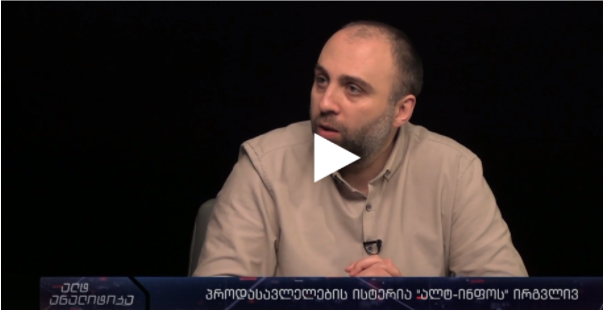 The claim of Shota Martinenko that Russia is not bombing civilians is disinformation. According to the UN, 902 civilians were killed, and 1459 were injured in Ukraine between February 24th and March 19th. Russia has bombed a number of schools, residential buildings and hospitals. Disinformation of this kind that aims to avoid the responsibility for human sacrifice is utilized mainly by the Kremlin government and its propaganda media.

The claim of Shota Martinenko that the Russians are avoiding killing civilians in Ukraine is false. After Russia invaded Ukraine, it bombed a number of buildings where civilians were fleeing, and footage of this is being actively disseminated by local media.

According to the latest data, 902 civilians were killed, and 1459 were injured in Ukraine

According to the latest UN figures, during the Russian invasion of Ukraine and the period from February 24th  to March 19th, 2361 civilians were physically harmed, including 902 killed and 1459 injured. Out of 902 dead, 75 are children.

The UN stressed that the cause of civilian deaths was mainly bombings and airstrikes. The UN also notes that the actual death toll of civilians is much higher. 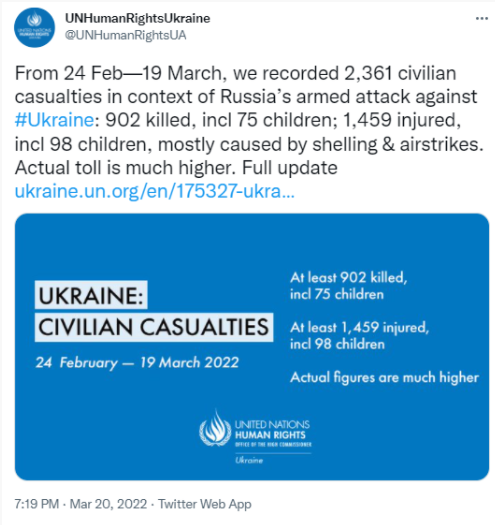 On March 16th, the Russian Armed Forces bombed the Mariupol Drama Theater, sheltering more than 1,000 civilians. The March 14th satellite photos show the front and back of the building having a writing in large letters in Russian – children. 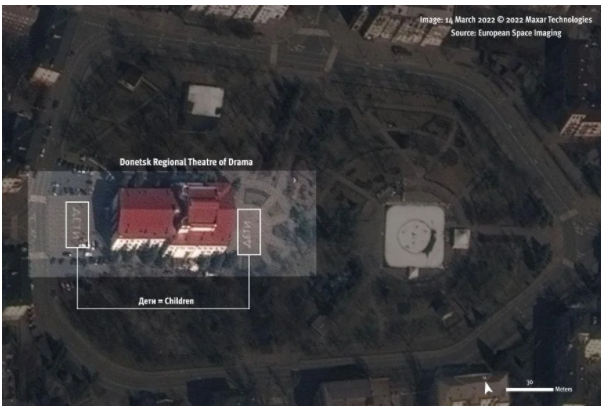 The Russian-language Kremlin media has been spreading disinformation about the Mariupol Theater in the past as well, as if the theatre had been bombed not by Russian aviation but by the Azov Battalion. For more on this topic, see the “Myth Detector” material:

On March 17th, the Prosecutor’s Office of Ukraine stated that there were casualties at the Mariupol Theater, where civilians were in the shelter, although the exact number is unknown. Later, Rada MP Sergi Taruta wrote on his Facebook page that the Mariupol Theater withstood the blow and the people there survived. On March 18th, Ukrainian President Volodymyr Zelenskyy announced that 130 people had been rescued from the rubble of the theatre and rescue work was still ongoing.

Hospitals in Mariupol, Kyiv and Kharkiv

On March 9th, Russian troops bombed the Mariupol maternity house and children’s hospital. The bombing killed three people, including one child, and injured 17 others. Later, another pregnant woman who got injured during the bombing also died along with her child.

Georgian and Russian-language pro-Kremlin sources falsely claimed that the Ukrainian armed forces had set up firing positions in the area of ​​the bombed maternity hospital and that Russia had dropped bombs for this reason. In fact, Mariupol 3rd Hospital, which includes the buildings of the maternity hospital and the children’s polyclinic, was still operating and had a number of pregnant women at the time of the bombing. This can be seen well in the spread photos as well. 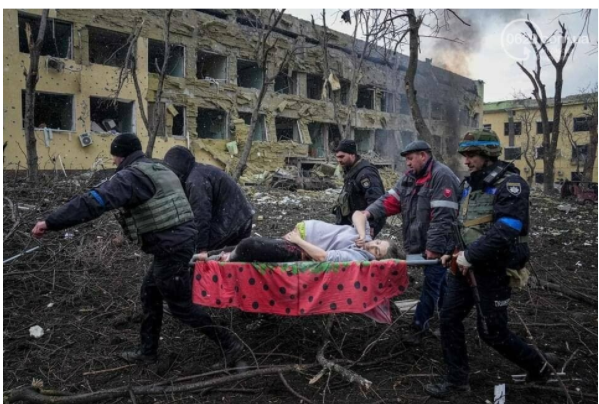 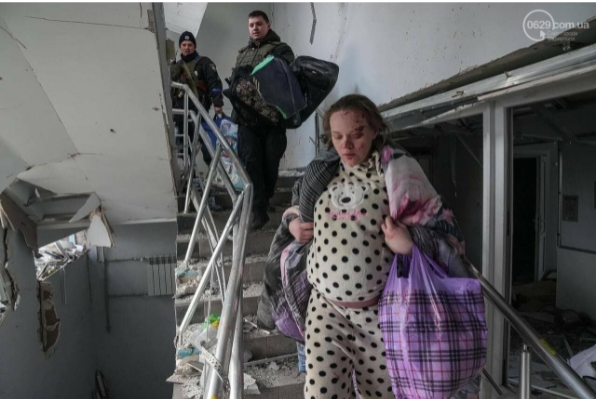 On February 27th, Russians opened fire on the Okhmatdit Children’s Oncology Hospital in Kyiv. One child was killed and four others were injured in the artillery attack, including two children.

Schools in Mykolaiv and Mariupol

On March 13th, Russian aircraft bombed a town in the Mykolaiv region, including a school on Vasily Stus Street. According to the Emergency Situations Service of Ukraine, at least 4 people were killed and 3 were injured after the school bombing. 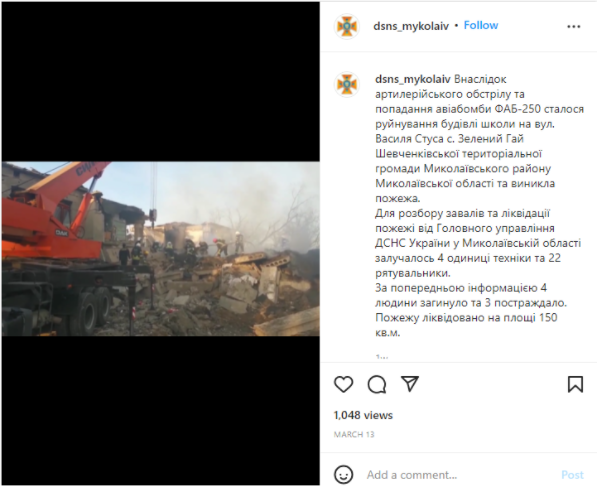 On March 20th, the Art School N12 in Mariupol was bombed, where up to 400 citizens were seeking shelter, information was disseminated by the Mariupol City Council. 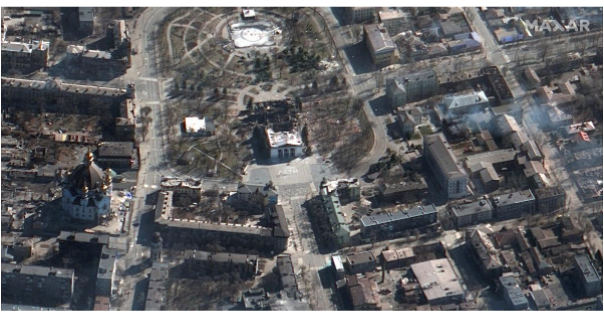 Residential Buildings in Chernihiv and Kyiv

On March 13th, an airstrike by Russian aircraft destroyed a 9-storey residential building in Chernihiv. As a result of the bombing, one person was killed, and one was injured. 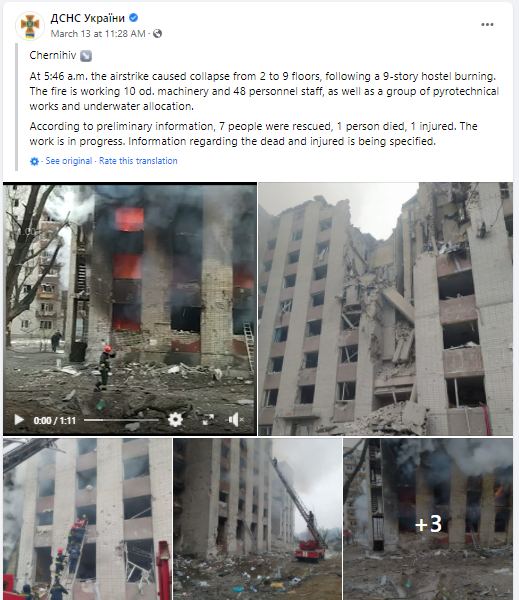 On March 15th, residential buildings were attacked in Kyiv, specifically in two multi-storey and one two-storey houses in the Podolsky and Sviatoshinsky districts. According to the Emergency Situations Service of Ukraine, two people were killed. 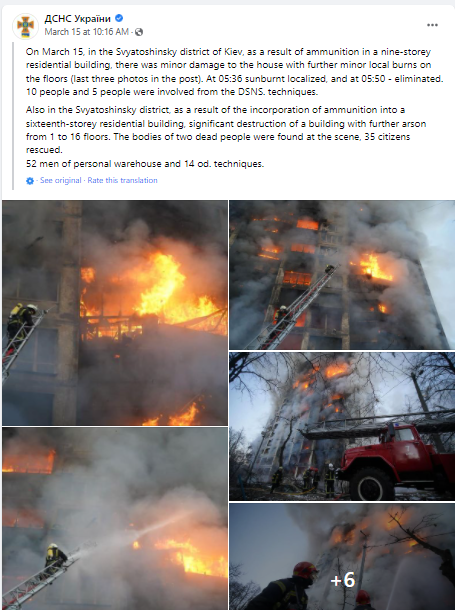 Disinformation that Russia does not pose a threat to the civilian population in Ukraine has been disseminated by the Russian government and other Kremlin propagandists, with the aim of avoiding Russia’s responsibility for human sacrifice. Read more:

Who Threatens the Peaceful Population in Mariupol?