Disinformation: Mayor of Thessaloniki beaten up for supporting LGBT community 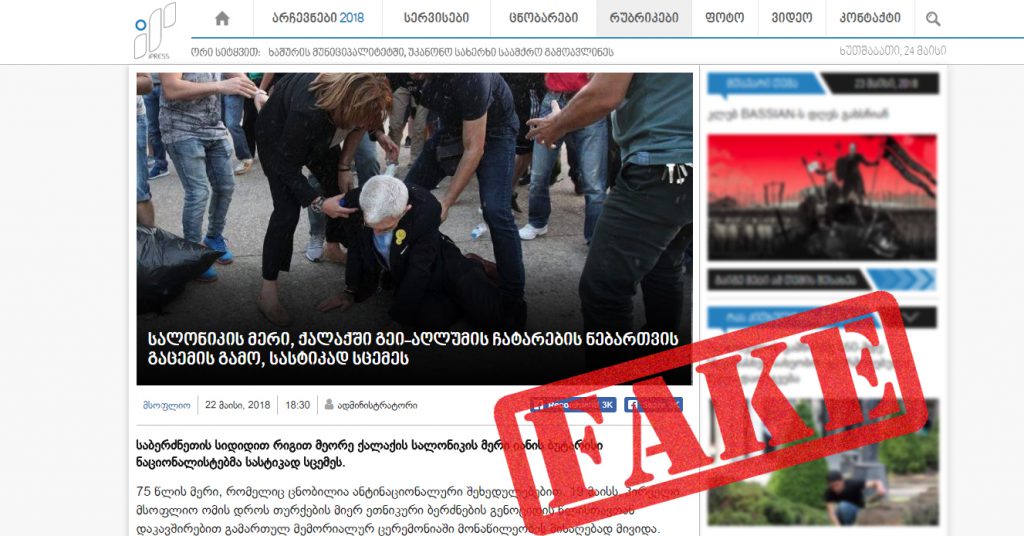 On May 22, 2018, an information portal Ipress published information that the Mayor of Thessaloniki, Yiannis Boutaris, had been attacked due to issuing a permit for conducting a gay pride. The news article by Ipress is a disinformation. It contains falsified facts, as the attack on the Mayor of Thessaloniki was not associated with the LGBT community. The reason behind the attack carried out by Greek ultra-nationalists was him attending a genocide-related event. The material by Ipress misleads the reader by portraying that the Western society allegedly answers the support of LGBT community by politicians with violence.

In fact, the 75-year-old Mayor has been physically abused on a gathering on May 19, which was devoted to the memory of the victims of genocide in 1913-1922. The fact that Boutaris appeared at the gathering, caused irritation of the Greek ultra-nationalists, as Boutaris stands out with ideas such as the reconciliation of FYROM and Turkey, praise of the founder of the modern Turkish state, Kemal Atatürk and an anti-nationalist agenda. The appearance of an anti-nationalist man at the event devoted to genocide became a reason for violence from ultra-nationalist groups, and the violence is not related to the support of the LGBT community at all. According to a famous British edition, the Guardian, the attackers were connected with the neo-fascist political party “Golden Dawn”. It is the third largest party in the country. Golden Dawn has strong ties with a Russian neo-Nazi group “Русский образ”, which, in turn, has covert ties with Russian secret services and Putin’s party – “United Russia”. Russia’s main ideologue, Alexandr Dugin, openly supported Golden Dawn.

The Prime Minister of Greece and other politicians condemned the attack on the Mayor and evaluated it as “a direct threat towards democracy and society”.