Disinformation: ECHR failed to react when human rights were violated during the time of UNM 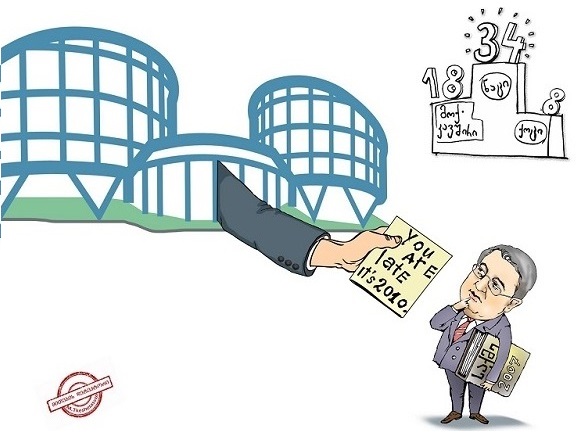 Ever since the European Court of Human Rights (ECHR) prevented the execution of the judgment passed by Georgian Supreme Court regarding the Rustavi 2 case, a lot of misinformation has spread throughout Georgian media about ECHR. A predominant idea, within the latter misconceptions, being that the European Court did not react to violations of Human Rights, during the period of United National Movement’s government.

Zaza Davitaia, journalist: “Because Saakashvili’s regime wasn’t killing people amidst the silence of the European Court? Except for a few cases, why wasn’t the European Court even responding to incidents of torture during that period?” (13th March)

Democratic Movement –United Georgia’s representative Giorgi Akhvlediani was attesting, that ECHR failed to respond immediately to the filed complaint regarding the raid in Television Company Imedi, in November of 2007.

Giorgi Akhvlediani, Democratic Movement –United Georgia: “We instantly sent a lawsuit to the ECHR concerning the fact that they destroyed the TV company, violently broke into our building, kicked us out, they were firing at journalists like rabbits, the officers of the Special Unit were mocking us, they took Imedi away from us and from its owners. Our suit remained in Strasbourg for 6 years, without anyone laying a hand on it, not one single sheet of paper was looked at.” (7th March)

Both these statements are false, since most of ECHR decisions (34) formulated against Georgia were made exactly in regards to the Rights that were being violated during the United National Movement’s government; whereas the case “Akhvlediani and Others v. Georgia” was rejected due to the fact that Giorgi Akhvlediani, along with other applicants, addressed the Georgian Prosecutor’s Office 2 years, and the European Court 3 years after the incident.

Akhvlediani and Others v. Georgia. In its judgment, the European Court of Human Rights referred to the circumstances that caused the hearing to be delayed:

“The Court observes that the police raid on Imedi took place on 7 November 2007, whereas the applicants filed complaints with the Tbilisi City public prosecutor, expressing their interest towards the investigation, for the first time as late as 4 and 22 December 2009. Thus, for more than two years the applicants did not show the slightest interest in having the relevant facts elucidated through a criminal investigation at the domestic level, despite the fact that they, as main witnesses and victims of the alleged ill-treatment, were never summoned and questioned throughout this long period.”

Akhvlediani is additionally spreading incorrect information regarding the alleged delay of his complaint in the European Court, since he addressed the ECHR in 2010, while the Chamber made its judgment in 2013.

ECHR judgments towards Georgia throughout various governments. As the table below shows, the European Court has made 521 (not including settlements) judgments against Georgia in total, out of which 34 (65%) was violated Rights during UNM government, whereas 18 (35%) during the government of the Union of Citizens of Georgia. The same table indicates that in the course of the Citizens’ Union government, the right that was the most frequently infringed upon was the right to a fair trial (article 6 of the Convention); on the other hand, most of the judgments existing against the UNM government consist in prohibition of torture, and inhumane or degrading treatment (article 3 of the Convention).

1 These data does not include cases with friendly settlement 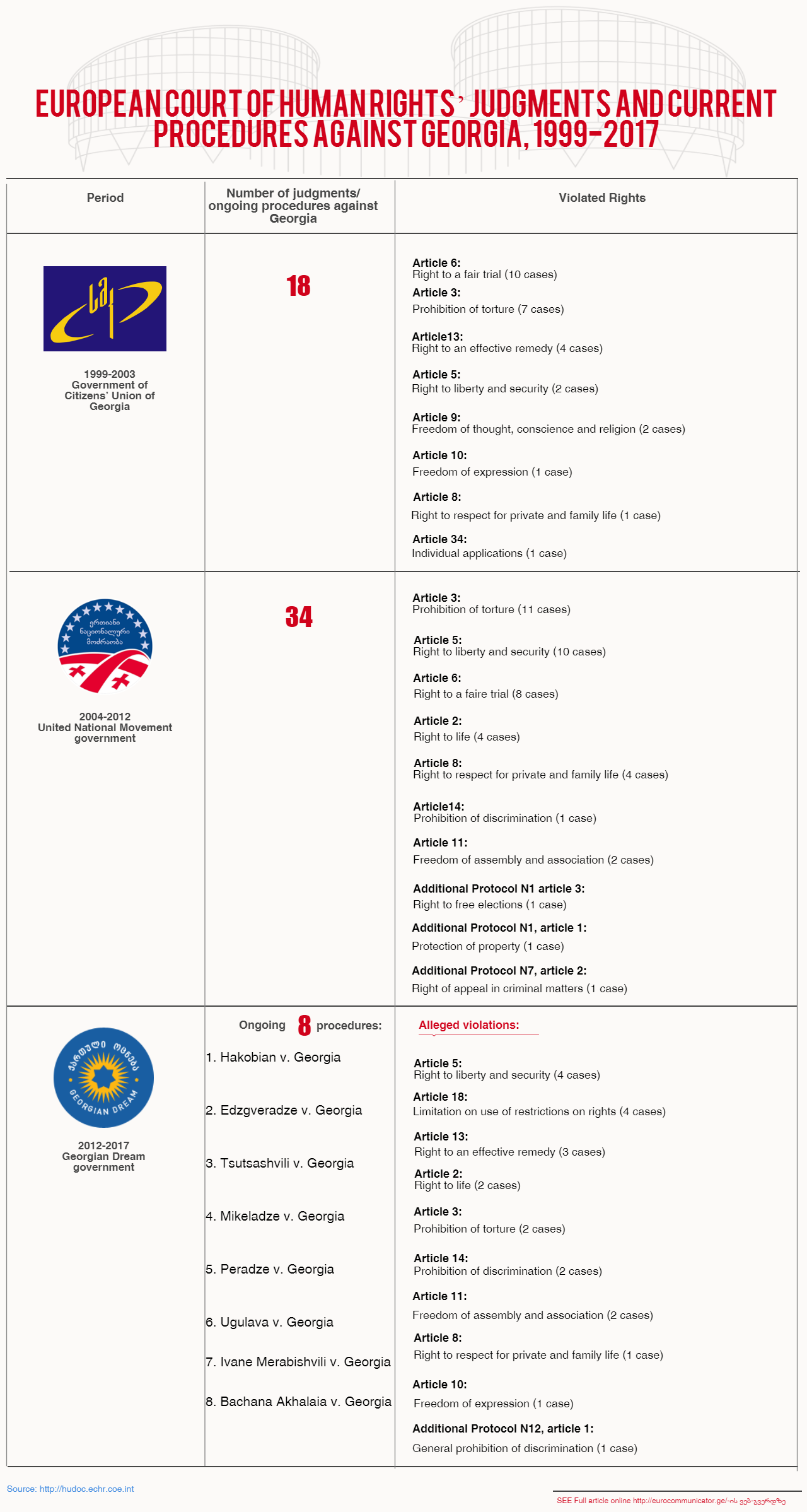 High-profile cases in the course of each government:

a)Asanidze v. Georgia –Tamaz Asanidze, along with his brother, was arrested in 1993 on allegations of assault on Aslan Abashidze. ECHR concluded an infringement on the right to a fair trial, as well as an illegal restriction of liberty towards Asanidze.

b)Gorelishvili v. Georgia –The European Court released its judgement in 2007, although the violation of the citizen’s rights occurred during the Citizens’ Union government. In July 2000, journalist Gorelishvili published an article in “Meridiani 44” that criticised a member of the Parliament on account of his declared assets, and accused him of corruption. Due to such defamations, the MP sued the journalist; while the Supreme Court urged the journalist to deny the charges. ECHR concluded a violation of article 10 of the Convention on behalf of the journalist Gorelashvili, suggesting a restriction of freedom of expression.

a)Enukidze and Girgvliani v. Georgia –the case covers the murder of Sandro Girgvliani by four employees of the Ministry of Internal Affairs in 2006. The European Court judged a procedural violation of article 2 of the Convention regarding the right to life, lack of an effective investigation of the latter murder, and an infringement of article 38, in relation to the hearing and conciliaiton of the procedure.

b)Identity and Others v. Georgia –on 17th May 2012, counter-protesters physically and verbally abused members and activists of LGBT organisation « Identity », who were marching in honor of the International Day against homophobia in the center of the city. ECHR concluded a violation of prohibition of discrimination in relation to article 3 of the Convention (Prohibiton of torture), as well as in relation to article 11, which focuses on the freedom of assembly and association.

a)Ivane Merabishvili v. Georgia –Georgia’s former Prime Minister Ivane Merabishvili was arrested in 2013, and charged to five years in prison in 2014. A Chamber of ECHR composed of 7 judges determined a violation of article 18 of the Convention towards Merabishvili, which is a prohibition of pre-trial detention for other purposes. This is the first time in history of Georgia that Article 18 of the Convention has been infringed upon. The Grand Chamber began the reevaluation of the former Chamber’s judgement on March 8th, 2017. The violation of the same Article is also being argued in cases “Akhalaia v. Georgia” and “Ugulava v. Georgia”.

A cordial settlement is an arrangement between opposing parties, which aims to complete the suit filed by the applicant at the court hearing. ECHR encourages the practice of such agreements and amiable settlements and continues to examine the litigation, in case the parties fail to come to a consensus. The latter practice was also activated by the Ministry of Justice following the years 2012. In years 2004-2012 only 5 cases were closed on the basis of a settlement, whereas in the years 2012-2017 –69 cases. 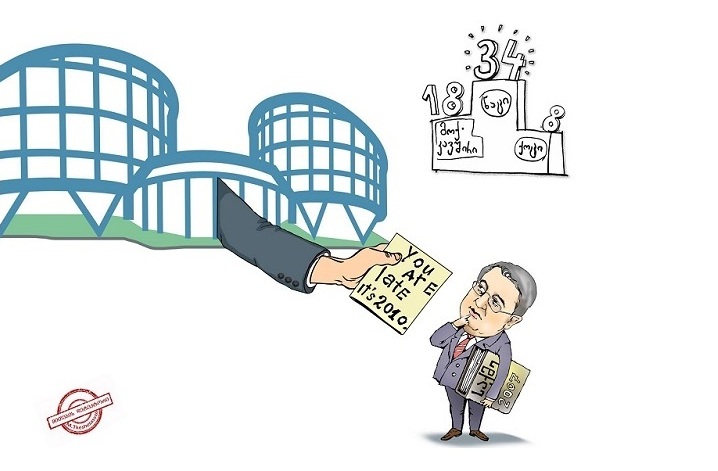