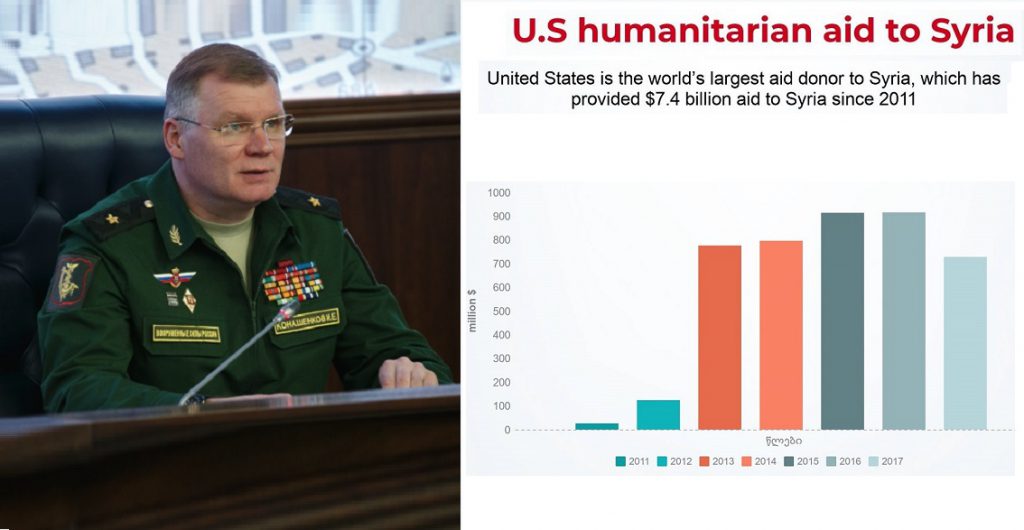 On May 4, an official representative of the Ministry of Defense of Russia, Igor Konashenkov, accused the United States of blocking humanitarian aid flow to the Syrian refugees and noted that the United States Government claims to be caring about Syrians, while actually blocking the flow of humanitarian aid to the refugee camps and preferring to help only those, who are controlled by terrorists. For instance, Konashenkov mentioned Rukban refugee camp, where, according to Konashenkov, 50,000 people needed aid. His statement was aired by the First Channel of Russia and Россия 1 in their respective news reports – Время and Вести Недели – on May 4-6. The reports were devoted to the ongoing developments in Syria.

Rukban refugee camp crisis started even before the foundation of an American base in al-Tanf region. The Russian Government’s claim that the United States are the only responsible side for the crisis, is groundless, as providing humanitarian aid to the refugee camp requires efforts from the governments of Syria, Russia, and Jordan, as well. According to USAID data, the United States provided humanitarian aid worth USD 7.4 billion to Syria in 2011-2017.

Fact #1. Rukban refugee camp crisis began before the creation of the American military base in al-Tanf region. In addition, the provision of humanitarian aid requires effort not only from the Americans, but also from the governments of Syria, Russia, and Jordan.

According to Polygraph.info, which, in turn, bases upon a joint document by the United Nations, Red Cross, WHO and other actors, called “Inter-agency Operational Plan for delivery of a humanitarian aid to Rukban camp”, the crisis of Rukban camp started in 2014, from the moment of a spontaneous formation of the camp, not after the creation of the American base in al-Tanf region. The document also notes that the provision of humanitarian aid to Rukban requires security guarantees from the governments of Syria, the Russian Federation, the United States, and Jordan. Therefore, Russia’s claim that the United States is the sole responsible party for the crisis, is ungrounded.

As the international coalition explained, during the conflict, coalitional forces provided humanitarian aid to the UN representatives placed at Rukban camp, on several occasions. Moreover, the coalition, while communicating with Russia, expressed readiness several times to provide the humanitarian aid, however, the Syrian regime has been permanently preventing this effort.

Fact #2. The United States is the number one donor.

Since the start of the War in Syria, the United States has bee allocating funds to Syria, which is mainly used to solve problems related to food, clean water, medical aid, shelter, education, sanitary, and hygiene. According to the United States Agency for International Development (USAID), in 2011-2017, the United States allocated USD 7.4 billion in humanitarian aid to Syria.

Table 1. Humanitarian aid provided by the United States to Syria in 2011-2017 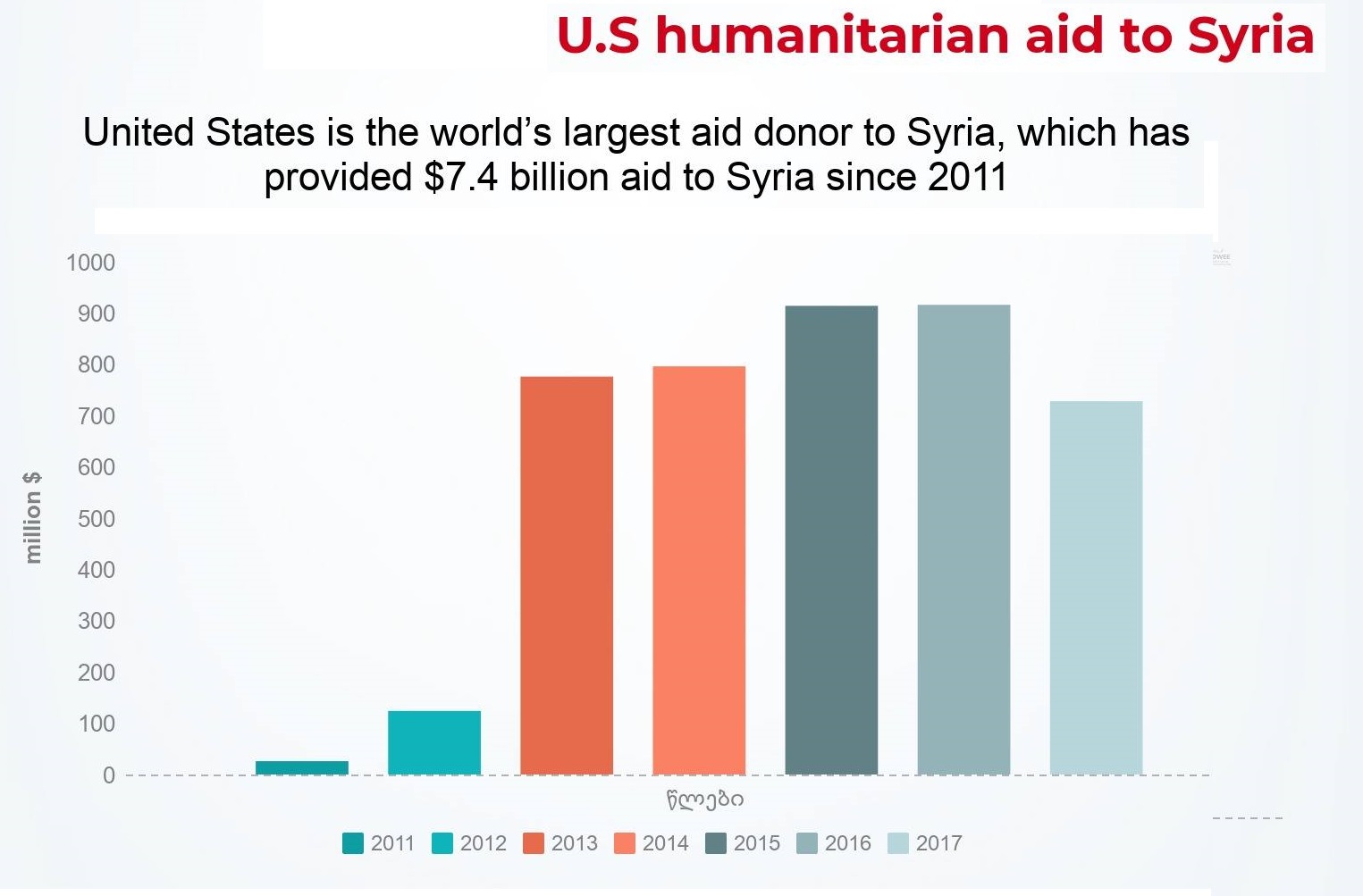 Fact #3. In Syria, 23 American organizations are providing aid to the crisis-affected population.

There are 23 American organizations that work in different directions in Syria.

The following link contains a detailed description of the aforementioned organizations and their activities.

Fact #4. United States is the largest humanitarian aid donor in the world. 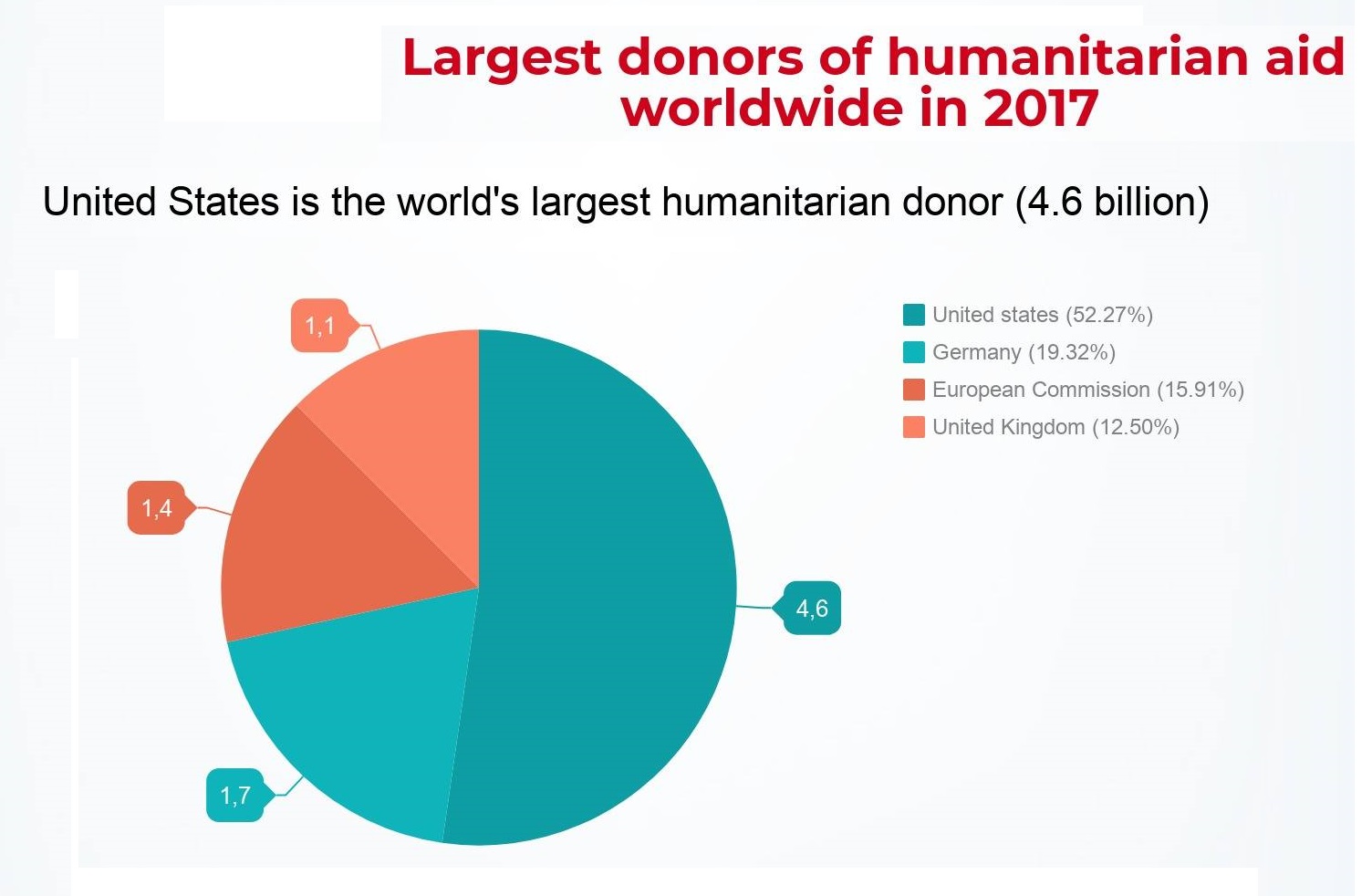 The accusation that the United States has allegedly been blocking the provision of humanitarian aid to 50,000 refugees in Syria is periodically disseminated by the representatives of the Government of Russia and media outlets. The Joint Staff of the Russian Armed Forces and the Ministry of Defense are usually the sources of the message. They connect the Rukban crisis to the existence of the coalition military base in al-Tanf. However, they fail to provide any evidence for their accusations. In February 2018, a Russian information agency RIA Novosti disseminated disinformation that the House of Representatives of the United States adopted a law, which banned providing aid to Syria. In reality, the law adopted on April 24 did not ban the provision of aid, but rather set certain restrictions on aid beneficiaries, which concerns Bashar al-Assad’s government and his allies.