Disinformation by the “Alliance of Patriots”, as if no program in Georgia is funded by NATO and USA 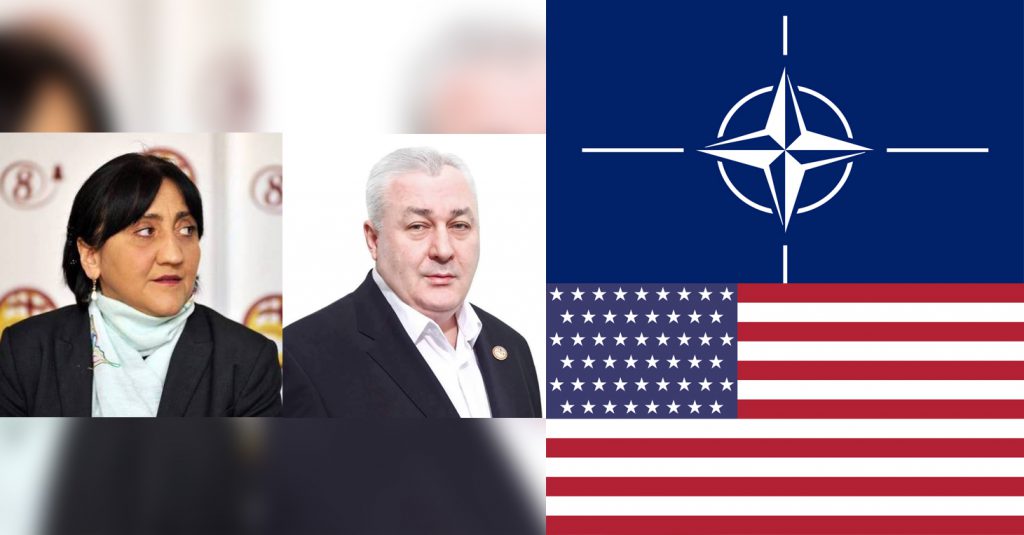 Irma Inashvili: „All these programs, that exist and people think, that they are funded by USA and mainly, 100% funded by NATO, in reality that is not the case. There is complicity with insignificant grants, replica by David Tarkhan-Mouravi: [„We finance 100%“] but our funding is 100 percent, it is fair to say. “

The statements by the leaders of the “Alliance of Patriots”, Irma Inashvili and David Tarkhan-Mouravi, as if no project in Georgia is funded by NATO and USA, is a disinformation. Financial assistance allocated by the USA to Georgia in the military field in 2015-2019 is 167 million US dollars. NATO and USA organize and support the exercises of Georgian soldiers, naval and coastal forces, programs for upgrading military qualification and professional education, acquisition of military equipment and other necessary equipment that aims to strengthen defense capability of the country.

1. In 2015-2019, financial assistance in military sphere allocated by the USA to Georgia was 167 million US dollars.

In this period, the amount allocated by the USA to Georgia for military education and training was 10.8 million US dollars.

National Defense Authorization Act of the USA envisages the assistance for Georgia’s Security Sector, including „Defensive Lethal Assistance”, aiming to strengthen Georgia’s defense capability and readiness, as well as to improve interoperability with NATO’s forces, to examine increasing the frequency, scale and scope of NATO exercises and other multilateral exercises in the Black Sea with participation of Ukraine and Georgia and to affirm support for the NATO’s “open door policy”, including Georgia’s eventual membership in NATO.

Participation of Georgian troops in Peacekeeping Mission in Afghanistan – ”Resolute Support Mission” through Coalition Readiness Support Program is funded by the USA, for which it has allocated 200 million US dollars in 2010-2018.

Military exercises play the most important role in training of Georgian soldiers and upgrading their qualification. Georgia hosts various military exercises, including “Noble Partner” and “Agile Spirit”, organized by the USA and its partners.

Current projects in the area of defense funded by the USA:

In April 2019, NATO approved the “ Black Sea package ”. The framework of the package envisages training of Georgia’s naval forces and Coast guard service, paying visits to ports and sharing information. In addition, NATO vessels will participate in exercise together with Ukrainian and Georgian vessels.

On March 18, 2019, NATO-Georgia exercise started at NATO-Georgia Joint Training and Evaluation Center (JTEC), Krtsanisi National Training Center. Three hundred and fifty soldiers from 21 NATO member states and 3 partner states participate in the exercise. The aim of the exercises held in the framework of Substantial NATO-Georgia Package is to strengthen Georgia’s defense capability.

In 2018, Georgia and NATO signed an agreement, based on which the vehicles worth more than million Euros will be transferred to the NATO-Georgia Joint Training and Evaluation Center (JTEC).

In 2016 and 2017, Germany twice has allocated 500 000 Euros for the Defense Institution Building School of Georgia and other projects envisaged in Substantial NATO-Georgia Package, including for Krtsanisi National Training Center. Germany’s Ambassador to NATO Hans-Dieter Lucas announced in December 2018 about the allocation of additional 500 000-Euro assistance for the projects to be implemented in the framework of the Substantial NATO-Georgia Package.

According to the handbook of defense programs of the Ministry of Defense of Georgia, participation of Georgian armed forces in international peacekeeping operations and observation/training missions plays an important role in support of the national interests of Georgia, including Euro-Atlantic integration, interoperability with NATO and enhancing the cooperation in defense policy framework. Accordingly, the Ministry of Defense funds these requirements, with the aim to ensure the full readiness of structural subdivisions for the participation in these operations. In addition, to cover some of the expenses connected with participation in international missions, Georgia periodically gets financial assistance from the partners. For instance, USA and Germany cover expenses connected with deployment of troops to Afghanistan.