Disinformation by Saqinform, as if majority of Georgia’s citizens is against the Euro- Atlantic course 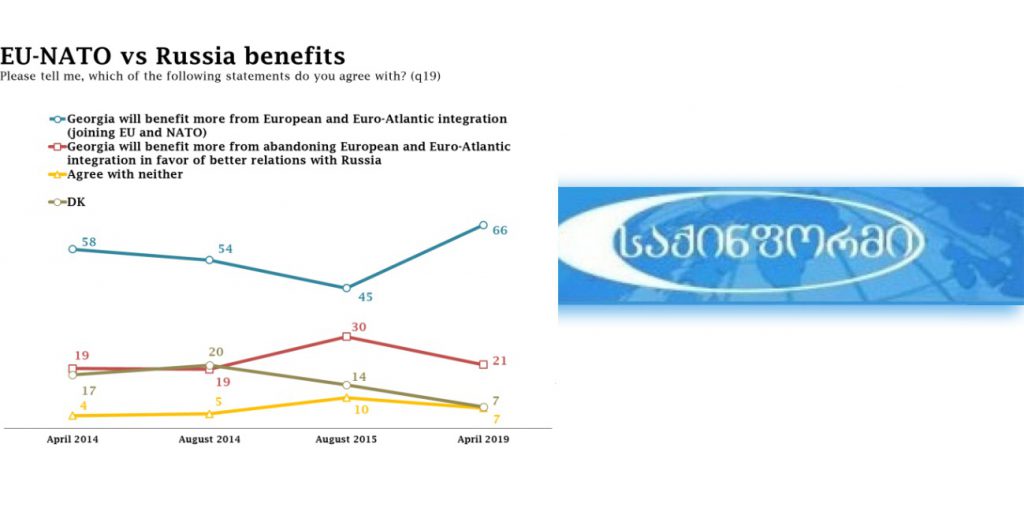 On May 20, 2019, “Saqinform” published an article, which refers to the research held by the Ipsos organization. According to the research, 68% of the population considers that Georgia is developing in the wrong direction. „Saqinform“ covered the research results with subjective interpretation and artificially connected “developing in the wrong direction” to the Euro-Atlantic course of the country. According to “Saqinform”, the majority is against the path towards Euro-integration and supports the restoration of full diplomatic relations and partnership with Russian Federation.

The statement by “Saqinform” edition as if majority of Georgian population does not support Georgia’s Euro-Atlantic course and prefers cooperation with Russian Federation, is a disinformation. The research by Ipsos refers not to the foreign political course of the country, but to the domestic politics, and no questions have been asked concerning NATO and the EU in the framework of the survey.

According to the National Democratic Institute (NDI) survey of April 2019, 66% of the population considers that “Georgia will benefit more by European and Euro-Atlantic integration”, while 47% considers that Russia makes a negative impact on the national security of Georgia.

Ipsos Company’s Ukrainian branch has conducted a research in Georgia on the question “In what direction does the country move?” by Rustavi 2’s order. According to the results, 69% of the surveyed population states, that Georgia is on a wrong path, while 20% considers that the country has chosen the right course.

The research conducted, was not about Georgia’s foreign political course, but about the attitudes of the population towards the government and other political parties. Accordingly, the question also includes Georgia’s population evaluation of how well the government of the country works. Main challenges named were the economy and the question of territorial integrity, taking care of the socially disadvantaged and pensioners, education, science and healthcare.

All the questions in the research refer to the domestic politics of the country, government’s party and opposition’s activity, also to the evaluation of the role of concrete politicians. In the framework of noted survey, no questions concerning NATO and EU have been asked, accordingly, the question “In general, how do you think, does our country go in the right or wrong direction?” The respondents may also have considered in the context of domestic politics.

In the framework of joint research by NDI and CRRC from April 2019, there was a question on how much is Georgia’s membership into the EU and NATO approved? For the 73% of the surveyed, membership in the EU is acceptable, while 56% fully supports integration. 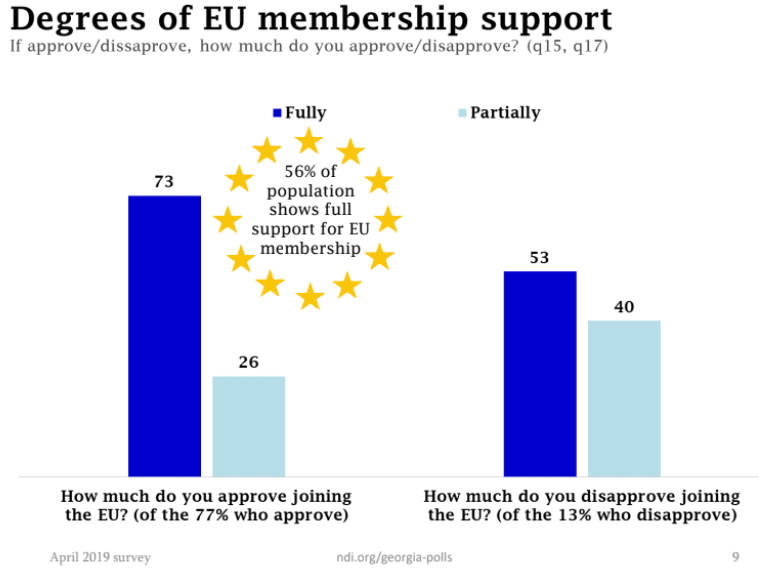 In a response to the same question about NATO, 74% of the population stated, that Georgia’s integration into NATO is acceptable for them, while 55% fully supports Georgian membership in NATO. 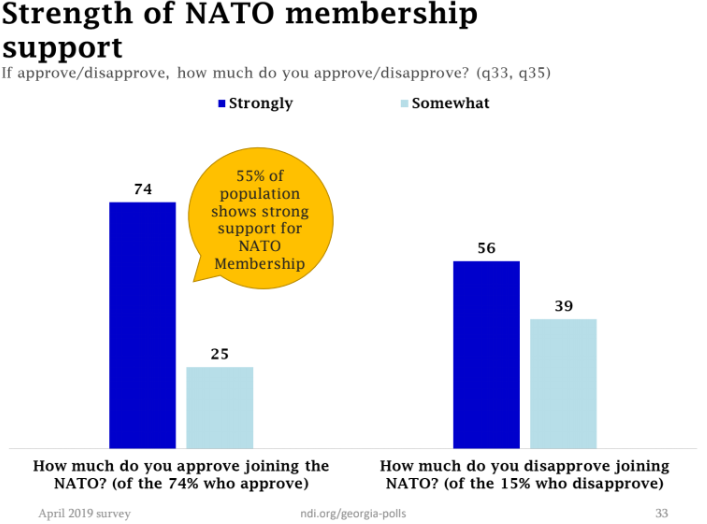 66% of the surveyed consider that if Georgia becomes a member of the EU, Georgia’s security will improve. In addition, 66% agreed with the statement “Georgia will benefit more by European and Euro-Atlantic integration.” 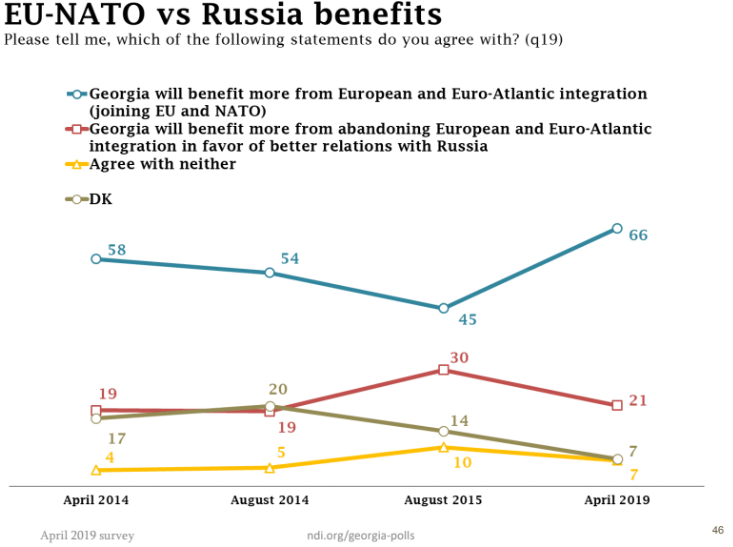 To the question “if there were a referendum tomorrow regarding Georgia’s membership in the European Union, would you vote for it or against it?” 68% of the surveyed gave a positive answer. 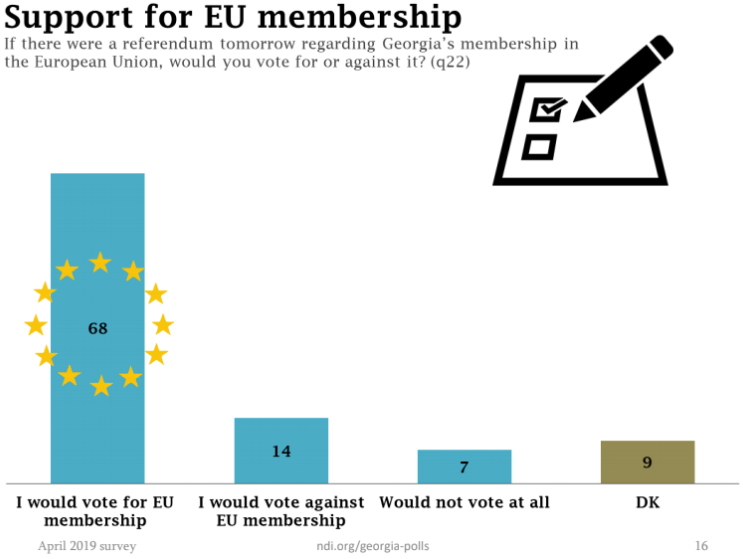 As for Russia, only 21% shared an opinion that “Georgia will benefit more, if he says “no” to the European and Euro-Atlantic integration” in return to establishing better relationships with Russia.

Only 7% of the population believes that Russia makes positive impact on Georgia’s security, while 47% considers that it makes a negative impact. More concretely, the data are as follows: 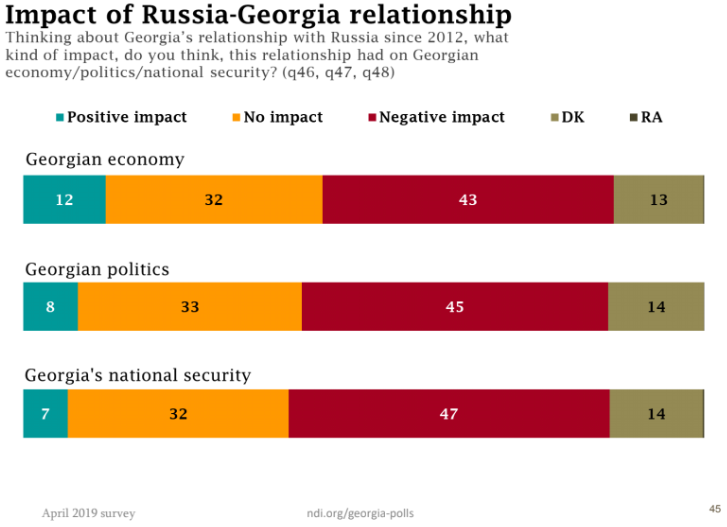