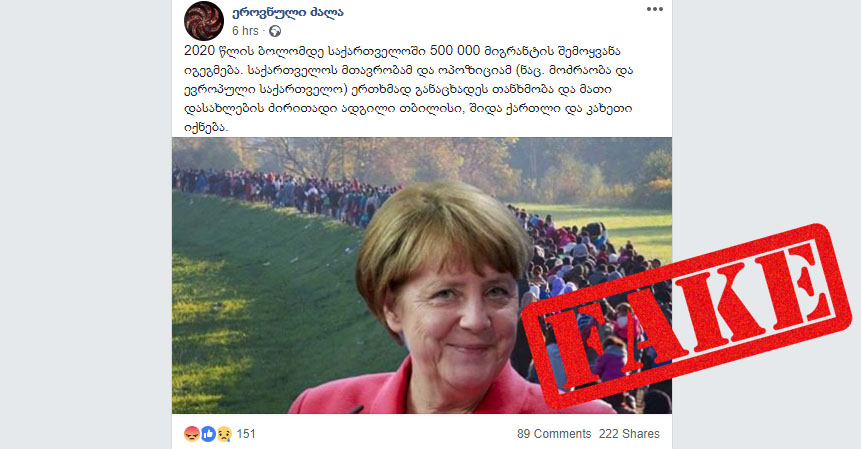 On October 3, an ultra-nationalist movement National Force wrote on its Facebook page that it is planned to bring 500 000 migrants to Georgia before the end of 2020 and that the government and the opposition (the National Movement and European Georgia) have given their consent to it. National Force posts disinformation with an accompanying manipulative image, depicting German Chancellor Angela Merkel with the flow of migrants in the background. Various actors tried to link Angela Merkel’s August visit to Georgia to the latter’s obligation to accept migrants. The remarks about the visit allegedly linked to Georgia’s obligation to accept migrants were made by Jondi Bagaturia, leader of the Georgian Troupe party, and political analyst Avigdor Eskin (see the material on the same topic).

Disinformation about the European Union allegedly obliging Georgia to accept Syrian refugees has long been disseminated. For example, in the interview with Georgian tabloid Asaval-Dasavali in 2016, Dimitri Lortkipanidze, formerly member of a pro-Russian political party United Democratic Movement and presently the director of the Primakov Georgian-Russian Public Center, claimed that the Readmission Agreement signed with the European Union obliges Georgia to accept Syrian refugees. Far-right groups use disinformation as if Georgia is forced to accept migrants for inciting anti-migrant and anti-Western sentiments.