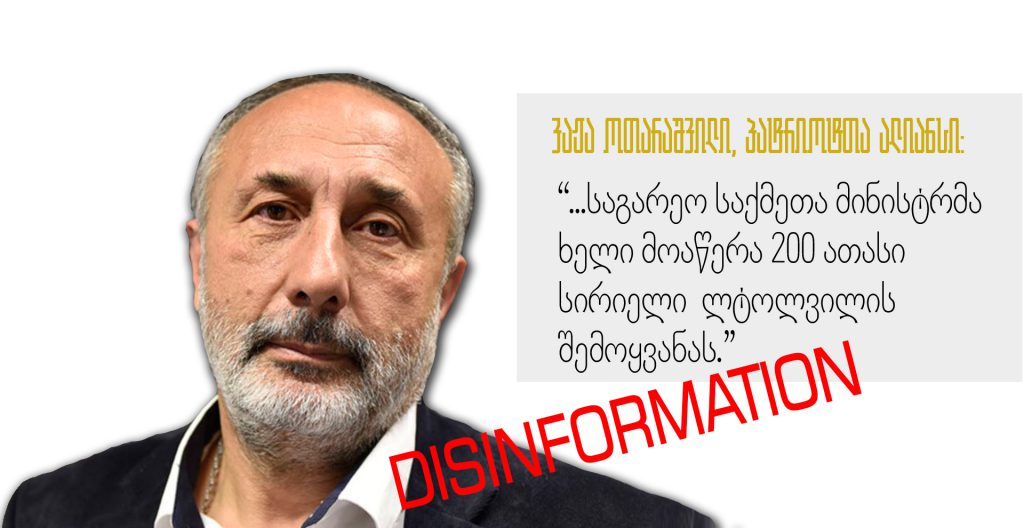 On September 25, 2019, Georgia and World released an article headlined “Vazha Otarashvili: Let them visit any Arabic “bar” at Agmashenebeli Avenue or near the Parliament and they will see the pornography of Georgian teenagers.” Vazha Otarashvili of the Alliance of Patriots party said in the article that Foreign Minister Davit Zalkaliani has signed a decree on accepting 200 000 Syrian refugees by Georgia. He also noted that following this reform, the word “Georgian” will become nominal in the future.

Vazha Otarashvili, Alliance of Patriots: “I want the Georgian nation to know that our perfidious Foreign Minister has signed the document on bringing 200 000 so called Syrian refugees to Georgia. Now, someone may think that it is a fantasy, but it will be a huge wave readdressed by Europe to Georgia. We will accept this Arabic flow quite soon and see the results – in about 10 years, Georgian youth will be mixed with so called refugees and in a long-term perspective, a concept “Georgian” will become something nominal.”

The claim as if the Foreign Minister has signed a decree on bringing Syrian refugees to Georgia is disinformation. The Myth Detector contacted the Foreign Ministry with the latter responding that the information is not true and that the same fake news was first spread a year ago.

The Ministry of Foreign Affairs of Georgia, press office: “This story was first spread last year and we have already responded to it. It is not correct information, we cannot confirm this fact.” .

The pro-Kremlin actors started to spread disinformation about the obligation to accept refugees from the Middle East, first, in the context of the Association Agreement with the EU and then “the UN compact.”

In December 2018, the same disinformation was spread by Irma Inashvili, leader of Alliance of Patriots, Jondi Bagaturia, leader of Georgian Troupe and Dimitri Lortkipanidze, director of the Primakov Georgian-Russian Public Center. On December 24, Jondi Bagaturia held a rally outside the Foreign Ministry to protest against Georgia’s signing the UN Compact for Migration. Bagaturia and his supporters claimed that the compact involved an obligation to Georgia for accepting refugees from various countries.

The document with the full name “Global Compact for Safe, Orderly and Regular Migration” was officially endorsed at the session of the UN General Assembly in New York on December 19, following the intergovernmental conference held in Marrakech, Morocco on December 10-11, 2018. The UN Compact represents continuation of the New York Declaration on Refugees and Migrants, to which Georgia is a party.

The Compact is focused on cooperation between the states to regulate migration policy. The document does not involve any legal obligation to the parties for accepting migrants.