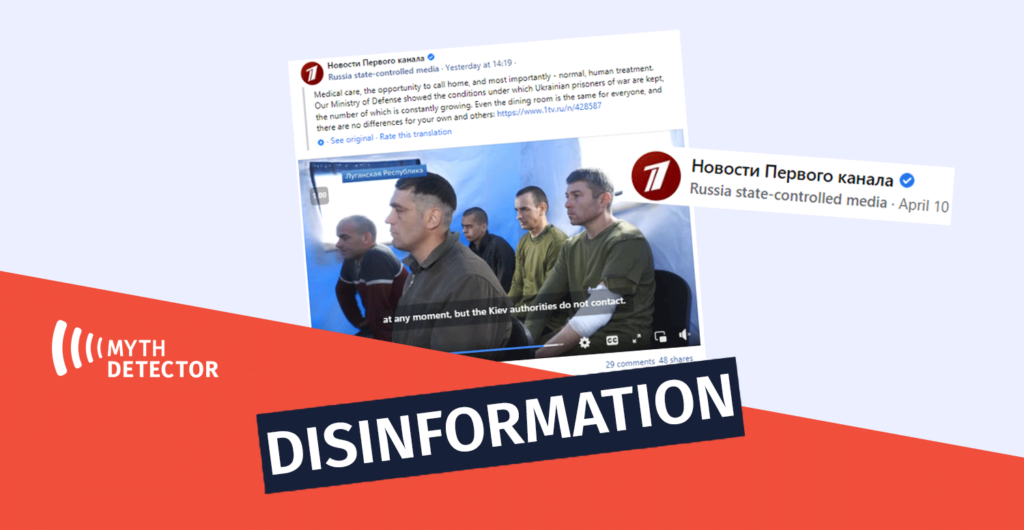 On April 10th, the Russian Channel One’s “Новости Первого канала” aired a story about Ukrainian hostages, claiming that they are in very good condition, have three meals a day and the possibility of personal hygiene and medical care. At the end of the story, the journalist says that the Ukrainian authorities are not interested in the fate of the captives at all and do not engage in negotiations with Russia. 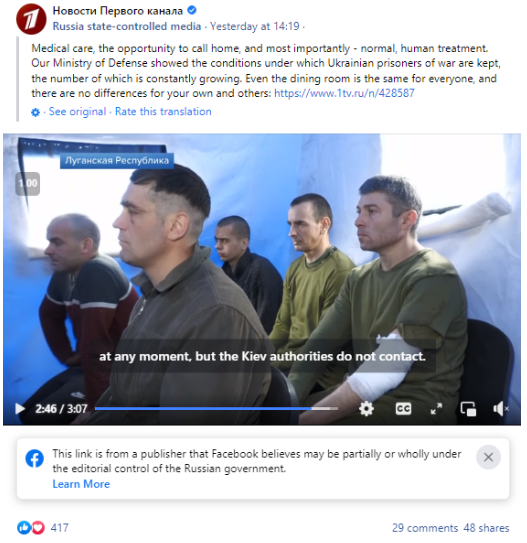 The claim that the Ukrainian Government is not interested in the fate of the hostages and refuses to engage in negotiation with Russia is false. As of May 6th, Russia and Ukraine exchanged hostages ten times, resulting in the release of at least 331 Ukrainian citizens (including soldiers and peaceful civilians).

Ukraine and Russia last exchanged hostages on May 6th. As a result of this exchange, 41 people, 28 military and 13 civilians, returned to Ukraine. Among those released was the head of one of the Ukrainian Orthodox Churches.

The exchange of hostages between Russia and Ukraine also took place on April 30th, during which 14 Ukrainian captives: seven soldiers and seven civilians were released. One of the military women was 5 months pregnant.

Even earlier, on April 28th, 45 Ukrainians were released from hostage.

This was announced by the Deputy Prime Minister and Minister of Reintegration of the temporarily occupied territories, Iryna Vereshchuk. Among those released were 13 officers and 20 soldiers (5 of whom were wounded), while 12 were civilians.

Notably, at the moment, Ukraine is negotiating with Russia on the evacuation of wounded fighters from “Azovstal” in the city of Mariupol. According to the Minister of Reintegration of Ukraine, Ukraine is primarily working to exchange fighters that are in dire condition. On May 11th, Vereshchuk announced the talks on the exchange of prisoners between Russia and Ukraine, saying that an agreement had not yet been reached and that negotiations were still ongoing.

When did the exchange of captives begin and how many people have already been exchanged?

The first full-fledged exchange of prisoners took place on March 24th – when 10 Ukrainian soldiers were exchanged for 10 Russian ones. According to Volodymyr Zelenskyy, among those released were Ukrainian border guards on the island of Zmein in the Black Sea.

On April 1st, the second round of exchange of prisoners took place, after which 86 Ukrainian soldiers were released.

On April 9th, Russia and Ukraine exchanged hostages for the third time. Out of 26 people, 12 Ukrainian servicemen (including one female officer) and 14 civilians (including 9 women) returned home.

On April 14th, Russia and Ukraine exchanged hostages for the fourth time: 5 officers, 17 servicemen and 8 civilians (one of whom was a woman) returned to Ukraine.

On April 19th, during the fifth exchange of prisoners of war between Ukraine and Russia, 60 servicemen (10 of them officers) and 16 civilians were released.

As a result of the sixth exchange of captives on April 21st, 19 Ukrainian nationals returned home, including 10 military personnel (including two officers).

A total of 331 captives returned to Ukraine between March 24th and May 6th, including both military personnel and civilians.