Disinformation as if the U.S. did not React to Human Rights Violations during the UNM Era 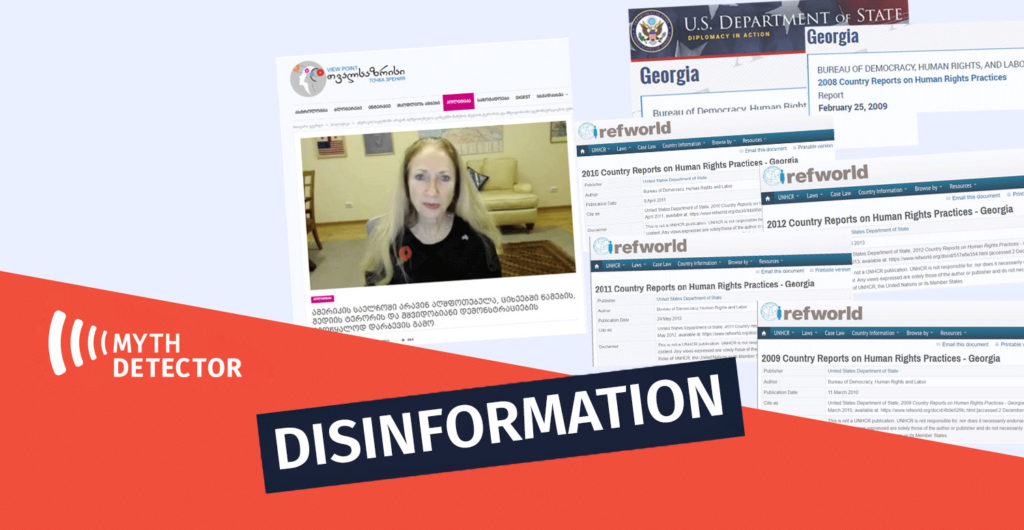 On November 26th, the website “tvalsazrisi.ge” published Irakli Jankarashvili’s article with the headline “No one at the U.S. Embassy was outraged by torture in prisons, media terror and the merciless dispersal of peaceful demonstrators.” According to Jankarashvili, during the UNM era, the U.S. Embassy has not expressed frustration or concern over issues like the events of November 7, torture in prisons, the shooting of young people on the streets, the crackdown on businesses, the crackdown on T.V. stations and peaceful demonstrators, and did not criticize either the judiciary or the Supreme Council of Georgia. 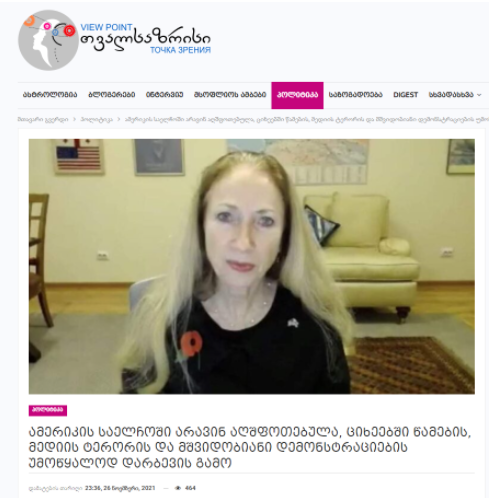 The claim that the U.S. Embassy did not make any critical assessments on human rights abuses during the rule of the United National Movement, including the dispersal of demonstrations, pressure on the media environment and the situation in penitentiaries, is false. The U.S. Embassy participates in preparing the State Department’s annual human rights report, which includes a number of critical assessments of the challenges to democracy in Georgia from 2007 to 2012. In addition, both the U.S. Ambassador and other U.S. government officials have made a number of critical statements during this period.

The allegation that the U.S. Embassy did not respond to human rights violations during the rule of the United National Movement is groundless. The U.S. Embassy participates in the preparation of the annual report of the U.S. Department of State, which relies on critical assessments and reports of local NGOs. Based on the information provided by the embassy, ​​the U.S. State Department and its representatives assess the overall situation in the country. Criticism of human rights, freedom of the media and the judiciary in the country, and freedom of speech and assembly were frequently found in human rights reports prepared by the U.S. Department of State. For example, the table below provides excerpts from reports prepared from 2007 to 2012.

Furthermore, the allegation that the U.S. Embassy did not make any statements about the excessive use of force during the dispersal of the demonstrations during the rule of the United National Movement is not false. This can be confirmed by the statements made by the U.S. Ambassador and other high-ranking U.S. officials after November 7th and May 26th. The same statements show calls for media independence.

For instance, on May 26th, 2011, the ten U.S. Ambassador to Georgia, John Bass, expressed his concern, stating that the Georgian government had to investigate possible cases of excessive use of force by law enforcers.

The same call was made on May 28th by U.S. State Department spokesman Mark Toner.

Mark Toner: We believe that the rights to peacefully express the aspirations of the citizens of Georgia, as in any country, should be respected. And we would call on a government investigation into the incidents of the last several days in which several people were killed.”

On November 8th, 2007, the U.S. State Department issued a statement calling the Georgian government to lift the state of emergency and allow all media outlets to resume broadcasting. On November 10th, Matthew Bryza, the Deputy Assistant Secretary of State for European and Eurasian Affairs, stated he would tell the Georgian government that the state of emergency should be lifted immediately, calling it a big disappointment. During a briefing on November 16, Sean McCormack, the current spokesman for the U.S. Department of State, stressed the importance of holding free and fair elections and ensuring media independence:

Sean McCormack: “Sometimes it may be difficult or uncomfortable for governments to have that independent, robust media, but it’s an essential element of any thriving democracy.”

Noteworthy, the similar claim that the Western partners did not criticize the Georgian judiciary until 2012 was made by the Prime Minister of Georgia, Irakli Garibashvili, in July 2021. In fact, the impartiality of the judges was assessed negatively in the Human Rights Reports produced by the U.S. State Department’s every year. For more information on this topic, read the material prepared by “Myth Detector:”

The article of tvalsazrisi.ge belongs to Irakli Jankarashvili, the author of the Kremlin-linked outlet “News-Front.” Jankarashvili is a supporter of the pro-Kremlin “Alliance of Patriots of Georgia” and often publishes anti-Western and pro-Russian, as well as pro-government and anti-oppositional posts and articles. Jankarashvili also manages a number of Facebook pages and accounts, publishing disinformation and manipulative content. For more information about the pages managed by Irakli Jankarashvili and related platforms, see the material:

Jankarashvili has disseminated similar information in the past as well, arguing that NGOs did not respond to human rights violations until 2012: