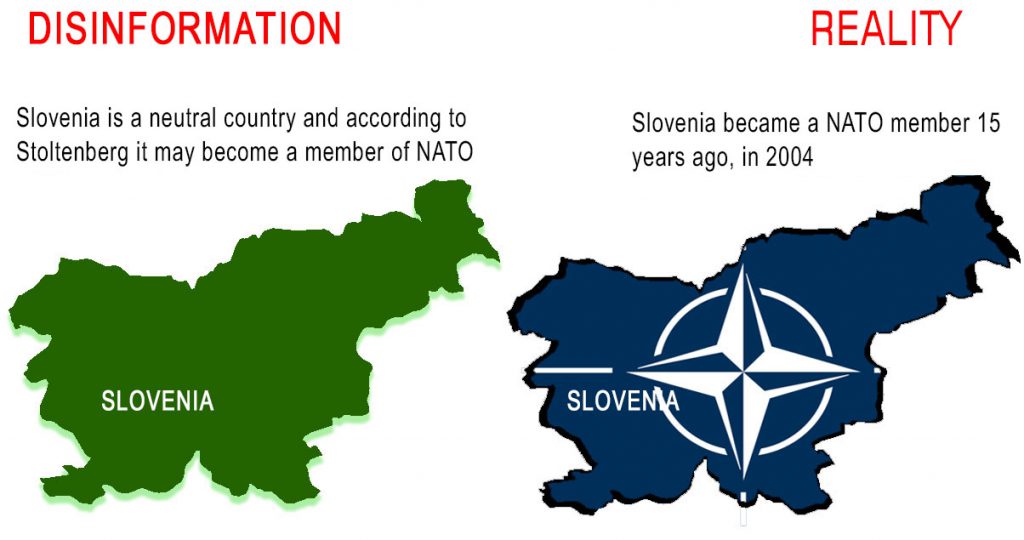 In the interview with Obieqtivi TV on June 11, 2019, Guram Nikolaishvili, a retired Georgian general, said that according to NATO Secretary General Jens Stoltenberg, the status of a neutral country does not rule out NATO membership. Nikolaishvili noted that the NATO Secretary General spoke about Slovenia’s military non-alignment in the interview with one of the Slovenian newspapers.

Guram Nikolaishvili: “In the interview with one of the Slovenian newspapers, Stoltenberg was asked whether it is possible for Slovenia not to join NATO and be a neutral country. We have called it non-alignment and we will outline what we mean in this non-alignment. He answered that it is possible and this does not rule out NATO membership.”

Guram Nikolaishvili’s statement as if Stoltenberg said that the country’s neutrality does not rule out NATO membership is disinformation. The NATO Secretary General did not have such interview with any Slovenian newspaper. Actually, he was interviewed by Serbian online edition Politics, where he spoke about partnership with the alliance rather than membership of neutral countries to NATO. It is worth noting that Slovenia joined NATO in 2004.

Guram Nikolaishvili claims that Jens Stoltenberg was asked whether Slovenia could become a NATO member despite its neutrality.

It is worth noting that Slovenia joined NATO as far back as 2004 and it is not a neutral country. Most recently, Stoltenberg visited Slovenia in October 2018, while the Slovenian President was welcomed by the NATO Secretary General in Brussels on February 20, 2019. Stoltenberg noted that Slovenia “is a highly valued Ally” and hailed the country’s contribution to global security and combating terrorism.

On June 10, 2019, Serbian online edition Politics released an interview with NATO Secretary General Jens Stoltenberg, where he speaks about the foreign policy course of the Balkan countries. He also touched upon a range of issues, among them North Macedonia’s accession to NATO as the 30th member, as well as the Belgrade–Pristina unresolved problem. Stoltenberg said that in response to the existing threats, including Russia’s increasing aggression, NATO is considering the state of alliance and collective defense, adapting it to an unpredictable and fast-changing world. The NATO Secretary General noted that Serbia’s neutral policy is acceptable for the alliance and as the examples of Austria, Sweden and Finland show, neutrality and NATO partnership do not exclude each other. So, Jens Stoltenberg speaks about partnership of neutral countries with the alliance rather than their membership to NATO.

Neutrality means a state in which a country can independently ensure its own defense and hold itself as permanently neutral in all future conflicts, including avoiding entering into military alliances. Non-aligned status is determined by international agreement.

Maintenance of the neutrality is associated with huge economic resources. Thus, a country needs sustainable economy. According to the World Bank data for 2017, GDP per capita in Sweden, Austria and Finland – the neutral countries mentioned by Stoltenberg – constituted USD 56 thousand, USD 49 thousand and USD 47 thousand, respectively. The same indicator for Georgia amounts to USD 4 thousand.

Sweden, Austria and Finland are members of the European Union that provides additional guarantees for their economic stability. Neighboring countries represent an important factor for military non-alignment, because stable relations with the bordering countries represent a guarantee for non-alignment. Among the above listed countries, only Finland is bordering with Russia, yet has no military conflict with it.