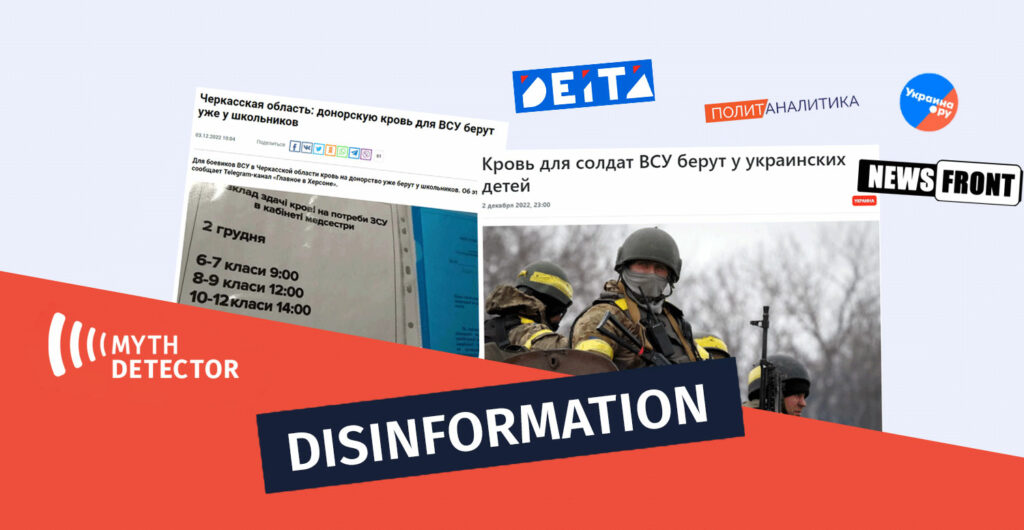 On December 2-4th, 2022, the Russian propaganda media – news-front, politanalitika.ru, КРИМИНАЛИТЕТ, Dieta.ru reported that blood donation points were opened in schools of the Cherkasy Oblast of Ukraine, and donors will be not only teachers but students of grades 6-12. The same information was published by Украина.ру without specifying the location. The articles are accompanied by a photo, which mentions that blood donation is aimed at helping the armed forces of Ukraine. The photo encourages parents to bring a bottle of water and chocolate along with the birth certificate or passport of their children.

The disseminated claim that schoolchildren in Ukraine are engaged in donating blood for the Ukrainian army is disinformation. According to the country’s legislation, blood donation is allowed from the age of 18. In addition, a pilot program of 12-year schooling was introduced in Ukraine in 2017, so the first 12th graders will only be in schools in 2029. This raises the suspicion that the posted announcement regarding blood donation is fake. In addition, Myth Detector contacted the Ministry of Health of Ukraine, which confirmed that the disseminated information is false.

Russian sources do not indicate the schools of Cherkasy Oblast where the blood donation points were opened, while according to Ukrainian legislation, blood donation is voluntary and is possible from the age of 18. In addition, the donor must weigh at least 50 kilograms. Myth Detector contacted the Ministry of Health of Ukraine to verify the disseminated information. The Ministry confirmed that blood donation has been taking place in Ukraine involving people 18 years old and above, and the purpose of spreading such disinformation is to discredit the government, people and the army of Ukraine. Also, according to the Ministry, there is no shortage of blood in Ukraine, which is proven by the fact that they have not turned to foreign partner countries for help.

In addition, the information spread by the Russian media mentioned that blood transfusion donors are students of 6-12th grade. It should be noted that the 12-year school system was introduced in Ukraine in 2017, and according to the reform, the first cohort will complete the 12th grade only in 2029. Therefore, at this stage, Ukraine does not have 12th-grade students. The mentioned error in the application creates a reasonable suspicion that the claim about blood donations is fabricated.