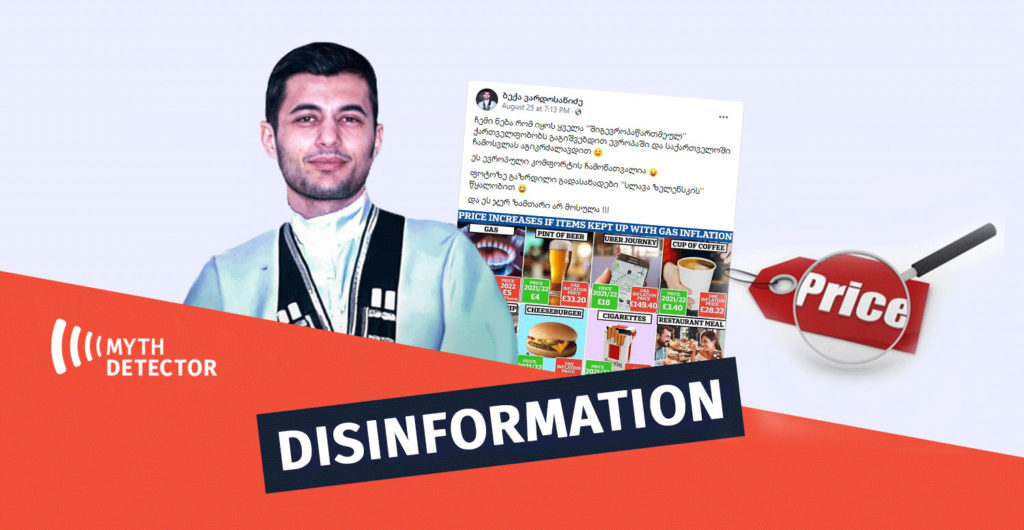 On September 1st, in a livestream published on his Facebook page, Georgian blogger Beka Vardosanidze talked about increased prices for gas, electricity and food in Europe. Based on the Daily Mail, Vardosanidze showed a photo collage indicating the prices of various products in the UK. According to him, “due to gas inflation,” prices in Great Britain have increased significantly; for example, a pint of beer used to cost 4 GBP, but now it has increased to 33.2 GBP; the price for a single taxi ride has increased from 18 GBP to 149.4 GBP, and the price of a cup of coffee now amounts to 28.22 GBP. 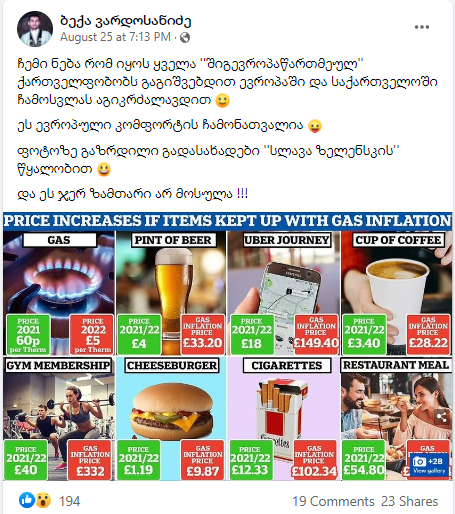 The claim that the product prices in Great Britain have increased by eight times is disinformation. In fact, the prices shown in the photo collage are proportional to the increased gas price and show us what these products would cost if their prices were to increase at the same rate as gas prices. For instance, a pint of beer costs an average of GBP 3.95, not GBP 33.20.

The British publication Daily Mail did indeed publish the photo collage mentioned by Vardosanidze, although it does not reflect the increased prices for products and services. According to the article, Greg Jackson, chief executive of Octopus Energy, said that if the price of beer rose at the same rate as the price of gas, a pint of beer would cost GBP 25. The prices of other products and services given on the photo collage are also calculated according to this logic. 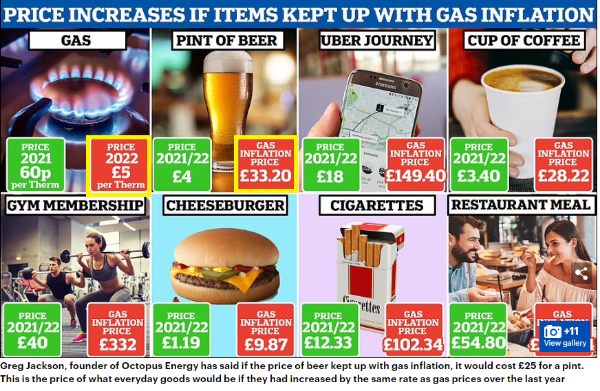 The prices of the products listed in the photo collage have indeed gone up, although they are much lower than the prices presented in the “Gas Inflation Price”. For example, according to data from consultancy firm CGA, the average price of a pint of beer has risen from £2.3 in 2008 to £3.95 in 2022, although prices vary widely by location, with the highest price for a single pint in a London pub being £8.06.

The photo collage also shows the change in taxi fares. Notably, Bloomberg writes that Uber Technologies Inc.’s decision will increase the price of taxis in Great Britain by various indicators, for example, in London by 5%, in order to attract more drivers. According to the company, they need 8,000 drivers to meet the demands of London.

According to the Guardian, after taxes on farmers increased due to the Russia-Ukraine war, food prices rose by 5.1% in August, and food price inflation reached its highest level since 2008.

However, it should also be noted that prices in the UK have been increasing gradually since August 2021, with prices going up each subsequent month compared to the previous one. 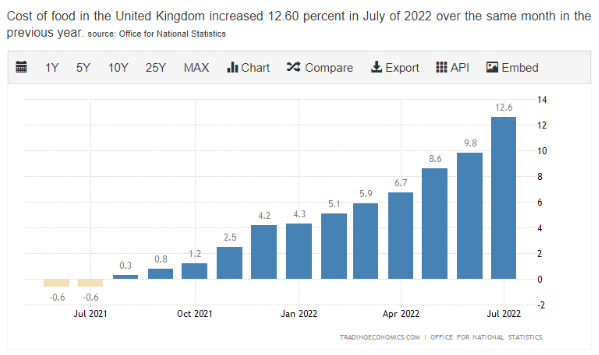