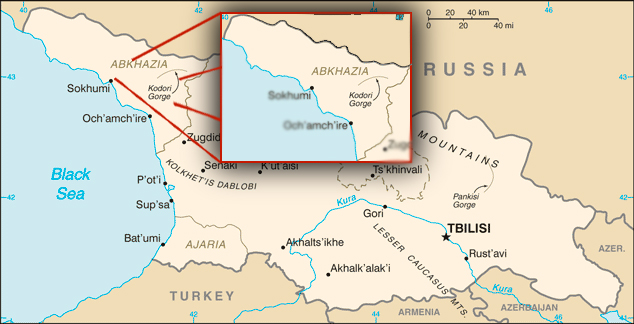 Russian media outlets respond to each round of the Geneva International Discussion with criticism and manipulative assessments of this format. The 47th round of the Geneva International Discussions was held in early April 2019 that was followed by assessments of Abkhaz de facto authorities in the Russian-language media. For example, on April 12, 2019, Netgazeti reposted an interview of Temur Nadaraia, head of the Gali district of occupied Abkhazia, with Abkhaz online edition НУЖНАЯ ГАЗЕТА, in which he unveils his position about participation in the Geneva discussions. Nadaraia claims that during the discussions, its participants focus mainly on human rights violations in Abkhazia, while similar violations are also taking place in the West.

Temur Nadaraia, de facto head of the Gali district: “We should not stay in the position of defending or excusing ourselves; we should take the offensive and it should be done in a reasonable and diplomatic manner. We constantly have to answer the questions about human rights violations. Be sure that hundreds of similar violations we are accused of are taking place in the West on a daily basis. But, they, naturally, do not want to see them and instead notice only our violations.”

Temur Nadaraia’s statement as if human rights are violated in Abkhazia in the same way as in the West is disinformation. Over the past decades, world-renowned researchers or institutions have released a lot of critical assessments about the situation, including gross violation of human rights in Abkhazia. The overall situation shows a tendency of violating human rights of ethnic Georgian population of Abkhazia.
Based on the researches and reports, we offer the list of the rights, which are violated in Abkhazia most frequently:

1. The right to free movement

FIDH: “The people face major problems when travelling across the Administrative Boundary Line. Official crossing points are entirely controlled by Russian border guards who create serious problems when Georgian residents – who do not hold Abkhaz or Russian passports – try to cross the ABL, be it to visit relatives, graves or schools, seek medical help on the other side or just harvest  bladdernuts from the forest.”

The 2016 Human Rights Report of the U.S. Department of State reads:

The issue of restrictions on free movement is also highlighted in the 19th consolidated report of the Secretary General of the Council of Europe on the conflict in Georgia.

“The main critical development relating to freedom of movement concerned, however, the temporary closure for over one month of the ABL, pursuant to a decision of the de facto authorities, arguably in response to a perceived public health risk from reported cases of the H1N1 (swine flu) virus in Georgia,” reads the report.

The report also focuses on the new rules of crossing the ABL. According to the new rules, the old – declared invalid – de facto Abkhaz passports can no longer be used for crossing. Conversely the validity of the so called Form Nr. 9 has been prolonged until the end of 2019 provided that its holders apply for the de facto “foreign residence permit”. According to the report, ethnic Georgians in Abkhazia thus appear to face the difficult choice between declaring themselves foreigners in their ancestral land and accepting a limited level of rights attached to the foreign residency on the one hand, and the prolongation of the status limbo on the other.

2. Access to education, including teaching of/in the native language

The problem of access to education, including teaching of/in the native language is highlighted in the report released by the Olof Palme International Center. The report on the human rights situation in Abkhazia, a disputed territory in the former Soviet Union, is based on thorough research and several field visits by Thomas Hammarberg, former Council of Europe Commissioner for Human Rights and earlier Secretary General of the Palme Center and Magdalena Grono, an expert on South Caucasus, now working with the International Crisis Group.

“Georgian language schools in the Gali and Tkvarcheli districts were formally shifted into Russian language instruction in 1994. Georgian was taught as a foreign language or an elective subject,” reads the report.

The problem of access to education, including teaching of/in the native language is also highlighted in the recent consolidated report of the CoE Secretary General. According to the report, in Lower Gali, schoolchildren in grades 1-7 are taught fully in Russian with limited access to classes in the Georgian language and literature. According to the Georgian authorities, instruction in Upper Gali continued to be offered fully in Russian with Georgian being taught as a foreign language in eight out of nine schools, whereas schoolchildren in Tkvarcheli and Ochamchira reportedly have no access to education in their native tongue.

3. The right to vote

According to the 2018 report of Freedom House, the ethnic Georgian population of Abkhazia is not permitted to vote, especially as the majority of Gali residents are ethnic Georgians.

Freedom House: “The ethnic Georgian population is routinely excluded from elections and political representation; in 2017, authorities argued that the majority of Gali’s residents were Georgian citizens and therefore not permitted to vote.”

The U.S. State Department’s human rights reports of 2017 and 2018 also highlight violation of this right. The 2018 report reads: “De facto authorities in Abkhazia stripped ethnic Georgians of their Abkhaz “citizenship” in 2014, preventing them from participating in elections.”

On April 24, the Secretary General of the Council of Europe Thorbjorn Jagland presented his 19th consolidated report on the conflict in Georgia, which takes stock of the security and human rights situation in Georgia’s occupied regions. According to the report, international monitoring missions had restricted access to both Abkhazia and South Ossetia to assess the human rights situation on the ground.