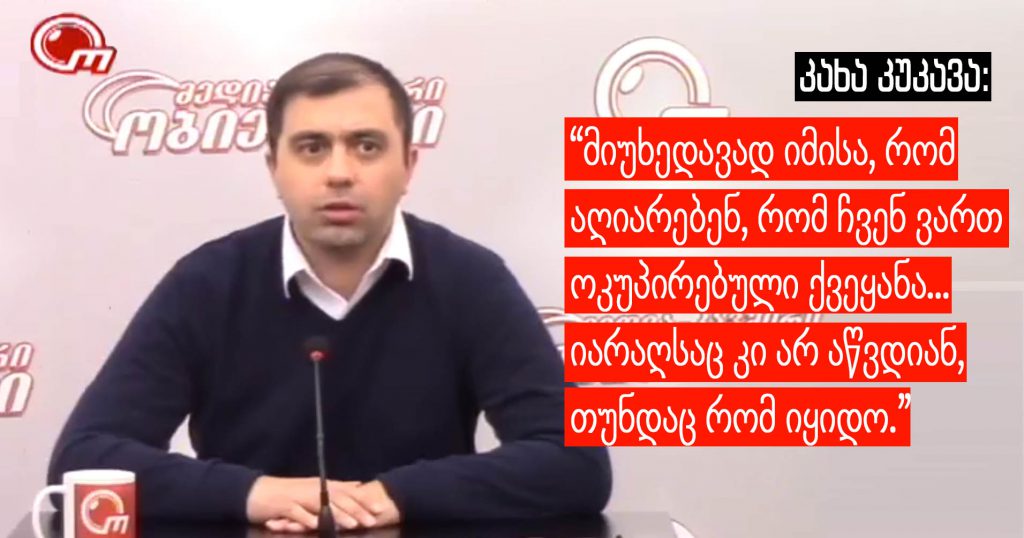 On August 30, on air at TV Obiektivi, the leader of Free Georgia Kakha Kukava stated that the support of the Western countries towards Georgia is only expressed in recognizing the occupation of the country and that Georgia should not have more expectations of them, as the West still does not grant Georgia right to purchase lethal weapons.

Kakha Kukava, Free Georgia: “The Western support in certain issues is key, for example in the non-recognition policy… However, they (the West) point out themselves that we should not have any more expectations… It is not allowed to supply Georgia with lethal weapons… Although they recognize that we are an occupied country and that we need weapons to defend ourselves from the occupants, they still do not supply Georgia with weapons – they even do not sell them, not to mention giving them for free.”

Kakha Kukava’s statement that the West does not supply Georgia with lethal weapons, is not true, as in January 2018 Georgia received Javelin antitank missile system and in August of the same year, Donald Trump signed the Defense Authorization Act that envisages supplying Georgia with lethal military weapons. The given message aims to popularize the opinion that the West and our strategic partners cannot defend Georgia.

Javelin antitank system has been a part of the US armament since 1996 and is owned by 20 countries including Georgia. US Army and US Navy used Javelins in 2003 Iraq War and in Afghanistan, in the fight against Taliban.

Deputy Assistant Secretary at the US Department of State, Bridget Brink spoke about the importance of Javelin antitank system for the defense capability of Georgia: “This proposal of arms sale is in the framework of the existing military cooperation between Georgia and the United States that aims to build defense capabilities of Georgia and help a strong military ally of the United States. Georgia is a sovereign, independent country that has every right to choose its own future, including defense sphere orientation and sources of military capabilities.”

In the 2019 fiscal year, according to the Defense Authorization Act, a security strategy has been formulated which implies providing aid to strategic partners – Lithuania, Latvia, Estonia, Poland, Romania, Bulgaria, Ukraine, Moldova, and Georgia – with the aim of containment of the Russian aggression. The document envisages strengthening the security and defense of Georgia and supplying Georgia with lethal military weapons.

Between 2014 and August 2018, the United States issued USD 18 million worth of authorization in the framework of the process of Direct Commercial Sales (DCS) of defense equipment to Georgia. It includes firearms, military materials, and other military equipment.

In 2017, in the Georgian armament, the Soviet-manufactured PKM machinegun was replaced by an American analogue – M-240, which corresponds to NATO standards. M-240 is actively used in US infantry, military land transport, boats, and helicopters.

In May 2018, Defense Minister Levan Izoria stated at a unified meeting of parliamentary committees that after Javelin antitank systems, Georgia will receive the newest air-defense system – Stinger, which is a part of armament of up to 30 countries. Portable anti-aircraft missile system in the Georgian Army during the War in Abkhazia was Strela-2M, while in the 2008 August War, the Georgian Army had Igla (Soviet/Russian) and Grom-2 (Polish).