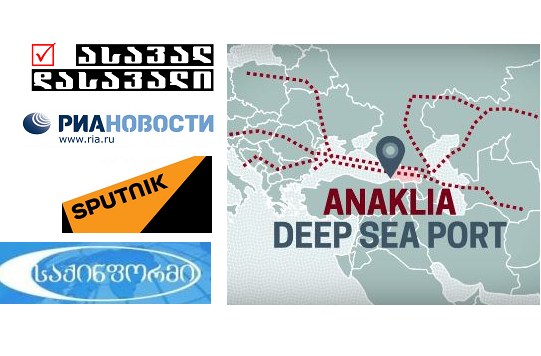 On November 21-27, newspaper Asaval-Dasavali published an interview with oceanographer Nodar Tsivtsivadze, where he expresses his suspicions as if instead of deep Sea port, American naval base is being constructed in Anaklia. At different times, analogous information was spread by Russian Government owned media outlets Ria Novosti and Sputnik, as well as Georgian news agency “Sakinformi” which openly declares its pro-Russian editorial policy. Sakinformi’s editorial statements were connected at first to the construction of Lazika city and later to Anaklia Deep Sea Port. Sakinform’s statement was linked to NATO Warsaw summit, in particular to the cooperation ensuring Black Sea Region security. Myth Detector contacted Anaklia Development Consortium (ADC). Material below about Anaklia Deep Sea Port was prepared according to the information provided by ADC. The article also contains the overview of NATO Warsaw Summit Communique in relation to Georgia, which reveals that information as if military-naval base is being constructed in Anaklia- is baseless.

One of the primary goals of Anaklia Deep Sea Port project is to create industrial port empowered with modern infrastructure. Its depth and technical support will enable to hold even the biggest of Panamax and New Panamax ships, with 10 000 containers. No other ports in Georgia can serve such kind of ships nowadays. The construction is planned in several stages and contains 9 phases. Finally, capacity of the Anaklia Deep Sea Port will reach 100 million tons per year.

In addition to the construction of Deep Sea Port, development of Free Industrial Zone (FIZ) is also planned behind the port. FIZ will further expand infrastructure around the port and create additional workplaces for local population of Anaklia and Samegrelo-Zemo Svaneti.

Georgia will invest in the project 100 mln which will be allocated to crate road and railway infrastructure. In terms of enhancing Georgia’s transit function, Anaklia Deep Sea port is of great importance as it will facilitate trade between Asia and Europe. It will also enhance Georgia’s transport, financial, industrial and tourism potential (See detailed information at the official web-portal of ADC).

NATO Warsaw Summit (July 8-9, 2016) Communiqué reviewed cooperation to respond security challenges in Black Sea region. According to the Communique, NATO will continue to support regional efforts by the Black Sea littoral states aimed at ensuring security and stability as well as strengthen its dialogue and cooperation with Georgia and Ukraine in this regard.

111th, 112th and 113th articles of Communique address Georgia. According to 111th article, Georgia’s relationship with the Alliance contains all the practical tools to prepare for eventual membership. NATO highly appreciates Georgia’s significant and continuous contributions to the NATO Response Force and the Resolute Support mission in Afghanistan.

According to 112th article, NATO will continue to provide the resources needed to implement the Substantial Package, which aims to strengthen Georgia’s capabilities and, thereby, helps Georgia advance in its preparations for membership in the Alliance. NATO will provide support to the development of Georgia’s air defence and air surveillance and also deepen its focus on security in the Black Sea region.

113th article notes that, NATO calls on Russia to reverse its recognition of the South Ossetia and Abkhazia regions of Georgia as independent states, to stop its construction of border-like obstacles along the administrative boundary lines, and to withdraw its forces from Georgia. Alliance does not recognize the so-called treaties signed between the Abkhazia region and South Ossetia region with Russia. According to the Communique, these violate Georgia’s sovereignty and territorial integrity and blatantly contradict the principles of international law, OSCE principles and Russia’s international commitments.