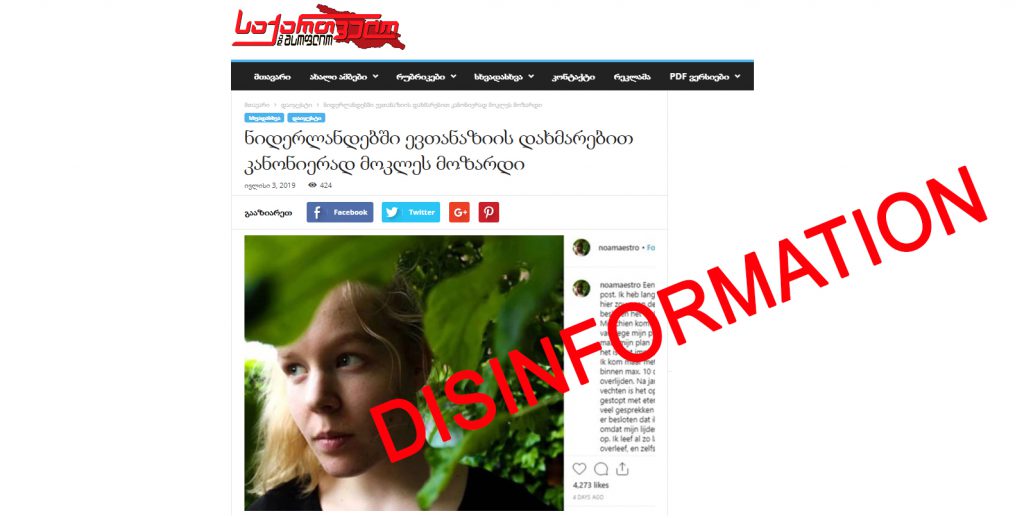 On July 3, 2019, an online edition Georgia and the World published an article on its webpage titled “In the Netherlands, a Minor was Legally Killed through Euthanasia”. The article is based on information by DailyMail, according to which, a 17-year-old Dutch, Noa Pothoven, who suffered from severe depression after a rape, decided to euthanize herself. The article also mentions that the Netherlands allows such a procedure from the age of 12 and does not require a consent from parents even if it is done by minors.

The DailyMail-based facts provided by the Georgia and the World in the article about the reasons of the death of the 17-year-old and the procedures of euthanasia in the Netherlands are disinformation. The reason of Noa Pothoven’s death was the fact that she stopped eating and drinking after the clinic rejected her request for euthanasia. The Netherlands allows euthanasia only from the age of 12 and with a consent from parents.

Fact 1: The Dutch girl died because she stopped eating and drinking

Noa Pothoven was a victim of sexual abuse on several occasions and subsequently suffered from post-traumatic stress disorder, depression, and anorexia. When she was 16, Noa addressed a clinic with a request to euthanize her, however, she got rejected, as she had not agreed upon the issue with her parents. After the girl stopped eating and drinking, she was found dead in her house on June 2.

Initially, due to lack of information, several questions arose and inaccurate information was disseminated related to Noa’s death. Several international media outlets, such as Euronews, DailyMail, the Independent, and Dailybeast inaccurately covered the death of the 17-year-old teenager by writing that Noa Pothoven ended her life through euthanasia. The given information was verified by a Politico journalist Naomi O’Leary. On June 5, The Royal Dutch Medical Association (RDMA), the Minister of Healthcare of the Nethelands, and the members of the girl’s family confirmed that the legal euthanasia did not take place.

Fact 2: In the Netherlands, euthanizing minors is only allowed through the consent of parents

In the Netherlands, any person older than 12 can address a clinic with a request for euthanasia, however, minors need a consent from their parents. Between the age of 16 and 18, the consent is not required, however, the members of the family should be informed. In 2018, there were 2,600 requests for euthanasia, from which 727 were accepted. The biggest share of patients are people with mental disorders, some of them with severe untreatable depression. In addition, there are several requirements that the patients have to meet in order to get the permit for euthanasia. Mr. Pleiter, the Director of the End-of-Life clinic, stated in the interview with New York Times that permit on euthanasia is only issued as a measure of last resort.