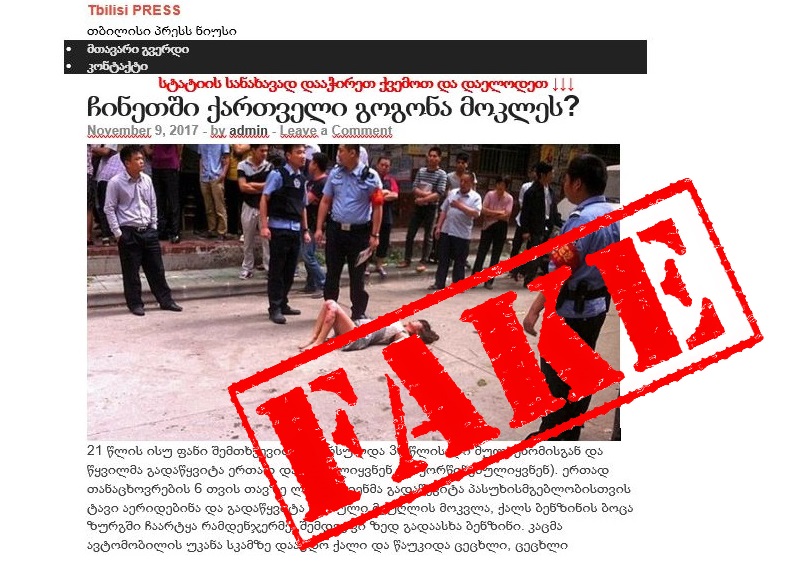 An online edition mega-news.us and tbilisipress.compublished information with identical content and title – “Georgian Girl Killed in China?” – on November 6 and November 9, respectively. Materials of the both editions come with an identical photo that, according to the authors, shows the victim, the Georgian girl. The photo attached to the article shows an attempted murder of a Chinese, not Georgian, girl by her partner in 2014.

1. The photo shows a citizen of China

As the double-check of the photo in the search engines revealed, the photo shows a Chinese citizen, whose partner tried to kill her due to an unintended pregnancy. According to Central European News (CEN), this information has been shared with identical photo by such editions as Mirror, Dailymail, Huffington. The information about the attempted murder of the pregnant woman by her partner was covered by the foreign media on April 27, 2014. Georgian websites disseminated the story with a three-years delay, on November 9, 2017, with an irrelevant title that said that the photo showed the Georgian girl murdered in China.

3. None of the foreign media outlets mention the Georgian girl

The search systems of the primary source of the information – Central European News – which operates with various web-pages in Europe, were unable to find the given information. CEN often writes about strange stories from various countries, which cannot be verified with the primary source. It is noteworthy that Buzzfeed has accused CEN of covering hyperbolized and unverified events and noted that the unverified information spread virally in the Western media exactly via CEN. Georgian sources of the manipulation

The news with the manipulative title were published by the Georgian webpages  tbilisipress.com and  mega-news.us. As soon as one visits these websites, one sees ads and it is impossible to get access to the information without clicking the ads. The given portals belong to such webpages whose income depends on the number of views of the published information, qualifying them as clickbait sites. Funds earned through the number of clicks is the main source of income for this type of online media. To this end, with the aim of increasing the outreach, they publish scary, populistic or disappointing information with hyperbolic headlines that emotionally affect the audience.