Disinformation About the Vaccination of Bill Gates’ Children, Depopulation, and Chubais 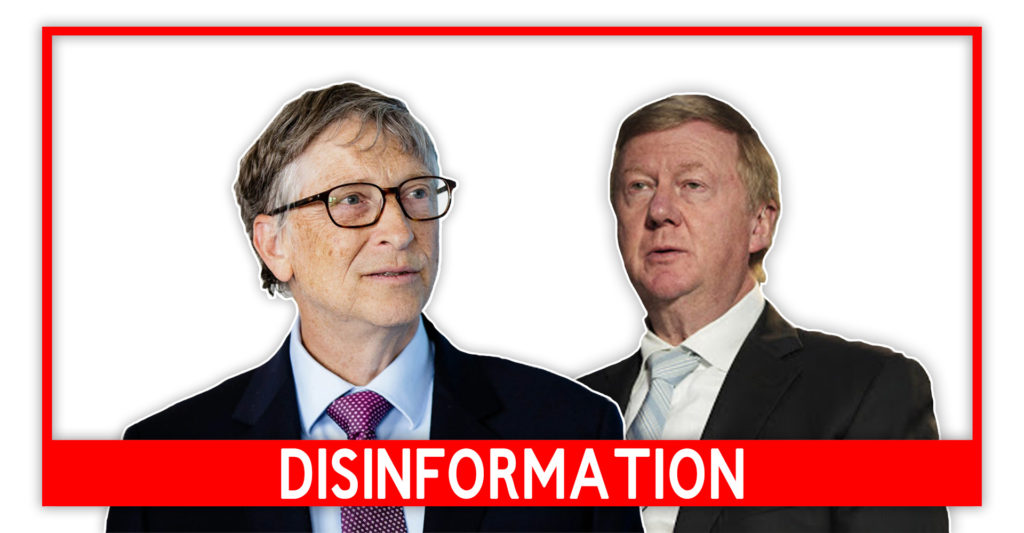 On September 6, 2020, a Facebook user Nina Marji published a Russian video-collage on her personal Facebook page titled “Complete truth about the vaccines”. The video includes fragments from interviews and statements by Bill Gates, a Russian politician Anatoly Chubais, and a British conspiracy theorist David Icke from different years. The video expresses an opinion, popular among anti-vaccination activists, that the vaccines are harmful for people and that influential, elite groups are using them with evil intentions. The video about vaccines contains several claims: 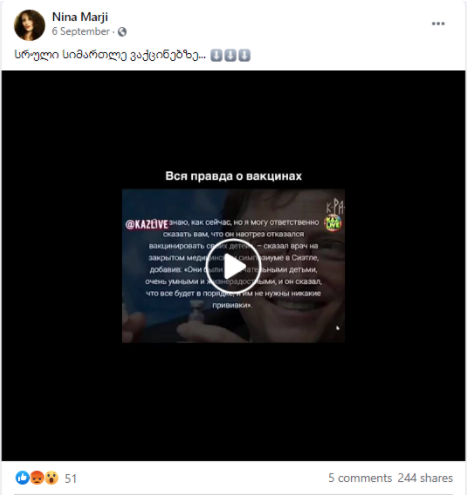 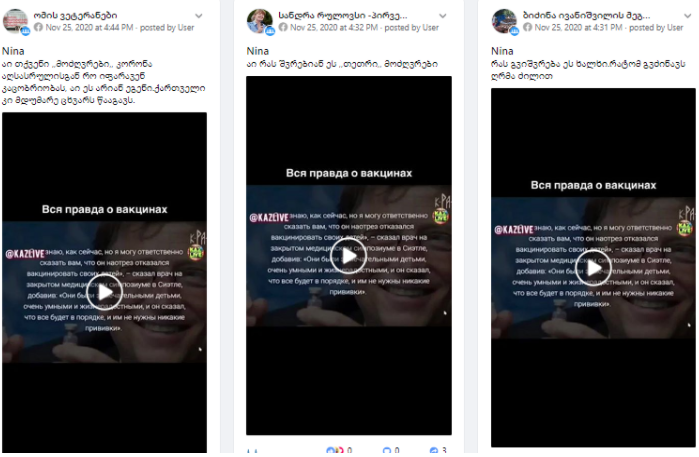 The claim that Bill Gates refuses to vaccinate his own children is a disinformation, as all three of Gates’ children have been vaccinated. The other claims that Bill Gates and global elites plan to depopulate the planet through vaccinations and that the vaccine against the coronavirus already exists, but is being hidden from people with the aim of fearmongering the latter, are conspiracies as well.

The video claims that despite the active support to the vaccines, Bill Gates refused to vaccinate his children, which means that the vaccines are harmful and that Gates actually has evil intentions. The given disinformation was also being disseminated via English online social networks in 2018 and 2019. After the start of the pandemic, it became active once again. The disinformative posts ascribed that statement to the former doctor of Bill Gates’ family. Bill and Melinda Gates rebutted the given disinformation in 2019:

Melinda Gates: “All three of my children are fully vaccinated. Vaccines work. And when fewer people decide to get them, we all become more vulnerable to disease. As World Immunization Week approaches, let’s listen to science, have honest conversations with each other, and act to protect our children.” 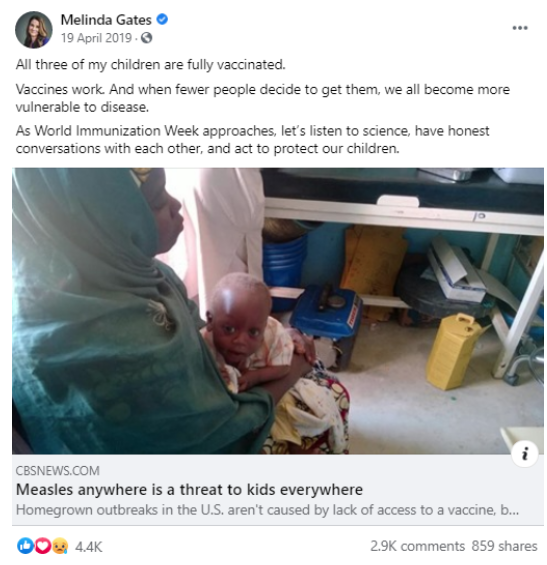 The beginning of the video includes a fragment from an interview given by Bill Gates to CNN in 2011:

Bill Gates: “Over this decade, we believe, unbelievable progress can be made [with] both inventing vaccines and making sure they get out to all the children who need them. We could cut the number of children who die every year from about 9 million to half of that. We have success on it. The benefits would include reducing sickness, reducing the population growth – it really allows the society a chance to take care of itself…”

The video emphasizes Gates’ words – “reducing the population growth” – and alleges that these words confirm the hidden goal of depopulation. However, the context of these words was different. Bill Gates referred not to an induced death of the population with vaccines or other medicaments, but to slowing the population growth rate. He believes that once the vaccines reduce child mortality and more children survive, children will decide to have as many children as they can sustain and give education to – something that would be a pre-requisite for defeating poverty and increasing the life quality.

Similar conspiracy-related context was applied to a speech by a Russian politician Anatoly Chubais at Rusnanotech 2011, a Russian technological forum. The video of Chubais’ speech has been disseminated on Russian social media as an evidence of Chubais’ plan to reduce the world population, but he actually talked about pessimistic predictions made in scientific circles in the 1970s that in the 21st century the Earth would allegedly exhaust its physical limits of sustaining the population and the population would start to significantly decrease at the end of the century. Chubais also added that even now, there are scientists that believe that reducing the planet’s population from 7 billion to 2 or 1.5 billion is the only development scenario. However, the given speech does not mention either vaccines or viruses.

Statements and predictions related to reducing the population growth rate have often become reasons for interpretations and conspiracies. Read more about the given conspiracy in the following materials by the Myth Detector:

A fragment from a British conspiracy theorist, David Icke’s speech is also included in the video. In this fragment, Icke claims that the vaccine against the coronavirus already exists, but it is being hidden for the time being, so that people start to panic and demand vaccination by themselves. According to Icke, the vaccine will be found later and it would cause another disease, which would result in a re-introduction of quarantine measures.

An astrologist Mikheil Tsagareli has also disseminated a similar conspiracy about vaccines being allegedly used for depopulation. Tsagareli’s video has been shared by a Facebook page “Секрет гриффита Griffith’s secret გრიფით საიდუმლო” and a Facebook user „ლაშა ვერულაშვილი“ (Lasha Verulashvili).

Mikheil Tsagareli: “One of the widely known plans of masonic groups is to reduce the world population to one billion. In order for one billion to remain, 7 billion should perish. This will happen slowly, by age groups… Those who will stay, will have microchips, so that they can build a new world… Moreover, Bill Gates’ wish about mandatory vaccination has got to be in connection with this game that is being played by these billionaires and other billions backing them…”

As of November 30, the video shared by Verulashvili had 273,000 views and 11,000 shares. The video by “Секрет гриффита Griffith’s secret გრიფით საიდუმლო” had 103,000 views and has been shared in 17 public groups since May.