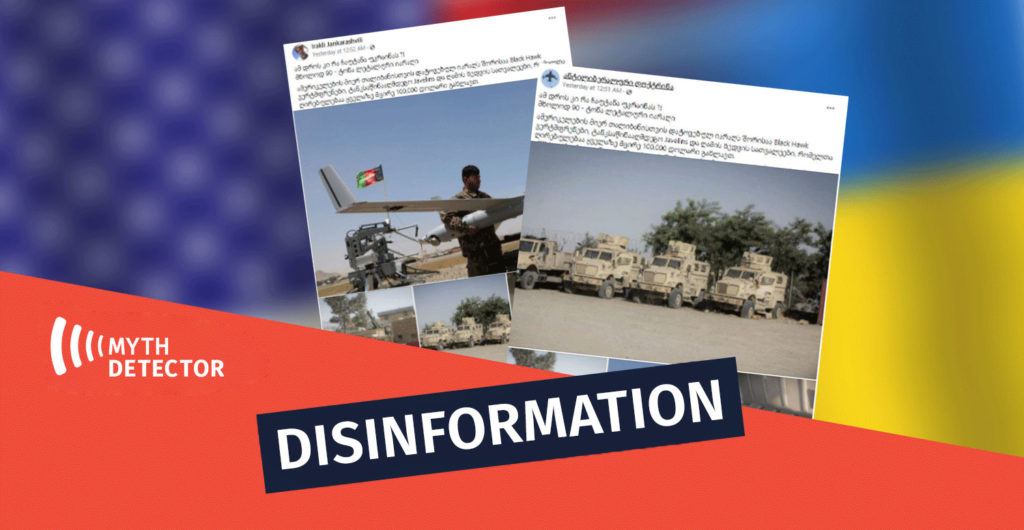 On January 24th, Irakli Jankarashvili, the author of the online outlet “Tvalsazrisi”, published a post on his Facebook page stating that the U.S. had delivered only 90 tons of lethal weapons to Ukraine, and then listed the weapons and equipment that the Americans had left for the Taliban. On the same day, the post was published unchanged by the Facebook page “Anti-liberal Doctrine,” also managed by Jankarashvili. 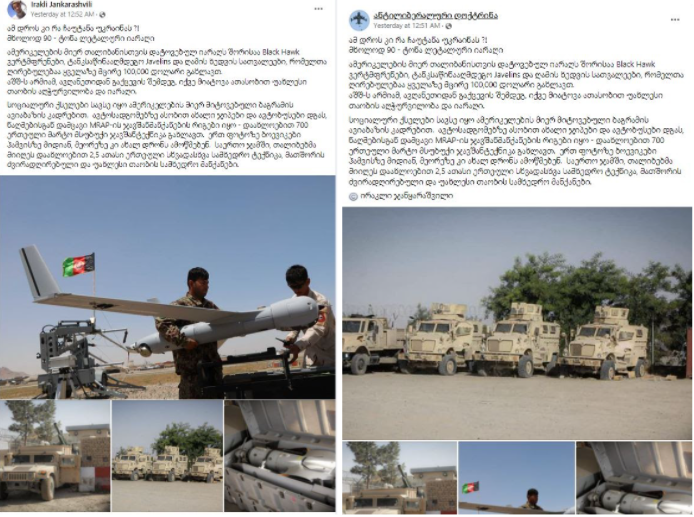 The claim that the U.S. delivered only 90 tons of lethal weapons to Ukraine is false. In fact, 90 tons of weaponry represents only the first portion of military aid sent from the U.S. to Ukraine. At this stage, three portions of similar assistance have already arrived from the U.S. to Ukraine. In addition, the comparison between U.S. aid to Ukraine and the military equipment left in Afghanistan is manipulative, given that U.S. and other NATO allies’ military assistance to Ukraine in recent years has amounted to several billion U.S. dollars, while the cost and usefulness of U.S. weapons left in Afghanistan are questionable.

The amount of U.S. Military Support to Ukraine

The 90 tons of lethal weapons mentioned in Irakli Jankarashvili’s post is, in fact, only a fraction of the U.S. aid to Ukraine. Ukraine has already received three portions of such assistance. Information about the reception of U.S. aid is systematically published on the official website of the U.S. Embassy in Ukraine. The third portion of the aid, amounting to 79 tons, including about 300 Javelins, arrived in Ukraine on January 25th. U.S. President Joe Biden approved a USD 200 million package in December last year to support Ukraine’s security. In addition, last year alone, Washington allocated USD 650 million in arms assistance to Ukraine, the largest amount allocated for this purpose since the 2014 conflict. In addition, the Pentagon will supply USD 60 million worth of lethal and non-lethal weapons to Ukraine from its own stock. 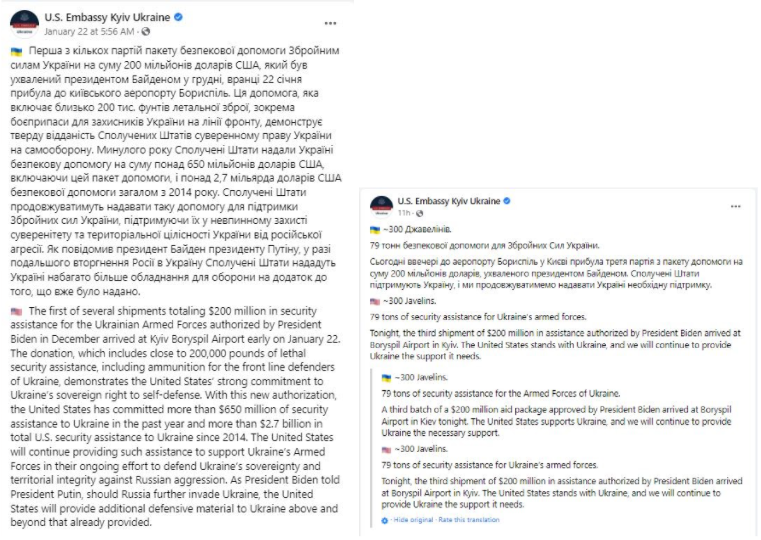 Following Russia’s annexation of Ukraine in 2014, the United States has provided more than EUR 2.5 billion in the form of security assistance to Ukraine and implemented training programs.

What military assistance does other NATO member states provide to Ukraine?

Notably, over the years, in addition to the United States, other NATO member states have provided Ukraine with significant military assistance. For example, in 2015, the U.K. launched operation Orbital, which was part of a training program for the Ukrainian Armed Forces. In 2020, a maritime exercise program of the Ukrainian navy was implemented. In January 2022, the United Kingdom supplied weapons to Ukraine, including anti-tank weapons, and sent a small contingent for training. In addition to lethal weapons, the U.K. also provided Ukraine with 2.2 million worth of non-lethal military equipment.

In addition to the United Kingdom, Estonia, Latvia, and Lithuania have promised to supply arms to Ukraine. They have already received permission from the United States to deliver anti-tank and anti-aircraft missiles to Ukraine.

What Equipment did the U.S. Leave in Afghanistan?

As for comparing military aid to Ukraine with weapons left behind by U.S. troops after leaving Afghanistan, this is part of a manipulative narrative that pro-Kremlin actors have been actively spreading since the U.S. withdrawal from Afghanistan. According to these messages, the U.S. left about USD 85 billion worth of military equipment to the Taliban.

First and foremost, it should be underscored that the United States did not “leave” weapons to the Taliban, it was handed over to the Afghan army and found in the hands of the Taliban after taking control of most of Afghanistan.

The claim that the Taliban has acquired military equipment worth 85 billion USD is exaggerated since the named value, about 82.9 billion USD, is actually the total amount spent on the Afghan Security Forces Fund since the start of the war in 2001, and only part of it (about 18 billion USD) was spent on weaponry, some of which were damaged or destroyed. A Pentagon spokesperson said the process of destroying the weapons had been going on for several years.

Representatives of the U.S. military forces have also underscored that the equipment that ended up in the hands of the Taliban is not up to date and does not contain sensitive technology, which would pose a particular threat to the U.S. military in a possible future confrontation. Military experts argue about how effectively the Taliban will be able to use captured military equipment. Even in the case of acquiring the necessary personnel to master the equipment, the maintenance and repair without the special equipment and parts previously supplied to the Afghan army by the U.S. would be impossible.

Before leaving Hamid Karzai Airport, the U.S. military destroyed about 70 anti-aircraft mines, 23 armoured vehicles and 73 aircraft. Some of the equipment was flown by Afghan servicemen to neighbouring countries, including 22 military planes and 24 helicopters to Uzbekistan.

For more information on the topic, see our article: