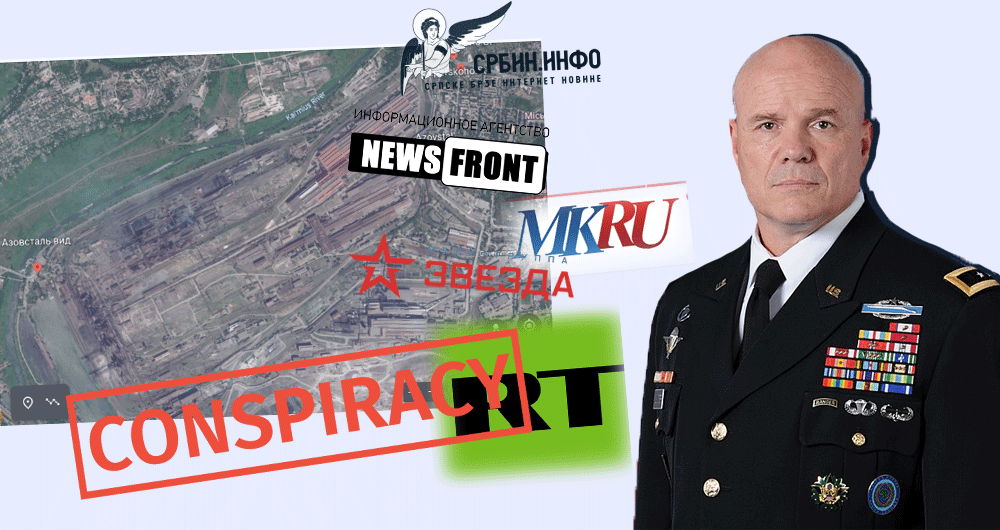 April 10-11, the website of the Ministry of Defense of Russia-owned TV Zvezda, in addition to a number of online media outlets (1,2,3,4,5), have published the information that 30 meters deep below the industrial zone of “Azovstal” in the Ukrainian city of Mariupol exists a secret NATO biological laboratory under the name PIT-404. According to the articles, PIT-404 was built and operated by Metabiota, a company linked to Joe Biden’s son, Hunter Biden.

The outlets also underscored that up to 240 foreigners are present at the “Azovstal” secret lab, including officers of NATO and the French Foreign Legion.

The topic was also covered by the Kremlin propaganda channel Russia Today, in which the editor of the “Caucasian Center for Islamic Studies,” Shota Apkhaidze, appeared as a guest. The program featured the telegram post of the former Prime Minister of Ukraine, Mykola Azarov, which refers to the existence of the secret NATO bio-lab under “Azovstal.” Posts on this topic were also published on Azarov’s Facebook page and his personal profile.

“Azovstal” was also linked to the name of the American general Roger L. Cloutier Jr., information about which was published on the YouTube channel TMZ News. The video spreads information about the capture of the general, who was allegedly found in the catacombs of “Azovstal”.

Identical information was published by individual Russian (1, 2) and Georgian Facebook accounts as well. 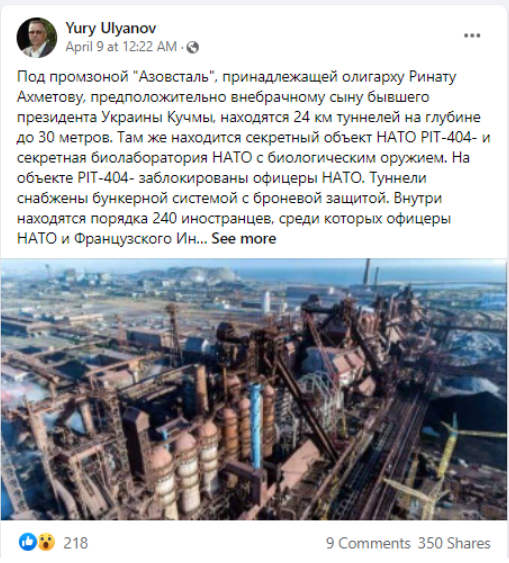 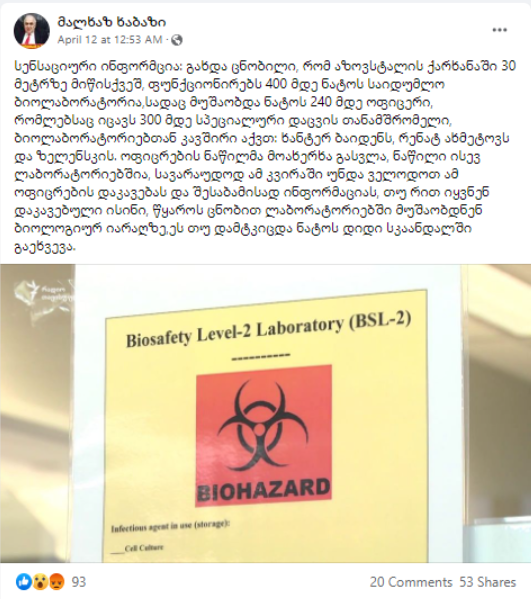 The claim that NATO’s secret facility PIT-404 and a bio laboratory are located under Azovstal and that  NATO officers are present on the ground is a conspiracy theory and is not based on factual evidence. The source of the conspiracy is a comment posted on a Russian-language forum, which is not accompanied by factual evidence. Azovstal is a metallurgical plant, and the company Metabiota does not finance the development of biological weapons in Ukraine. The claim that the American general Cloutier was in Azovstal and became hostage to the Russian army is also disinformation.

Information about the existence of a NATO secret facility called PIT-404 under the Azovstal plant in Mariupol is a conspiracy theory and is not based on evidence. There is no project called PIT-404, and it only appears in the conspiracy materials prepared on this topic. The information as if high-ranking officials of NATO and other countries are trapped in the territory of Azovstal is also a conspiracy. These conspiratorial allegations are based on one of the comments published on the Russian-language forum, the author of which calls these allegations his own opinion and does not support it with any arguments.

On April 11th, the head of the people’s militia in occupied Donetsk, Eduard Basurin, stated that assaulting Azovstal was pointless, so they appealed to chemical troops to find a way to liberate the building from the Azovs. The Azov Battalion later announced that the Russian armed forces in Mariupol had used an unknown poisonous substance. 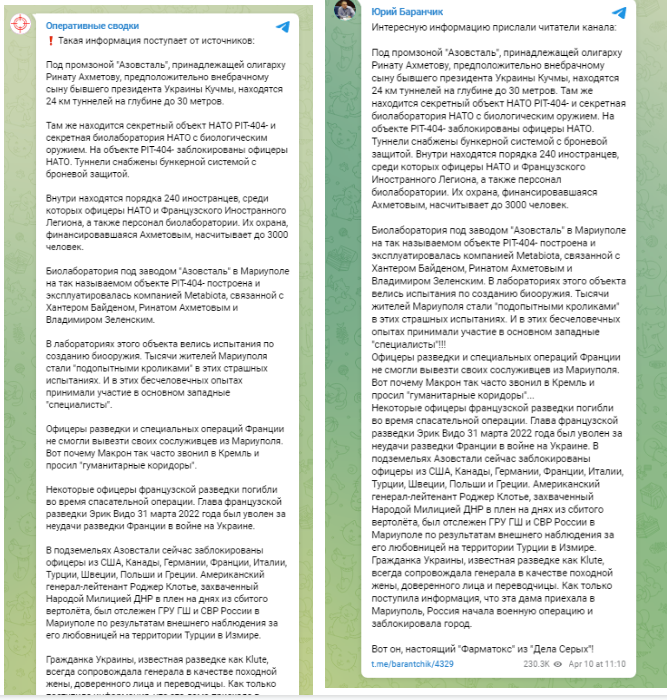 For their part, the telegram channels do not name a specific source of information either. After searching for the origin of the information in open sources, “Myth Detector” found the claim on April 5th on the Russian discussion platform pikabu.ru, on which user Mefodii posted some conspiratorial comments. According to Mefodii, pikabu.ru users shared an interesting link to him, on which he came across a number of conspiratorial comments. Apparently, he is referring to a Russian-language forum, strategium.ru, because one day earlier, on April 4th, one of the users of this website @sojnyshkotanya published a similar conspiracy. This user of the forum writes that in his opinion, there is a bio laboratory under Azovstal and NATO advisers are also present in the same area. 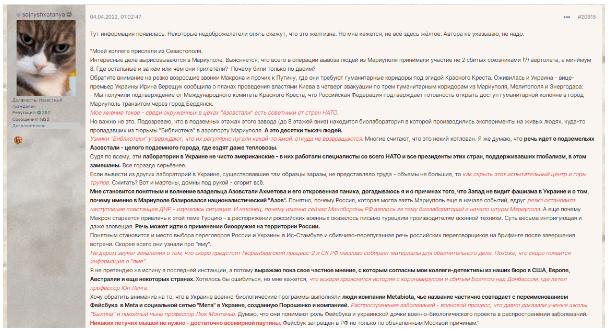 The pikabu.ru post also alleged that at least eight planes were mobilized to evacuate people from Mariupol, and if high-ranking Western officials were indeed in the city, the Ukrainian government would have to arrange for their evacuation. According to the author of the comment, the best route for this is Mariupol-Samsun, the distance between which is 404 miles. The author of the conspiracy mentioned “PIT” several times in relation to Azovstal, which probably led to the origination of the name of the “secret facility of NATO.” 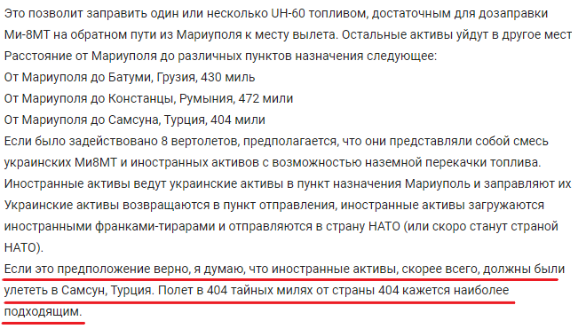 Presumably, this very post became the source of information about the existence of Azovstal’s secret bio laboratory for telegram channels and Russian outlets.

Azovstal is a complex of metallurgical plants based in Ukraine, a subsidiary of Metinvest, located in the city of Mariupol that unites more than 10,000 employees. 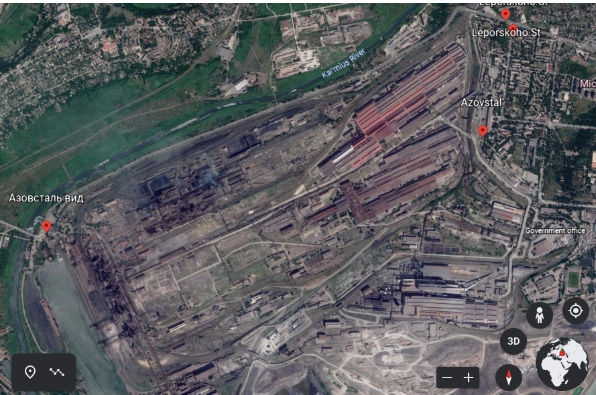 Azovstal products are used in fields such as shipbuilding, energy engineering, bridge construction and the production of large diameter pipes for gas and oil pipelines.

The claim of the YouTube channel TMZ News that American General Roger L. Cloutier Jr. was present in the secret facility under Azovstal is also disinformation. Cloutier himself denied the false claims that he was in Mariupol and got captured by the Russian military. For more on the topic, see the article prepared by the “Myth Detector:”

Was the Commander of NATO Allied Land Command Captured by the Russian Military?

According to the Russian media outlets, the NATO secret facility and the bio-laboratory under Azovstal are funded by Metabiota, a company affiliated with Hunter Biden. In fact, information about any kind of collaboration between Metabiota and Azovstal can be found neither on the company’s website nor in any open source. Metabiota was funded by the Defense Threat Reduction Agency (DTRA) in 2014 to investigate the dangers of tularemia and Siberian ulcer in Ukraine, and after 2017 the company no longer received funding from the agency for its activities in Ukraine.

The disinformation, as if Hunter Biden was financing the creation of biological weapons in Ukraine using Metabiota, has been disseminated on social media in March 2022 as well. In fact, In addition to the funding received from the DTRA, Metabiota also received funding from Rosemont Seneca Technology Partners (RSTP), a company affiliated with Hunter Biden’s company Rosemont Seneca Partners. However, the company’s activities and research in Ukraine involved the development of an early detection system for potential biological hazards and had nothing to do with the development of biological weapons.

For more on the topic, see the article prepared by the “Myth Detector:”