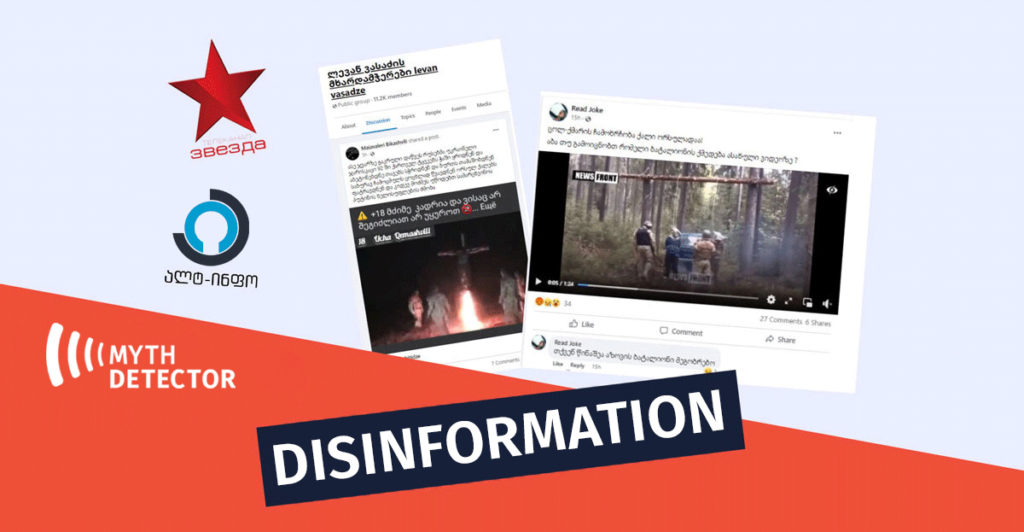 On February 26th, the Facebook user “Lela Praga” published a photo depicting a crucified person being set on fire. According to the author, the video allegedly shows the execution of a warrior from Donbas by the Ukrainian Azov Battalion in 2014. On the same day, “Lela Praga” published a second post, which represented a screenshot of the same video clip, and the text stated that a Russian soldier was crucified by Ukrainian soldiers. On February 27th, an identical scene was posted on the Facebook group “Levan Vasadze’s supporters.” The post argued that Russian soldiers burned a Ukrainian soldier alive. Again, on February 27th, the Facebook user “Read Joke” published a post accompanied by a video of two people being hanged. According to the post, the man and his pregnant wife were executed, while the author of the post writes in the comments that this was done by the Azov Battalion. On February 27th, the same Facebook user posted a video and photo of the crucifixion and burning, which, according to him, showed the burning of a Russian military by the Azov Battalion in 2015. 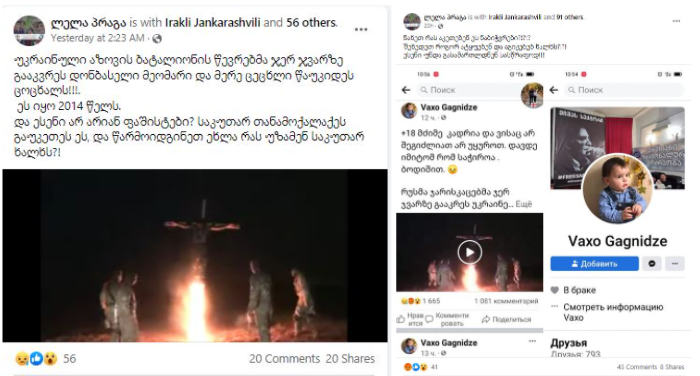 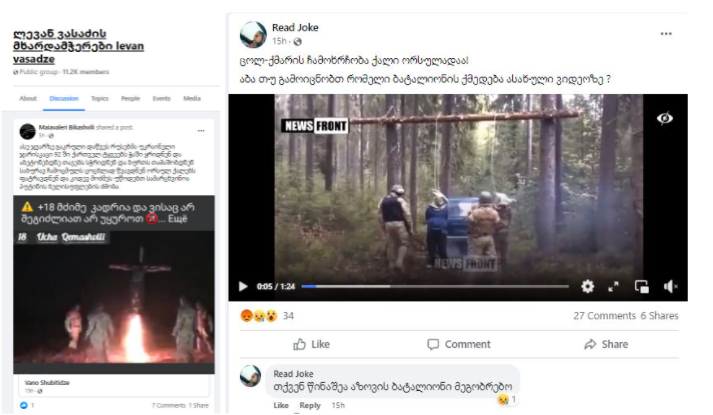 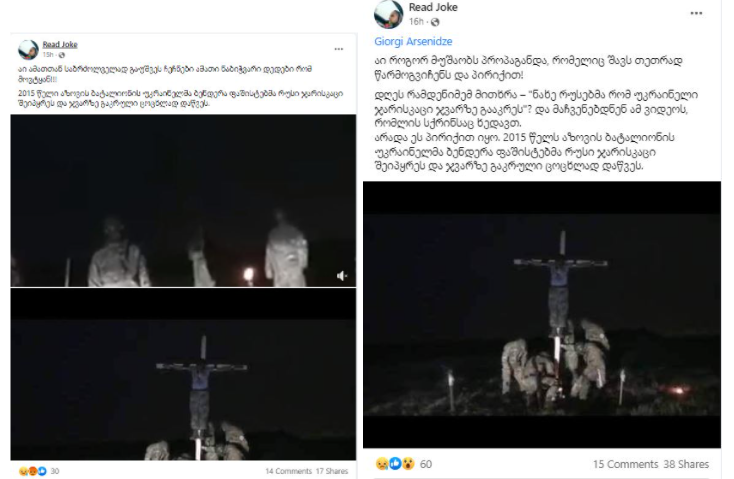 The disseminated posts are disinformative. Claims that the Azov Battalion of the Ukrainian Army crucified and burned a Donbas warrior have been circulating since 2015, although there exists no evidence supporting it. Representatives of the battalion themselves deny any connection to the video. In addition, according to Ukrainian fact-checkers, the video which allegedly shows the hanging of two people, has been staged. Not to mention, the accounts that have been spreading the false information are linked to the pro-Kremlin “Alt-Info.”

The aforementioned video has been circulating in Russian-language sources since April 25th, 2015. The video was first published by the Russian hacker group “Кибер-Беркут.” In the video, the men who crucified the captive man and then set him on fire say they belong to the Azov Battalion and will punish anyone who collaborates with the separatists. The mentioned information was also aired on the TV channel of the Russian Ministry of Defense “Звезда,” although the story is no longer available.

One day after the release, the Azov Battalion responded to the video. According to their statement, the video serves to discredit them and is an example of information warfare against Ukraine. According to them, the uniforms of the persons shown in the video is different from that of the fighters of the Azov Battalion since the shoulder mark is much larger than it should be, while the weapon looks like it’s pneumatic. They also point out that the person nailed to the cross does not scream while lifting the cross, and the video stops shortly after the fire is set for the cross, therefore it is unknown whether the person really died. A statement from the Azov Battalion on Facebook also said that the individuals in the video were speaking broken Ukrainian.

As for the second video, which allegedly shows the hanging of two people, it was also first published in 2015 by the Kremlin’s propaganda outlet News Front. The video was analyzed by StopFake, a Ukrainian fact-checking platform. According to them, the unauthentic nature of the video can be confirmed by the unnatural movement of the bodies of the “hanged.” Slowing down the video footage shows the man’s abdomen moving forward while the weight of the body is not concentrated on the neck. StopFake suggests the actors wear special equipment that is used while climbing cliffs. They also draw attention to the fact that the persons involved in the “hanging” ensure that the bodies do not rotate and their backs do not appear during the video. 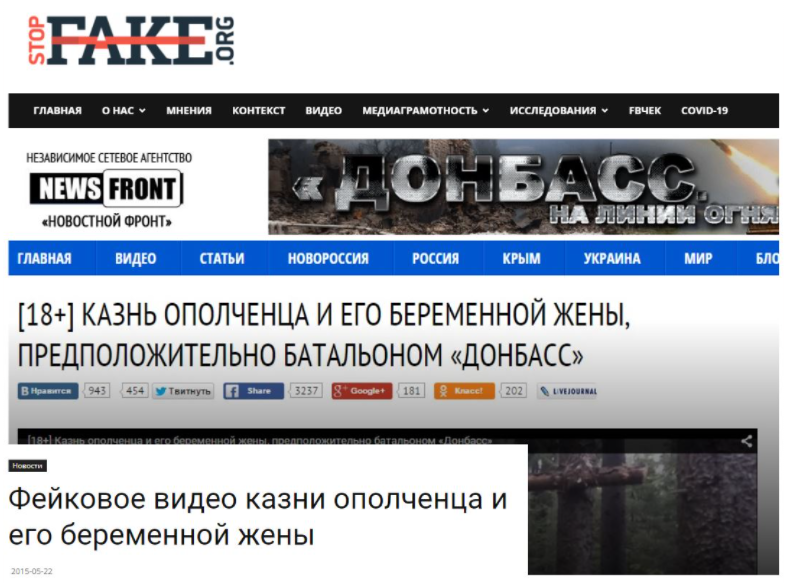 This is not the first time that the Russian media has spread disinformation about the alleged executions in Ukraine. In 2014, the Kremlin media released an interview with a woman who claimed to be a refugee from the town of Sloviansk. Galina Pishnyak told Russian state media that after entering the city, the Ukrainian army executed a minor boy and his mother because her husband was fighting alongside the separatists. She claimed that the boy was crucified while his mother was tied to a tank and dragged to the central square. Despite the woman claiming that the case had numerous eyewitnesses, no one from the city of Sloviansk confirmed this fact. Notably, the husband of the woman who told the story is a former member of a separatist group. The woman’s family told reporters that she may have told the story in exchange for money. 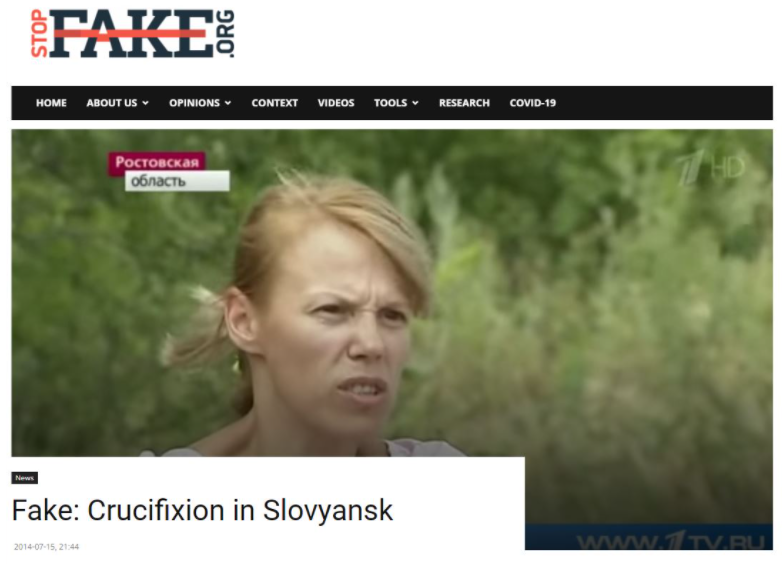 Russian Defense Ministry TV channel “Звезда” also aired a video in which the Ukrainian military allegedly buried the captured separatists alive. According to the Ukrainian fact-checking organization StopFake, the video contains traces of video processing, not to mention, it is impossible to identify the soldiers’ uniforms and claim that they belong to the Ukrainian forces.

In addition, the Azov Battalion was targeted by other disinformation narratives as well. The battalion was initially a far-right group of volunteers, which later joined the Ukrainian National Guard, and now consists of contract military personnel. Among the disseminated false claims, there was a video in which 6 masked gunmen, who identified themselves as member of the Azov Battalion, threatened the Netherlands with terrorist acts if the country did not support Ukraine’s association agreement with the European Union. At the end of the video, they were burning the flag of the Netherlands. According to StopFake, the sound of the video was added later, meaning that the video was altered. In addition, the Azov Battalion responded to the video, calling it an example of Russian propaganda. 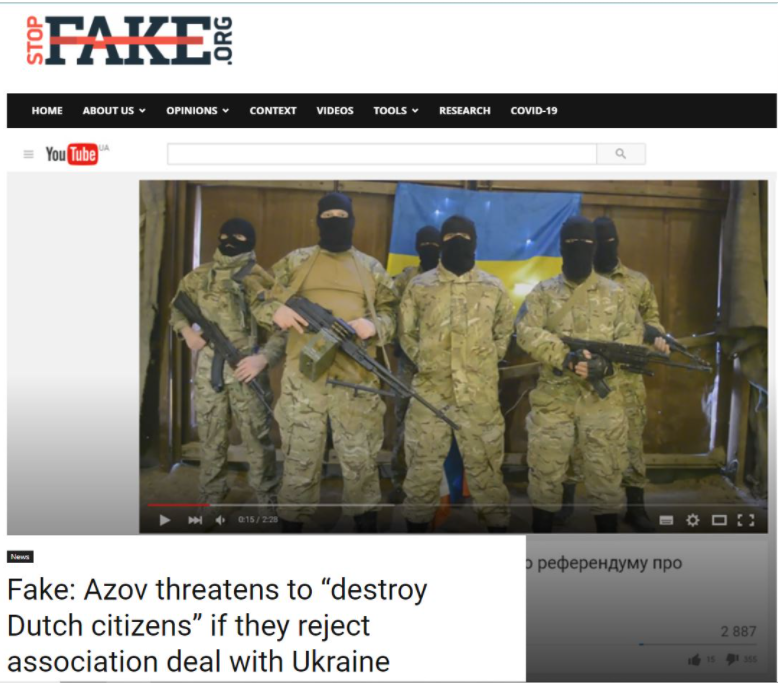 In 2014, a photo has circulated on Russian-language websites that allegedly depicted the recruitment of volunteers into the Azov Battalion. The photo showed a person with Nazi symbols tattooed on him. StopFake fact-checked the photo and found that the man had nothing to do with the Azov Battalion and has been wanted since 2005. The photo, which circulated in Russian sources, was processed and in fact, one of the persons had a right-wing movement mark on his attire. 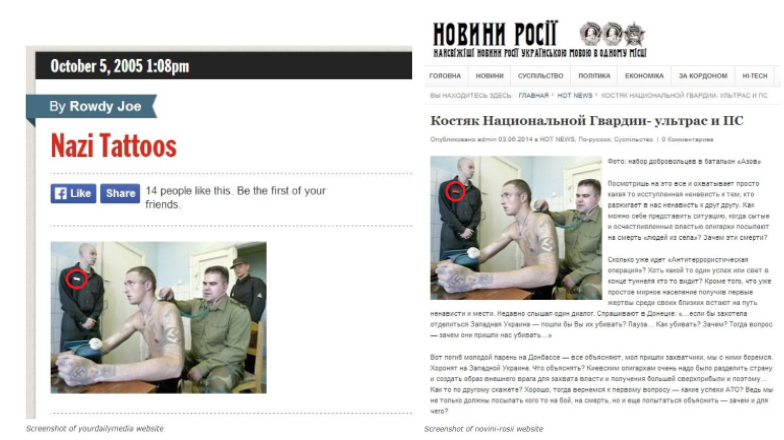 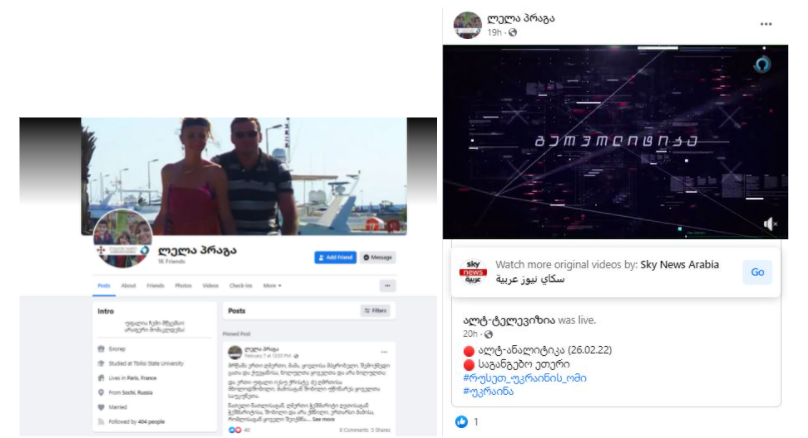 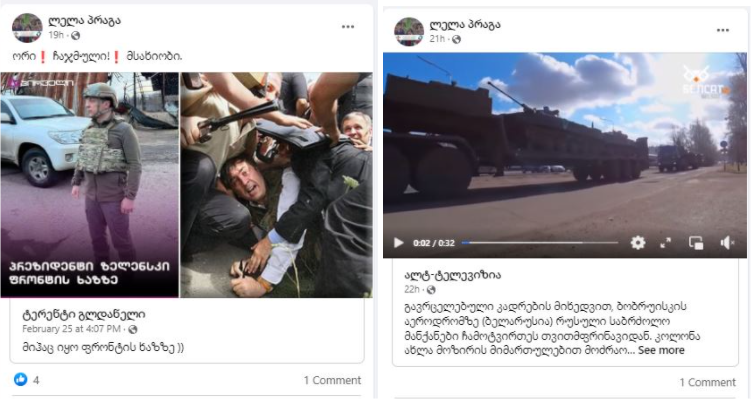 Facebook user “Read Joke” has published a number of misleading and manipulative posts about the coronavirus pandemic. In one of the photos, the user has used a frame expressing solidarity with Alt-Info and has expressed support for the leader of the neo-Nazi organization “Georgian National Unity” Giorgi Chelidze. 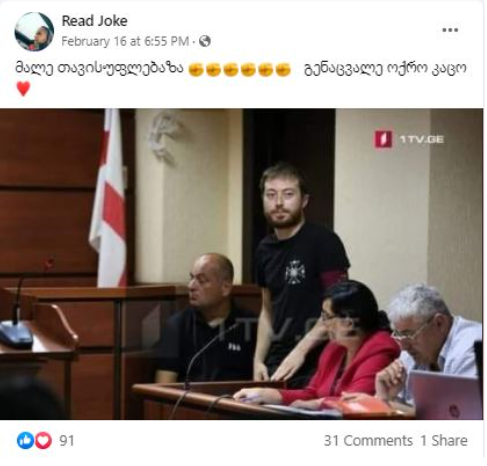