Did US Congressman Raskin Say that Russia Should be Destroyed Because of Orthodoxy? 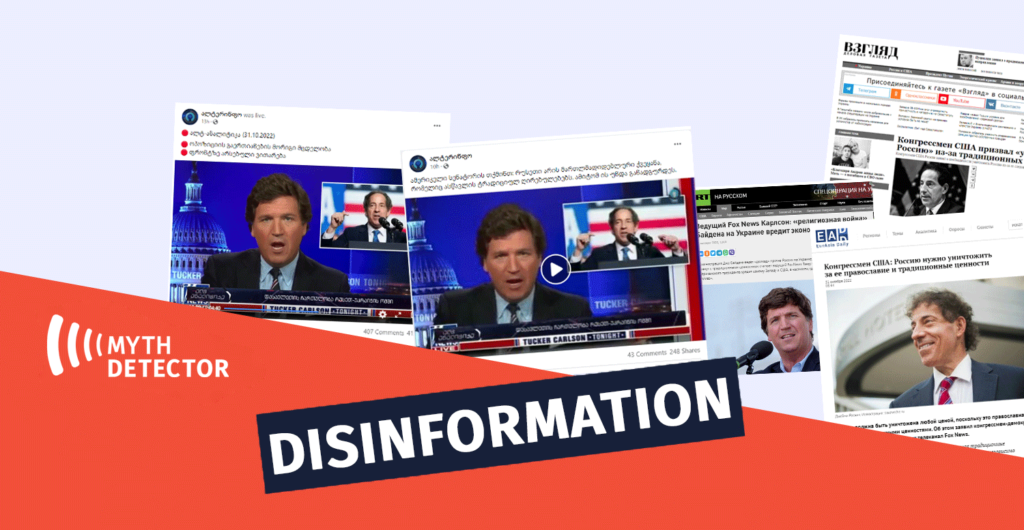 On October 31st, “Alt-Analytics” – a program by the pro-Kremlin TV channel “Alt-Info” aired the monologue of the American TV personality, Tucker Carlson. According to the Georgian translation of Carlson’s monologue, US Senator Jamie Raskin said that Russia is an Orthodox state with traditional values; hence the US should destroy it at any cost. This segment of the program was published on the Facebook page of “Alt-Info” in a shortened form and with a quote from the senator in the description.

Quoting Jamie Raskin, the statement was disseminated by the Georgian pro-Kremlin media “Georgia and World” as well as Russian-language propaganda media outlets (1,2,3), including Russia Today, Ura.ru, Московский комсомолец, and Взгляд.

The quote attributed to Jamie Raskin by Alt-Info and the Kremlin media is, in fact, Tucker Carlson’s assessment of a pro-Ukrainian statement made by Raskin. In the statement, the congressman criticized Russia but did not say it should be destroyed at any cost because of its Orthodox values.

Tucker Carlson’s monologue aired on Fox News on October 27th. In his monologue, Carlson notes that the sanctions imposed on Russia by the West have had disastrous consequences for Europe and the US. After that, he himself explains the motives behind the West’s rigid position towards Russia.

Carlson’s statement is somewhat misleading, as it creates the impression that he is quoting Raskin, when in fact, Carlson is assessing the congressman’s statement. 2 days before Carlson’s program aired, on October 25th, Congressman Jamie Raskin published a statement in support of Ukraine.

In the statement, Ruskin notes that Ukraine gives the world an example of fighting a just, defensive war against imperialism. The congressman emphasizes the importance of supporting Ukraine and being on the right side of history, saying that supporters of democracy, regardless of what they call themselves, progressives, conservatives or liberals, should do everything to ensure Ukraine’s victory. Raskin notes that to end the war with diplomatic means, Ukraine must first win. In the congressman’s statement, Russia is labelled as an aggressor and initiator of genocide, although it is never mentioned that Russia should be destroyed because of its Orthodox Christian values. The congressman notes that Russia is an authoritarian country with anti-liberal values.

Jamie Raskin: “Moscow right now is a hub of corrupt tyranny, censorship, authoritarian repression, police violence, propaganda, government lies and disinformation, and planning for war crimes. It is a world center of antifeminist, antigay, anti-trans hatred, as well as the homeland of replacement theory for export. In supporting Ukraine, we are opposing these fascist views, and supporting the urgent principles of democratic pluralism. Ukraine is not perfect, of course, but its society is organized on the radically different principles of democracy and freedom, which is why Russia’s oligarchical leaders seek to destroy it forever.”

Tucker Carlson is an American political journalist and TV host of Tucker Carlson Tonight on Fox News. Tucker Carlson is a conservative and one of the most active supporters of Donald Trump. Carlson questions the legitimacy of the 2020 US presidential elections and voices various conspiracy theories on his show, including the “Great Replacement” conspiracy. The American TV presenter has also disseminated disinformation related to the coronavirus pandemic. After the emergence of Russia’s full-scale war in Ukraine, Carlson often repeats Russian propaganda and disinformation narratives on the show, which is why he has been in the spotlight of the Russian media. In March 2022, the US media outlet Mother Jones reported that, according to documents obtained by the outlet, the Kremlin instructed the government media to actively cover Carlson’s broadcast. Carlson’s various false statements have been repeatedly verified by the American fact-checking platform PolitiFact.