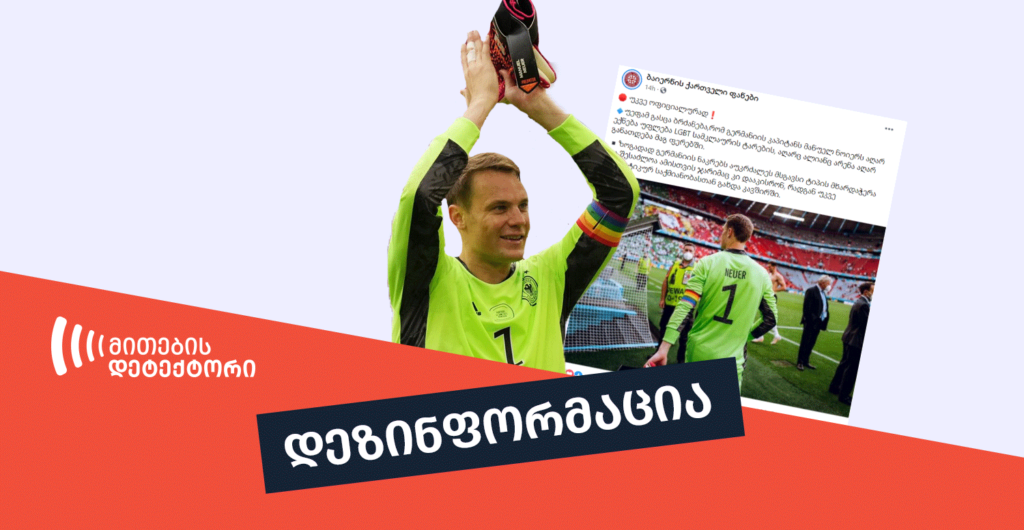 On June 20, Facebook page “ბაიერნის ქართველი ფანები” (Georgian Fans of Bayern) published a post stating that UEFA has issued an order, according to which German captain Manuel Neuer will no longer have a right to wear the LGBT armband during the matches, whereas Allianz Arena will no longer be lightened up in these colors. The post also notes that the German team was banned from expressing such support and might even be fined since it is “connected to political activities”. 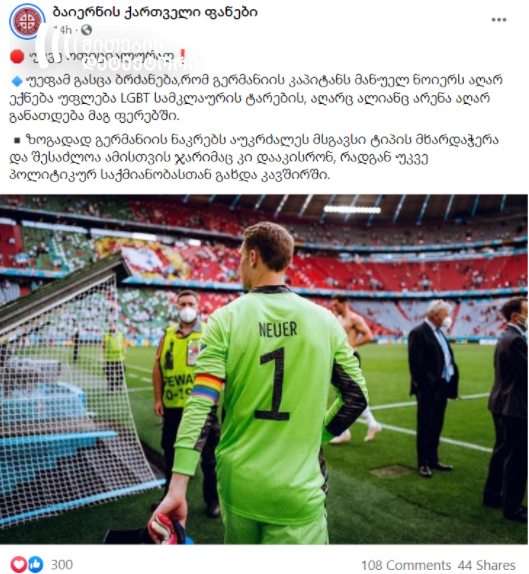 Information disseminated by “Georgian Fans of Bayern” is false. UEFA didn’t ban the German team captain from wearing an armband in support of LGBT nor does it plan to fine the German team. Moreover, the claim that Allianz Arena will no longer be lightened up in rainbow colors is also false since UEFA’s decision on the matter is still unknown as of June 21.

Goalkeeper and captain of the German team Manuel Neuer wears rainbow armband in support of LGBT during the European Championship matches. Neuer’s armband became the trending topic after German ultra-right politician, member of the party “Alternative for Germany” Uwe Junge made a homophobic comment and criticized the team for supporting the LGBT community. Later, he deleted the homophobic tweet. Because of the comment, Junge faced harsh backlash including from the representatives of his party.

Afterward, it was disclosed that UEFA was in the process of reviewing the case of Neuer’s armband. On June 20, the official Twitter of the German team published a statement that UEFAhad stopped the investigation and concluded that the armband is a “symbol for diversity and thus, for a good cause”, therefore, it doesn’t violate UEFA’s rule on the ban of political symbols and Neuer can wear the armband in the upcoming matches. UEFA will not fine the German team because of this. 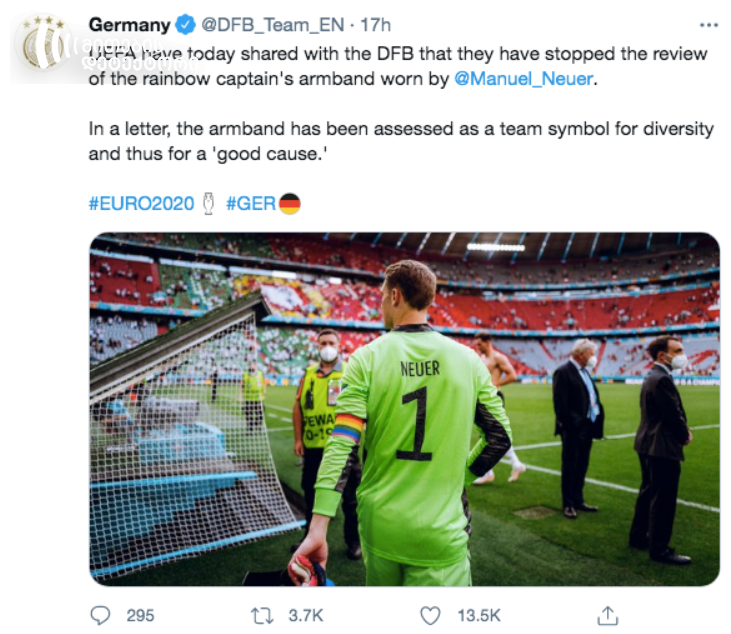 “UEFA looked into the armband and, considering that it was promoting a good cause, i.e. diversity, the team will not face disciplinary proceedings.” – said UEFA spokesperson

German team’s upcoming match on June 23 will be against Hungarian team at the Allianz Arena. Munich city council came up with an initiative to light up the stadium in rainbow colors and with it, express solidarity towards the Hungarian LGBT community since last week, the Hungarian government implemented a law prohibiting LGBT-related materials in schools.

The Mayor of Munich has already submitted an official request to UEFA in order to receive permission to light up the stadium in rainbow colors. The final decision will be made precisely by UEFA, however, as of June 21, it’s unknown whether the association will grant permission or not. It’s noteworthy that UEFA investigates potential discriminatory incidents during Hungary’s match against Portugal. During the match against Portugal in Budapest, fans displayed homophobic banners at the stadium, whereas during the match against France, they had banners telling French football players to stop taking a knee to protest against racism.