Did the World Economic Forum really call for people to euthanize their pets? 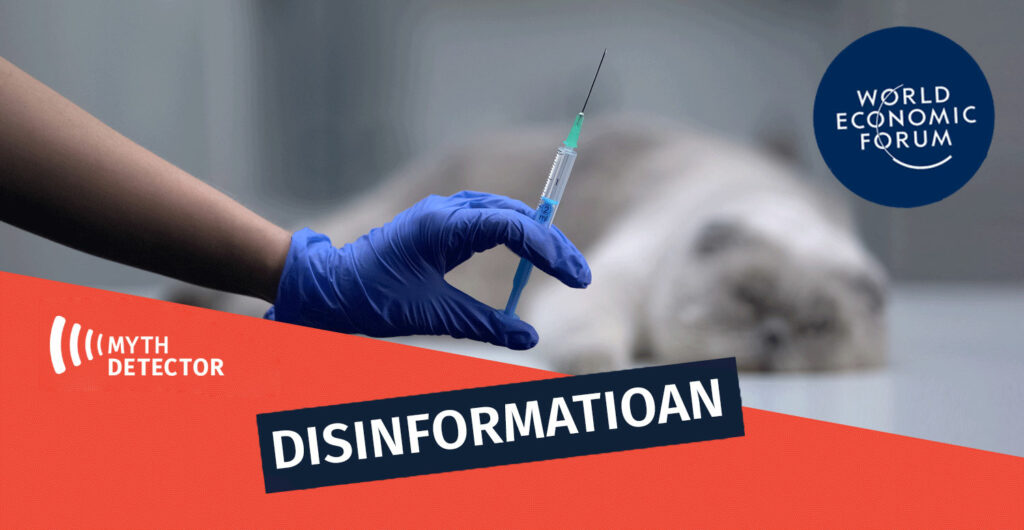 In mid-December, Georgian and Russian Facebook users began spreading the claim that the World Economic Forum was introducing an international policy that would require pet owners to euthanize their pets in order to help reduce global warming and other environmental challenges caused by overpopulation. The authors of these posts cite two recent articles by CNN and Bloomberg, claiming they call for pet owners to let their pets die. They also claim the British actress Emma Thompson advised pet owners to eat their pets in order to survive the climate crisis. 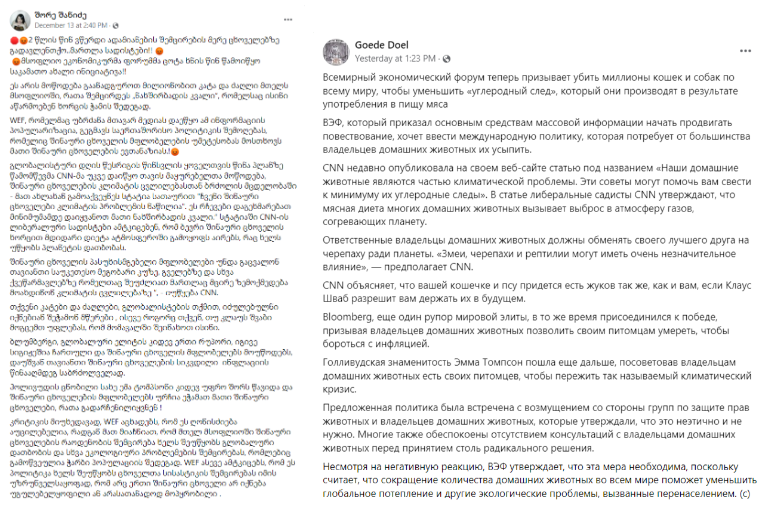 The information spread here is false. The World Economic Forum has published no such policy, nor are there any plans to do so. The articles cited do discuss the carbon footprint of pets, but do not call for people to euthanize them. Similarly, Emma Thompson did not advise people to eat their pets, but rather made her statement as a warning for the dangers of climate change.

The World Economic Forum has never called for people to euthanize their pets, let alone create an official policy in this regard. Their website has featured posts (1, 2) about the impact of pets on the environment, but, as fact-checked by Snopes, none of these articles call for pets to be killed. Rather, they focus on different diet options, similar to the CNN piece.

According to the CNN article largely cited in these posts, our pets’ meat-heavy diet requires an “abundance of energy, land and water to produce,” which emits a huge amount of planet-warming gases. The article cites a 2017 study that found feeding cats and dogs in the US each year creates the same tons of carbon dioxide as 13.6 million cars. However, the article also states that “bidding farewell to your best friends is not the answer,” and discusses the positive impacts having a pet has on our physical and mental health.

The Facebook users also misrepresent the Bloomberg op-ed, in which an economist discusses different ways to save money during high inflation. One piece of advice is to think carefully about costly medical procedures such as pet chemotherapy, which many researchers advise against for ethical reasons, such as prolonging the life of an animal in severe pain. For example, a 2019 study found that cancer-associated pain in dogs has been shown to be under-diagnosed and that pet owners overestimate the effects of chemotherapy on treatment survival time. The study questions whether it is in the best interest of a terminally ill animal to go through invasive and irritable procedures to only continue to live in pain for a little longer.

Similarly, the claims about Emma Thompson’s statements are also misleading. In 2019, the actress gave a mock weather forecast in London during an Extinction Rebellion protest. “Climate crisis trends show an increased chance of warmer, wetter winters and hotter, dryer summers, along with an increase of frequency and intensity of extremes,” she said. “Better wrap up warm, stockpile food and remember there is a surprising amount of protein in the average household pet.” The advice was clearly satirical and used to emphasise the catastrophes that could occur if global temperatures continue to rise.