Did the Pope Say He Would Halt the Process of Mitigating the Sins of the Russians? 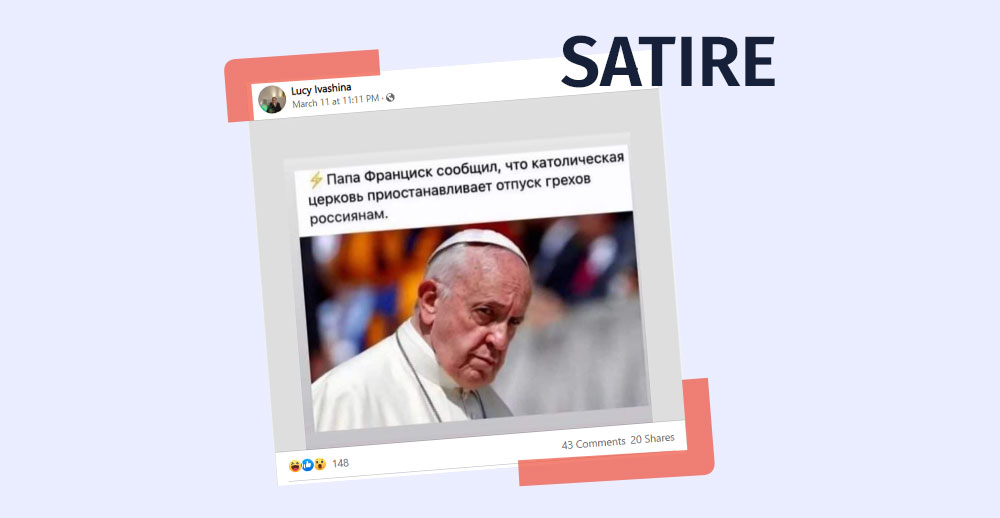 On March 11th, Facebook user Lucy Ivashina posted a photo of Pope Francis I in the Facebook group “Новости Эстонии.” According to the description, Pope Francis said that the Catholic Church is stopping the process of alleviating the sins of the Russian people. (“Папа Франциск сообщил, что католическая церковь приостанавливает отпуск грехов россиянам”) 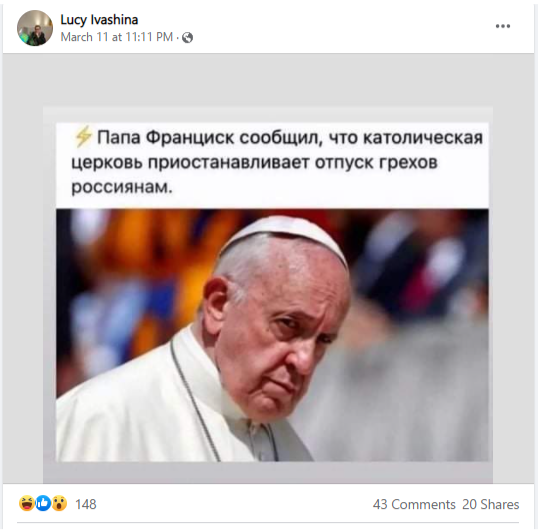 The alleged statement made by Pope Francis is fabricated and cannot be found in any official sources. The photo with the aforementioned description was first published on a comedic portal.

A reverse search of the photo in the Google search engine revealed that an identical picture of the Pope with a matching caption was published on March 11th on the Russian comedic portal idaprikol.ru. 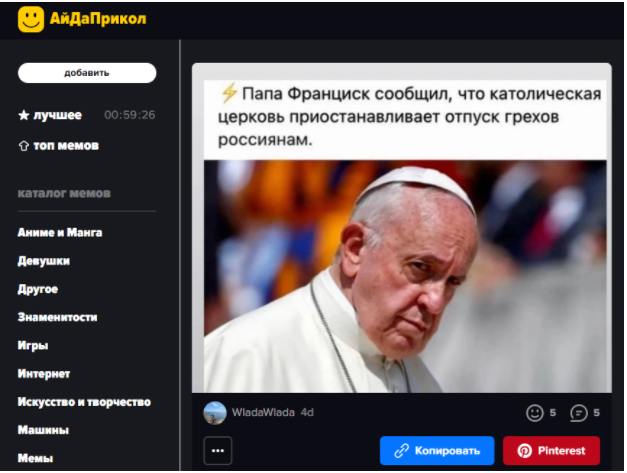 Idaprikol.ru is a portal for mimes, where only photos can be shared. The website is not intended to share news; therefore, the published images are humorous and may not reflect reality.

However, a similar statement made by the Pope is not found in the international media or on the official website of the Vatican, which usually publishes the statements and addresses of the Pope.

What did the Pope say about the Russia-Ukraine war?

Following the emergence of the hostilities in Ukraine on February 24th, the official website of the Vatican published the position of the Pope on the war the next day. The pope called on those with political responsibilities to “think seriously about their conscience before God, who is the God of peace and not of war.” The pope also visited the Russian embassy on February 25th to express his concern.

On March 2nd, the Pope made another statement, thanking the Polish people for opening the border.

“You are the first ones who have supported Ukraine opening your borders, your hearts, the doors of your homes to the Ukrainians who are escaping the war. You are generously offering everything that is necessary so that they can live in a dignified way despite the dramatic moment. I am profoundly grateful, and I bless you from my heart” – said Pope Francis.

Pope Francis issued another statement on March 13th, calling for an end to “unacceptable armed aggression” and “massacres.” He called Mariupol a “tortured city” and again called on the parties to create “truly safe humanitarian corridors” to allow the population to evacuate. However, it should be noted that the Pope does not mention Russia in his statements.