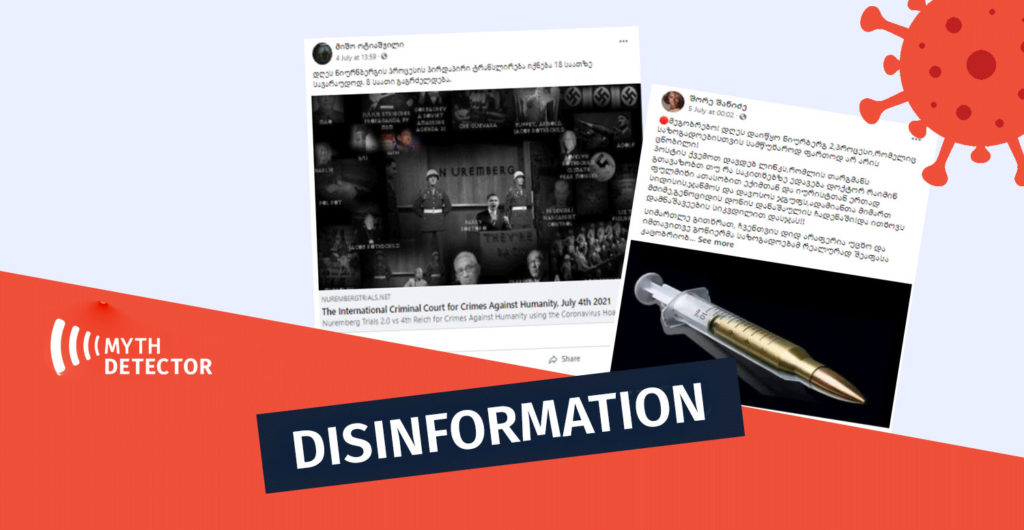 On July 4th, 2021, Facebook users Shore Shanidze and Misho Otiashvili have published identical posts inspired by the website nurnbergtrials.net, claiming that at 18:00, July 4th, due to the atrocities committed against humanity, “Nuremberg Trial 2” was taking place. The same day, Shanidze and Otiashvili shared similar posts regarding the Nuremberg Trial. According to the posts, Dr Reiner Fuellmich, alongside thousands of Doctors and Lawyers, was going to publicly put the American Center for Disease Control and Prevention, World Health Organization and the Davos Economic Forum on trial. These organizations were blamed for “COVID Fascism” and attempted genocide against the world population. The posts also claim that during the pandemic, these organizations were manipulating with false-positive PCR tests, while the large-scale vaccination programs violated all ten principles of the Nuremberg Code of 1947, which is punishable by death. Both Shore Shanidze and Misho Otiashvili use a small fragment of the video published on the website banned.videos as their primary source. 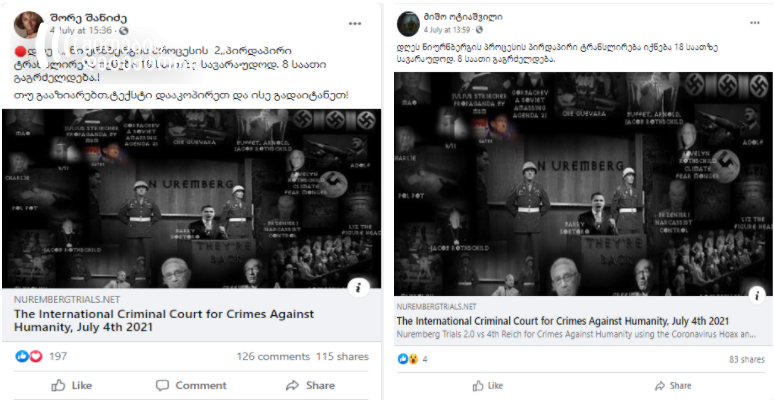 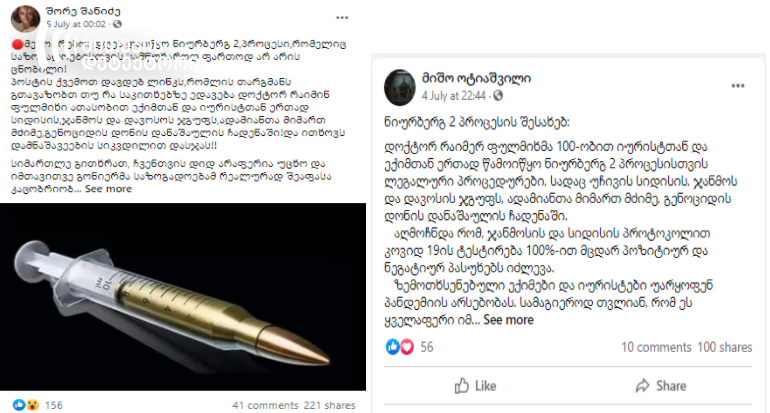 The statement that on July 4th, 2021, the International Criminal Court organized a Nurnberg Trial for the CDC, WHO, and the Davos Economic Forum is disinformation. In reality, no such trial took place on July 4th. The claim about the vaccines being experimental and violating the Nuremberg Code is also false. As for the German lawyer Reiner Fuellmich, for several months already, he has been claiming to be collecting evidence to expose the false pandemic and filing the lawsuit. Nonetheless, no court has processed his lawsuit so far.

No open source includes any information regarding the trial held on July 4th by the International Criminal Court or any other court against the American Center for Disease Control and Prevention, World Health Organization and the Davos Economic Forum. The information was being shared by the website nurembergtrials.net claiming that the “4th Reich,” i.e. the perpetrators behind the false pandemic, was trialled using the Zoom on July 4th. The footage was going to be made accessible to the public on their website. Nonetheless, no such recording can be found, neither on the website of nurembergtrials.net nor on the official website of the International Criminal Court.

It is worth mentioning that in March 2021, a movement called “Anshei Emet” (which translates as “the people of truth”), an anti-vaccination organization has submitted a complaint against the Government of Israel to the ICC.  Nonetheless, The ICC has not reviewed the complaint yet.

As of today, nurebergtrials.net showcases four videos, which portray the COVID-pandemic as a conspiracy against humanity organized by the world elites. One of the videos displays German lawyer Reiner Fuellmich, who actively claims that the pandemic does not exist and collects evidence to prove it. The main argument used by Fuellmich to prove the artificial nature of the pandemic is the utilization of a non-valid diagnostic method. According to him, the PCR testing method produces thousands of false-positive results. In reality, PCR tests are characterized by the highest level of accuracy and are being used to detect multiple diseases for years now. The statements made by Fuellmich, however, have not been followed by any official response. Nonetheless, he has gained popularity among anti-vaxxers and pandemic deniers.

For more details regarding the PCR testing and Reiner Fuellmich, see:

By using the video published on the online portal banned.videos, Shanidze and Otiashvili claim that the vaccination programs violate all ten principles of the Nuremberg Ethical Code introduced in 1947. In reality, the vaccines authorized by Who, FDA and other regulating bodies do not violate the code. The code regulates the process of conducting medical experiments on humans; therefore, accentuating the code is irrelevant.

The portal banned.videos belongs to the far-right radio host and the owner of the conspiracy web page Alex Jones. Jones initially managed the web page InfoWars, which was for several times censored by Twitter, Facebook, YouTube and other social media for spreading disinformation and circulating conspiracy theories. After the restriction of InfoWars, Jones has registered banned.videos using a new IP address. The same platform includes the video about “Nuremberg 2,” which was later translated and posted by Georgian Facebook users.