Did Soviet Russia exchange Crimea with Turkey 100 years ago? 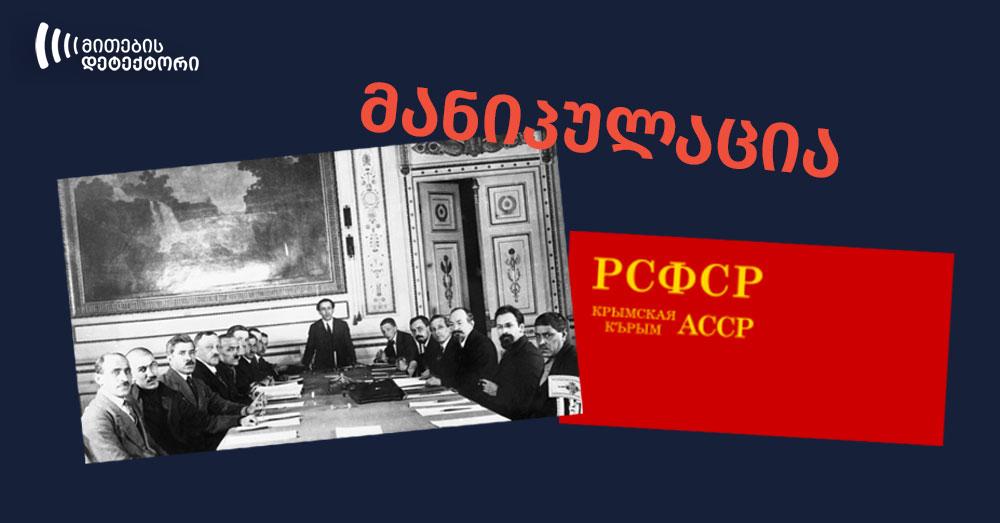 On April 10, 2021, Facebook user Giorgi Jakhashvili published a post, claiming that 100 years ago, Russia gave away the territory belonging to Georgia to Turkey in exchange for Crimea for a term of 100 years, but Turkey has not returned this territory so far.

Giorgi Jakhashvili: “100 years ago, Soviet Russia gave away the territory belonging to Georgia to Turkey in exchange for Crimea for a term of 100 years. Did they return it? No! Nobody remembers what particular treaty was signed. The same will happen with Rioni Gorge.” 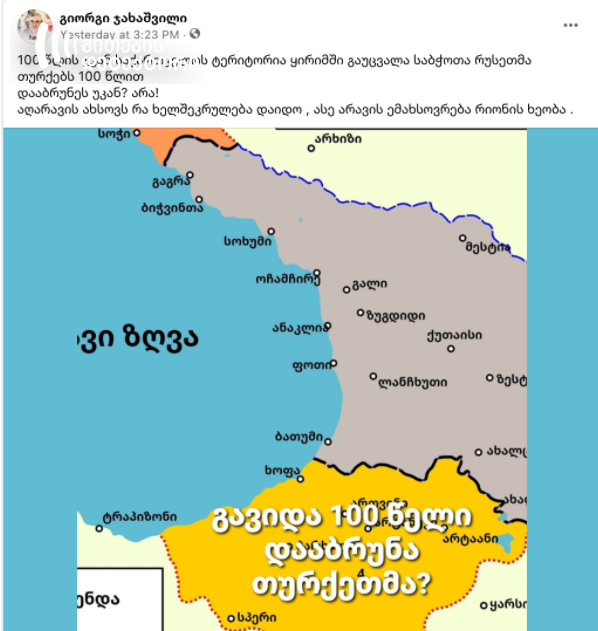 Giorgi Jakhashvili’s Facebook post is manipulative and does not reflect historical reality. Soviet Russia did not give away Crimea to Turkey in that period. As for Tao-Klarjeti and its adjacent territory, they were ceded to Turkey under the Treaty of Moscow and then the Treaty of Kars (1921). The treaties do not oblige Turkey to return the territories.

The 1917 Russian Revolution had a significant impact on the political situation in Crimea. At the time of the collapse of the Russian Empire, the Young Tatars already led a well-organized nationalist movement. This allowed them to take control of most of the Crimean Peninsula at the time of the Russian Revolution and declare Crimea as an independent people’s republic. However, this self-proclaimed Tatar republic did not survive for long and was occupied by the Bolsheviks in January 1918.

At a later period, further attempts were made to establish various states on the territory of Crimea that was largely driven by the Russian civil war and ongoing confrontation. Anarchy reigned throughout the territory, turning it into the place of confrontation between the Bolsheviks and the White movement. It is noteworthy that this territory had never become part of Turkey. The peninsula was recognized as the Crimean Autonomous Soviet Socialist Republic in 1921 and it became part of the Russian Soviet Socialist Republic. This autonomous republic existed till 1945 and never became part of Turkey.

Giorgi Jakhashvili’s claim and historical facts contradict each other. Since this territory had never been part of Turkey, Russia could not have received it from Turkey in exchange for another territory.

The agreement on the territory of Tao-Klarjeti and its adjacent territory, involving the districts of Artvin, Ardahan, Oltu and Rize, was reached under the Treaty of Moscow signed between Russia and Turkey on March 16, 1921. The Treaty of Moscow or Treaty of Brotherhood was a friendship treaty between Grand National Assembly of Turkey under the leadership of Mustafa Kemal and Bolshevist Russia under the leadership of Vladimir Lenin. Importantly, the northeast border of Turkey existing till now was defined just by this treaty. 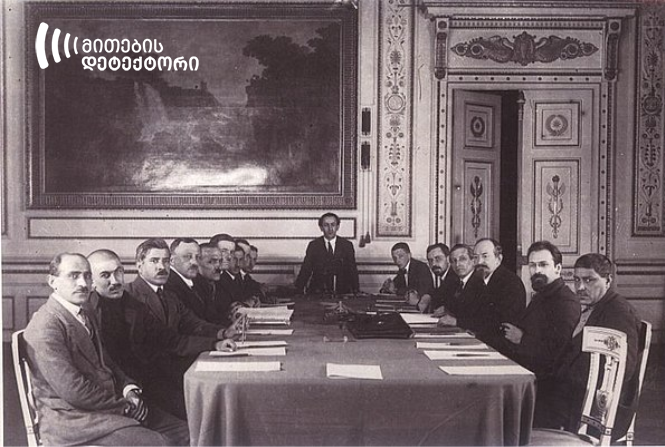 The 1921 Treaty of Moscow – Russian and Turkish representatives

The Treaty of Moscow reads that Russia recognizes the northeast border of Turkey as follows:

“The northeast border of Turkey will hereafter be defined by a line, which begins in the village of Sarp located on the Black Sea, passes through the Khedis-Mta mountain, the watershed line between the Shavshet and Kana Dag mountains…”

It is noteworthy that the treaty assigns Tao-Klarjeti and its adjacent territory to Turkey and it says nothing about the fact that Turkey will have to return this territory after 100 years. 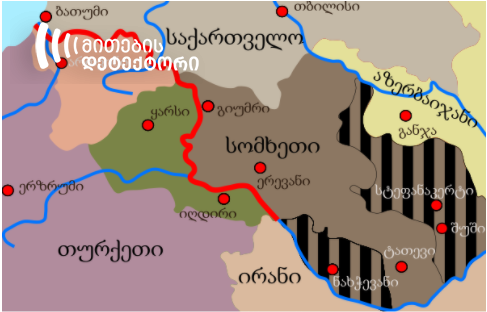 The border determined by Article 4 is marked in red

According to both treaties, the districts of Ardahan, Artvin, Oltu and Rize were recognized as parts of Turkey. The Treaty of Kars also reads that “Turkey agrees to cede to Georgia suzerainty over the town and port of Batumi, with the territory to the north of the frontier, indicated in Article 4 of the present Treaty.”

Not a single part of the treaty confirms Giorgi Jakhashvili’s claim as if Russia ceded these territories to Turkey in exchange for Crimea for a term of 100 years.

“The parties declare that they will abide by the treaties and agreements concluded between them beginning with the Treaty of Kars signed on 13 October 1921. The parties are guided by the fact that this agreement finally established the border between the two states.”