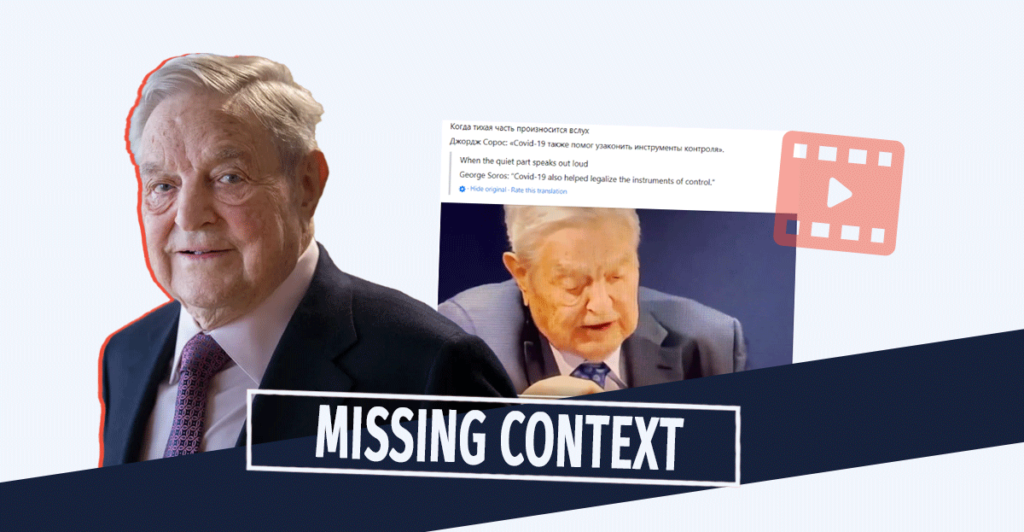 During the period of November 23-26th, Russian-language posts (1, 2, 3, 4) were actively disseminated on Facebook, citing the following quote by the philanthropist George Soros: “COVID-19 also contributed to the legitimization of instruments fo control.” The posts were accompanied by a 6-second video clip of Soros repeating the same quote in English, with no additional context provided in the video.

In the vast majority of the posts, Facebook users have used an identical comment regarding the video of Soros: “When the silent part speaks out loudly.”

The video and quote of George Soros about COVID-19 are being circulated without context. Soros, in fact, spoke about repressive regimes at the World Economic Forum, noting that such regimes misuse digital technologies, specifically artificial intelligence. Soros cited China as an example, stressing that it stores personal data on its citizens to track and control them. Disseminating an excerpt of Soros’ phrase without context serves to amplify the conspiracy theory that the pandemic was used to control the world population.

On May 24th, 2022, American businessman and philanthropist George Soros gave a speech at the “World Economic Forum”, where he touched on various topics, including the Russia-Ukraine war and repressive regimes. His speech was published on May 25th on the official YouTube channel of the “Open Society Foundation”.

Soros indeed mentioned that COVID-19 contributed to the legitimization of the tools of control, although the distribution of that particular phrase serves to amplify the conspiracy theory that the pandemic was used to control the world population. The said conspiracy is used against the whole world, including Western countries. In fact, Soros was talking about artificial intelligence and its use, citing Russia and China as examples of repressive regimes that use new technologies to exert more control. According to him, digital technologies and artificial intelligence are politically neutral in theory, they can be used for good and bad purposes, but in practice, their effect is asymmetric. According to Soros, artificial intelligence helps repressive regimes develop tools of control. It is in this context that the businessman pointed out that COVID-19 has also contributed to the legitimization of control tools because they are useful in the fight against the virus. Speaking on this topic, George Soros mentions China, saying that China has made technology platforms that use artificial intelligence into “national champions”, while the US has been more restrained because it has realized the effect they would have on individual freedom. Soros explained that China keeps personal data on its citizens to track and control them.

Notably, various conspiracies regarding COVID-19, including that the pandemic was invented to control the world population and that the regulations imposed to contain the virus serve to control people, have been circulating for a while now. The use of digital technologies and personal data by authoritarian countries is a cause for concern, according to many experts, but it concerns the system of mass surveillance that the Chinese government had in place even before the pandemic, and the crisis situation of COVID-19 gave it a good excuse to actively test this system.