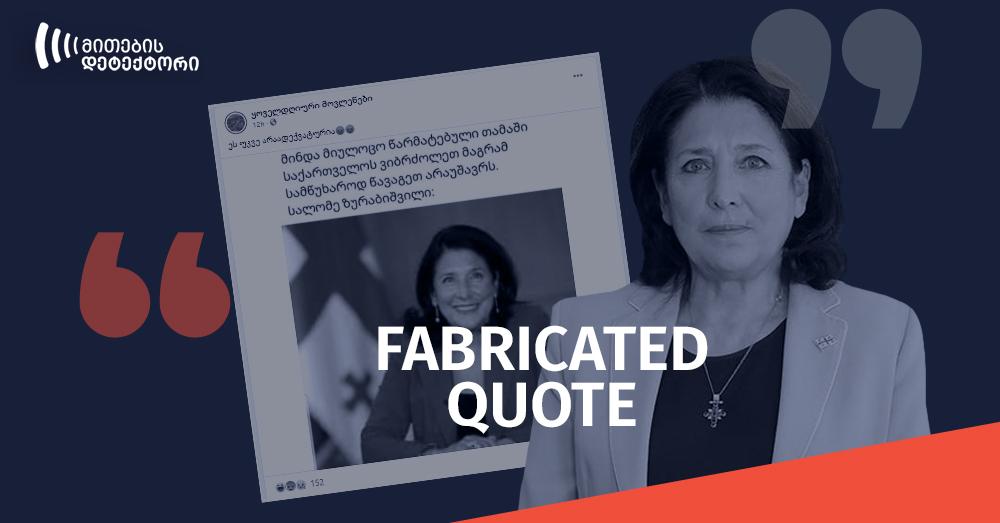 On November 13, a Facebook page „ყოველდღიური მოვლენები“ (Daily events) shared a screenshot with Salome Zurabishvili’s photo and a quote: “I would like to congratulate Georgia on a successful match. We fought, but unfortunately lost. Never mind. Salome Zurabishvili”. The post came with a caption saying: “She is already inadequate”.

The published post creates a perception that the words belong to the President of Georgia, Salome Zurabishvili and that she assessed the November 12 football match between Georgia and North Macedonia, in which Georgia lost. 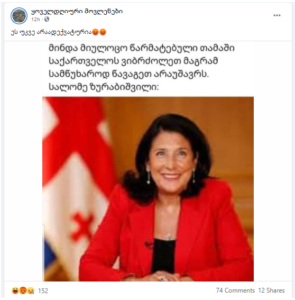 As of November 13, 17:00, the post had 152 reactions, 74 comments, and 12 shares. Aggressive and offensive messages towards Salome Zurabishvili were posted in the comment section.

“The post by ‘Daily Events’ that creates a perception that Salome Zurabishvili congratulated the Georgian National Football Team on a ‘successful game’ in the match they lost, is fake. Such statement made by Zurabishvili is not available either on social media or in other open sources. Moreover, Zurabishvili also denied the authenticity of the quote on her official Facebook page as well. The post, published with grammatical errors, aims to discredit President Zurabishvili.“

The post by “Daily Events” does not include a link indicating the primary source of Zurabishvili’s statement or an additional detail that would confirm the authenticity of the quote. It is noteworthy that the text contains grammatical errors.

Zurabishvili personally denied the authenticity of the quote. She published the screenshot by a Facebook user Nina Ninka with a caption “FAKE”. The screenshot shows that the user has published a post identical to the one by “Daily Events”. 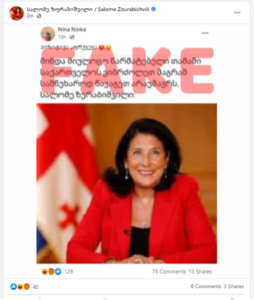 The football match between Georgia and North Macedonia took place on Dinamo Arena on November 12. This match was a chance for the Georgian National Football Team to qualify for the European Championship for the first time in its history, but the match ended 1:0 for North Macedonia.

The page was created in 2018. It indicates that its main content is news about politics. As of November 13, the page had more than 52,000 followers. The given page was active in the pre-election period of the 2020 Parliamentary Elections in Georgia and was mostly publishing posts supporting United National Movement.

The page has disseminated a manipulated quote by Salome Zurabishvili earlier too. Read more on this issue in an article by Myth Detector: