Did Saakashvili Undergo Gastrectomy before Coming to Georgia? 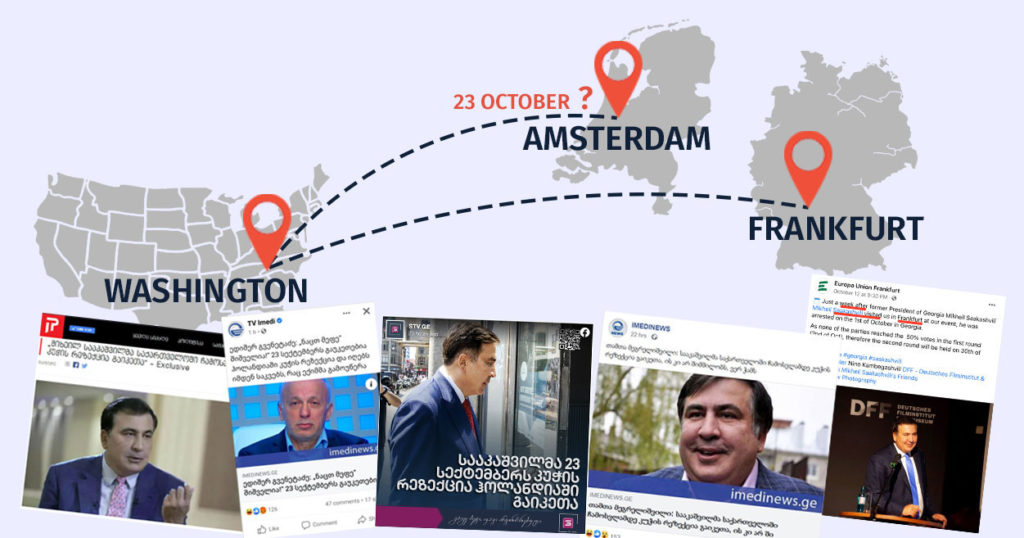 On November 5th, pro-governmental expert Edisher Gvenetadze published a post on his Facebook page claiming that Mikheil Saakashvili underwent gastrectomy in the Netherlands on September 23rd. Hence he is now receiving as much food (porridge) as prescribed by his doctor. Based on Gvenetadze’s post, the same information was also published by “Imedinews.ge,” sharing it on both “TV Imedi” and “Imedinews” Facebook pages.

Imedinews also published a Facebook post with identical content by Tamta Megrelishvili, which is not made public on her Facebook page. According to the information, Saakashvili had a stomach resection on September 23rd in Amsterdam. The post asserted that one is not allowed to eat for some time after the procedure and should even drink water moderately. 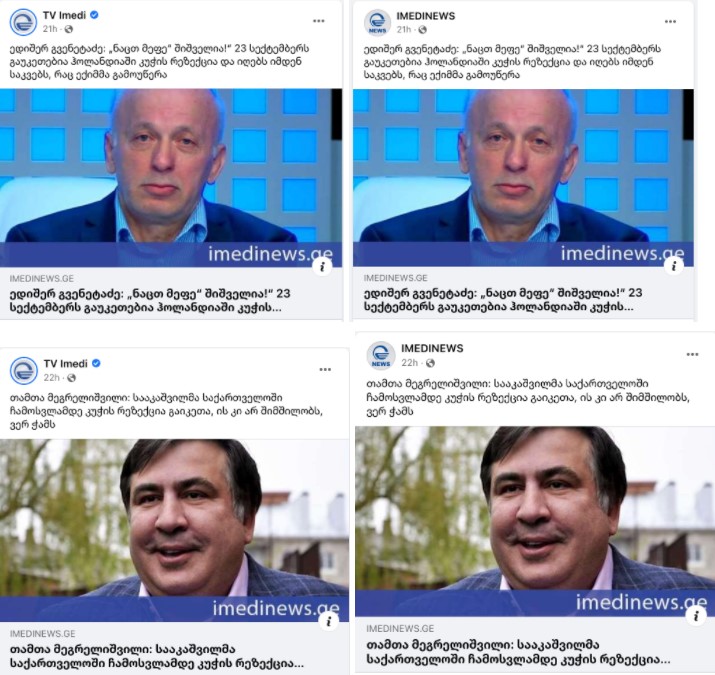 On November 5th, the article with the same title was published on Primetime.ge, labelling the news as exclusive. Nonetheless, Primetime claimed that the information was obtained from a confidential source who was one of the members of the United National Movement. Primetime further claimed that to verify the above-mentioned information, they contacted Mikheil Saakashvili’s mother, Giuli Alasania, who redirected them to Saakashvili’s personal doctor Nikoloz Kipshidze, who did not answer their calls. Based on Primetime, this information was also disseminated by the pro-governmental regional outlet stv.ge.

The claim that Mikheil Saakashvili underwent gastrectomy in the Netherlands on September 23rd is false. On September 23rd, Saakashvili took part in the Europa Union Frankfurt event in Frankfurt, which was broadcast live on Facebook. Considering the time required for gastrectomy and post-procedural rehabilitation, the former president would not be able to undergo the procedure from September 24th to 28th, as it would take him around 40-44 hours to travel by boat from Chernomorsk to Poti port.

Where was Saakashvili on September 23rd?

Several posts dated October 23rd can be found on Mikheil Saakashvili’s Facebook page. One is from Washington, in which he addresses the Georgian youth. The time of publishing the video is September 23rd, 2021, at 8:51 AM.

On September 23rd, Saakashvili’s page shared a live event of the German non-governmental organization Europa  Union Frankfurt, held in Frankfurt, where the third President of Georgia, together with MEPs (Viola von Cramon, Michael Galer), spoke about the upcoming local self-government elections in Georgia. The time of the live broadcast of the video is set at 9:09 PM on September 23rd. The video shows that Saakashvili was physically attending the event in Frankfurt, while in his speech, he noted that he arrived at the event from Washington. After addressing the participants in English, he later spoke in Georgian as well. The Facebook page of the Europa  Union Frankfurt has also published a post, where the organization notes that Mikheil Saakashvili was arrested in Georgia on October 1st, one week after he visited Frankfurt. 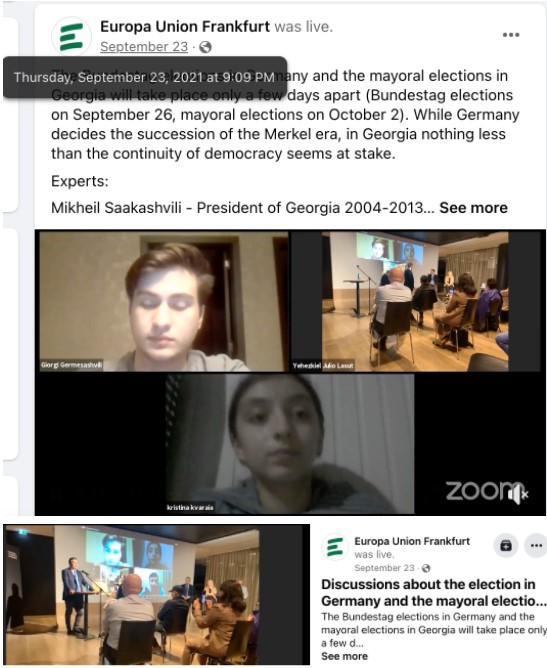 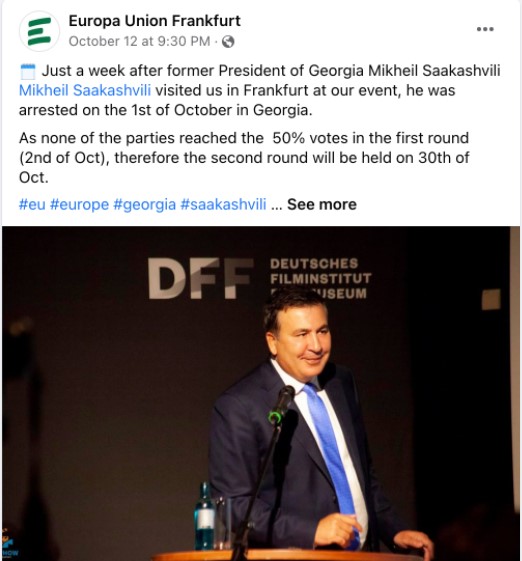 According to open sources, Saakashvili arrived in Frankfurt from Washington, so he could not have a gastrectomy in Amsterdam on September 23rd.

Gastrectomy is a surgical procedure in which about 80% of the stomach is removed (primarily by laparoscopic method). This procedure is advisable when the patient is obese and used mainly with patients willing to lose weight.

After the surgery, the stomach decreases in size and becomes tube-shaped. Limiting the size of the stomach also limits the amount of food that a person can take. In addition, the procedure causes hormonal changes that contribute to the loss of excess weight and alleviating conditions associated with excess weight, such as high blood pressure or heart disease.

According to Mymeditravel, in the case of bariatric surgery in central Amsterdam, it is usually necessary to stay in the hospital for at least one night. In some cases, it may be required to stay longer, about 3 to 5 days. However, it is not advisable to leave Central Amsterdam immediately after discharge from the hospital.

According to the website, it is usually recommended to stay in Amsterdam for a period of 10 to 14 days after surgery for a full recovery and further examination. Sometime after the operation, the surgeon should remove the stitches and evaluate the patient’s general health condition.

Hence, even if Mikheil Saakashvili had undergone surgery in the Netherlands on September 24th, he would have had to stay in the same hospital for at least one night, and his doctor would not have recommended him to travel for the next 10-14 days. In addition, he would need some time in Amsterdam to remove the stitches, which is less realistic given that Saakashvili arrived in Georgia by boat on the evening of September 28th.

Identical surgeries are performed in Georgia, and doctors recommend pre-preparation for surgery, which includes weight loss, as well as discharge from the hospital in 4-5 days.

Not to mention, the claim that eating after bariatric surgery is prohibited is manipulative since, after gastrectomy, patients continue to eat, simply reducing the size and frequency of their meals. For example, if a patient used to eat three large servings a day after a gastrectomy, they may switch to a six servings diet. In the early stages of the diet, an important part is to get a variety of fluids and foods with a consistency of porridge until the stomach can process solid foods; this process can last up to about eight weeks. 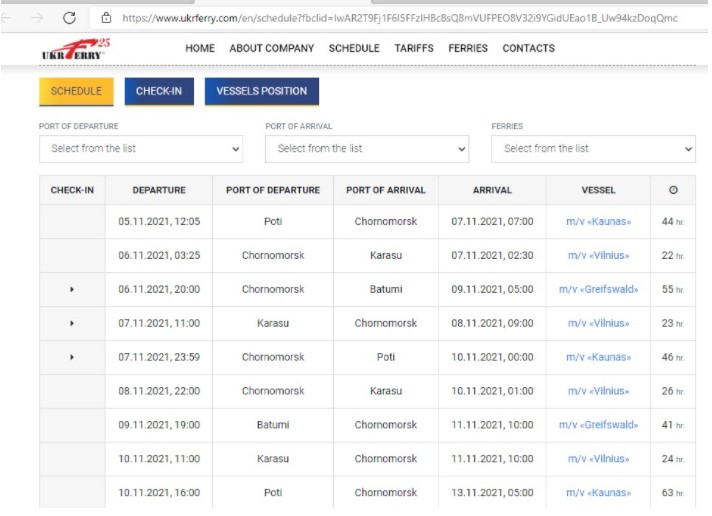 Given that Saakashvili was in Frankfurt, Germany, on September 23rd and had to leave for Georgia by ship at least on September 26th, it is unlikely that he could undergo surgery on September 24th or 25th, as two days is simply not enough for rehabilitation or removal of stitches.

A statement about the alleged surgery was also issued on Saakashvili’s Facebook page, stating that the last time Saakashvili underwent stomach surgery was five years ago.

The information about Saakashvili undergoing a gastrectomy in Amsterdam on September 23rd, prior to his arrival in Georgia was disseminated in a coordinated manner by other pro-governmental media (PosTV, Guardian.ge, Spnews.io.ge, MarshalPress, Media Holding Kvira,Exclusive News) as well. The information was also shared by the pro-Kremlin outlets like NewsFront, Metronome and Alia. In addition, “Alia” also covered the publication of “Myth Detector” on the same topic.

PosTV, Spnews.io.ge and Exclusive News use the information disseminated by PrimeTime as a source. Metronome, Guardian.ge, Pia.ge and Marshalpress, as well as the newspaper “Alia” with a xenophobic and homophobic editorial policy base their content on the information spread by Tamta Megrelishvili. On November 6th, Saakashvili also reported on a gastric bypass surgery on September 23rd, pro-Kremlin media outlet, NewsFront, published similar information without specifying the source.

P.S. After “Myth Detector” marked the information disseminated by Primetime as false on Facebook, the original version of the material was corrected by the outlet.