Did Saakashvili’s mother Compare the Third President to Alexander the Great? 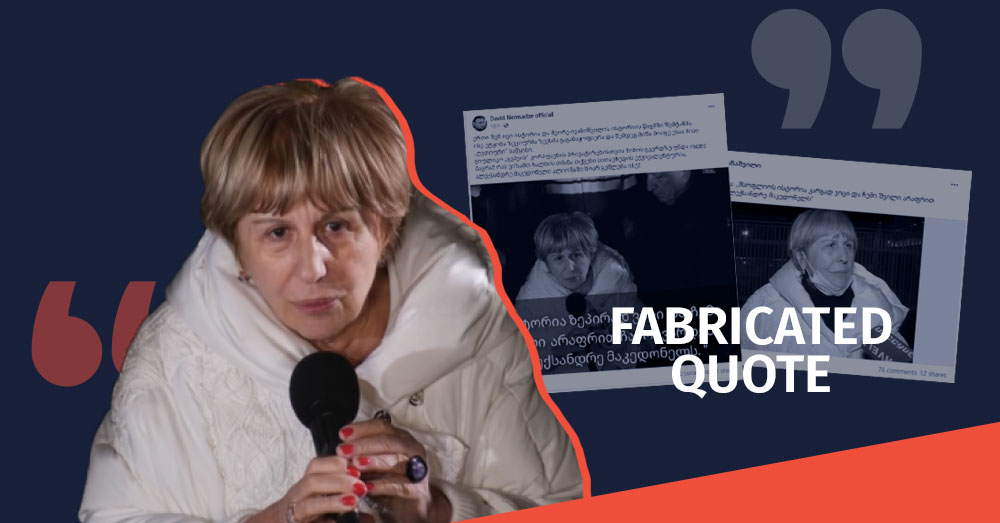 On December 7th, in a public group “პროტესტი! Protest! Протест!” the Facebook user Kakha Mikhanashvili published the photo of Giuli Alasania, the mother of the third president of Georgia, with the following caption: “Giuli Alasania:” I know the world history very well, and my son is on par with Alexander the Great.”

On December 8th, the Facebook page David Nemsadze Official posted a photo and an identical quote of Giuli Alasania.

The quote used in the spread posts is fake. No open-source contains information about Alasania comparing his son to Alexander the Great.

The information that Giuli Alasania compared his son, the third president of Georgia, to Alexander the Great can not be found in any open source.

The photo published by Kakha Mikhanashvili is an excerpt from a video recorded on October 1st, 2021.

The video was posted on the Facebook page of TV Pirveli, in which Giuli Alasania answers journalists’ questions about Mikheil Saakashvili’s arrival in Georgia, noting that it was a surprise for her as well, as she thought she and her son would return to Georgia together on October 2nd. In the 3-minute video, there is not a single part where Giuli Alasania compares his son to Alexander the Great.

As for the second photo, It was cut from a video of Giuli Alasania’s speech during a rally by the United Opposition in Zugdidi on October 9th, 2021.

During the speech, Giuli Alasania spoke about the importance of Mikheil Saakashvili’s hunger strike and the fact that he considered his son a political prisoner. Nonetheless, she never mentioned her knowledge of history and Alexander the Great.

The quotes of Giuli Alasani disseminated without context were fact-checked by “Myth Detector” in the past as well. See our publication: