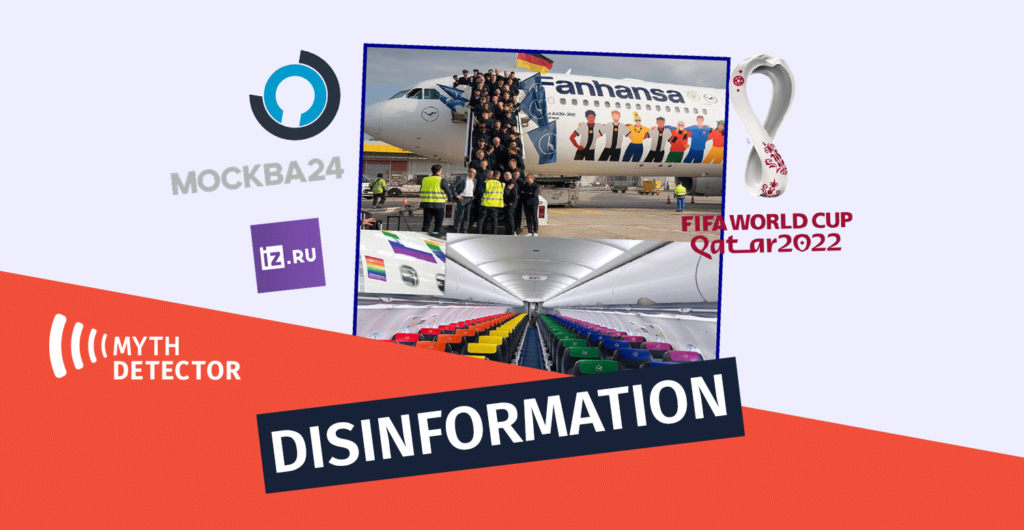 On November 21-22nd, Alt-News – the Facebook page of the pro-Kremlin Alt-Info TV, as well as Georgian- (1,2) and Russian-language (1,2,3,4,5) Facebook accounts reported about the arrival of the German football team to the World Cup in Qatar. According to them, the Qatari authorities did not accept the German plane because it had LGBTQ+ symbols on it. It was claimed that the plane had to fly to Oman, from where the German team flew to Qatar by another plane. The posts were accompanied by a photo of the plane and the German national team.

On November 21-23rd, a similar claim was voiced by Russian media outlets Izvestiya and Moskva 24. 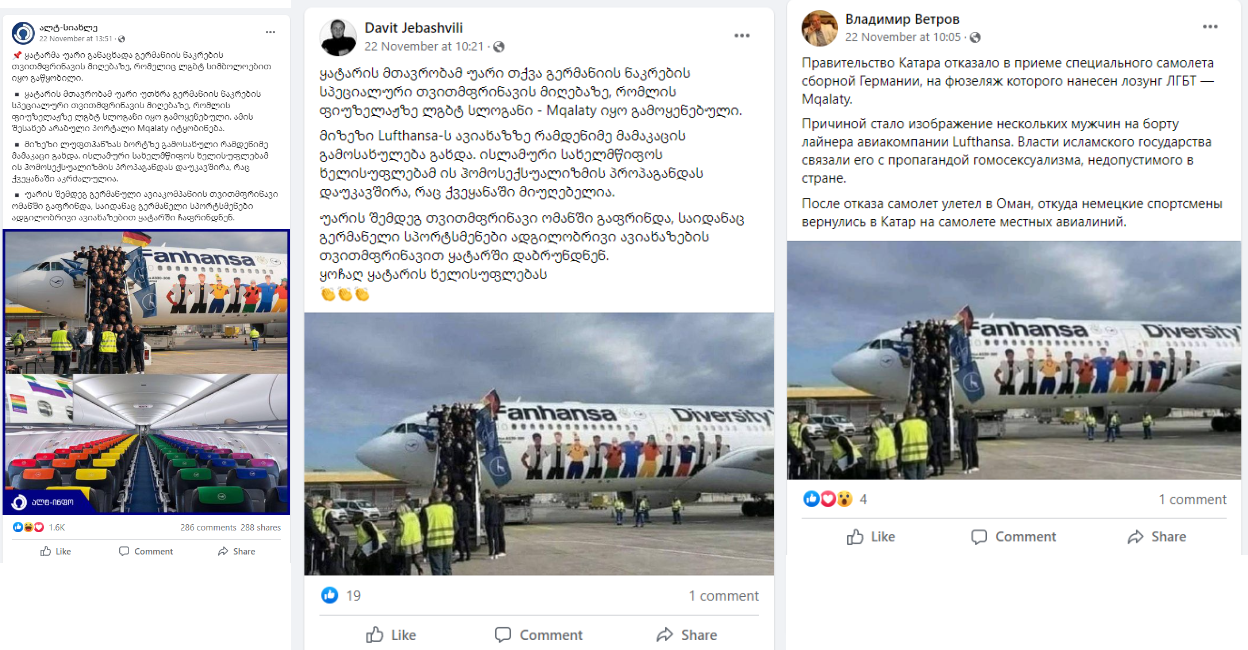 The claim that the Qatari authorities refused to receive the plane of the German national football team is false. The team flew from Germany to Oman on a pre-planned route on November 14th with Lufthansa Airlines, and on November 17th, the team flew to Qatar with Oman Airlines.

The German football team did not arrive in Qatar on a direct flight from Germany. On November 14th, the team flew from Frankfurt to the training base in Muscat, the capital of Oman, where they later played a friendly match against the Oman national team. The photo disseminated on Facebook was taken this very day, before boarding the plane of the German football team.

The Airbus A330-300 that transported the German national team is called Fanhansa. In addition to the words “Diversity Wins”, its fuselage also features people of different gender, race and age forming a single chain. According to the Lufthansa airline, it connects different nations and cultures and serves everyone, regardless of their gender, age, ethnicity, religion, nationality, identity and sexual orientation, carrying the same message that Diversity Wins!

The German Football Association (DFB) released a further explanation as to why the team flew from Oman to Qatar on a different flight. According to the statement, since Lufthansa does not operate regular flights to Doha, the plane would have to return to Germany without passengers if it landed in Doha. Along with the German football team, other passengers also flew to Muscat, after which the plane made a flight from Muscat to Dubai, United Arab Emirates, and returned to Frankfurt.

As for the German national team, it flew to Doha on November 17th with Oman Airlines. Video footage of the event was distributed by a number of sports media outlets (1,2,3).

The viral information as if Qatar refused to accept the plane of the German national team was also fact-checked by France 24, stressing that no such incident took place, and the national team flew to Doha according to the predetermined plan and route.