Did Polish Economy Suffer Due to a “Russophobic” Policy? 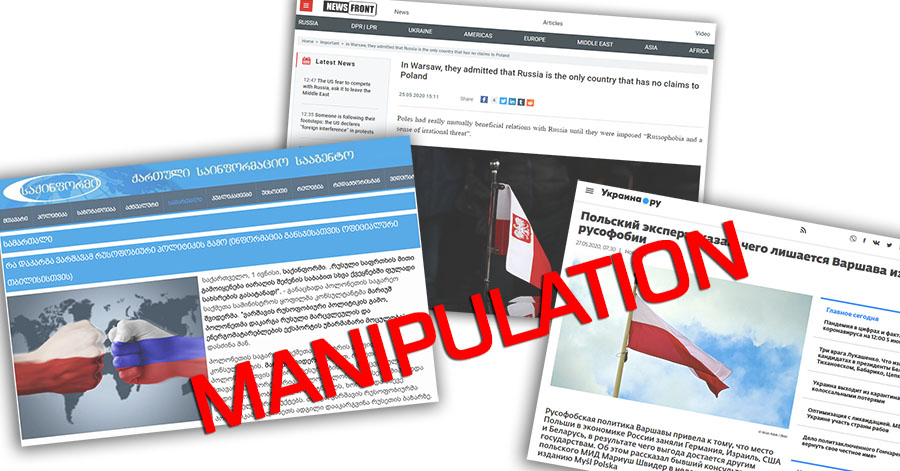 On June 1, a news agency Saqinform published an article titled “What Did Warsaw Lose Due to Its Russophobic Policy (Food for Thought for Georgia)?” The article reviews the results of a “Russophobic“ policy by taking Poland as an example. The article mentions that Russia is the main import source of the vital resources and grains for Poland. Poland, on the other hand, could have exported large amounts of fruits, vegetables, meat, and industrial products to Russia. However, according to the author, due to its Russophobic policy, Poland lost vast amounts of the Russian grains and energy resources, as well as the market for selling its own products. The article cites the former Consultant to the Ministry of Foreign Affairs of Poland – Mariusz Świder as the source.

Articles with identical content were disseminated on May 25-27 by Newsfront and a webpage Ukraina.ru. 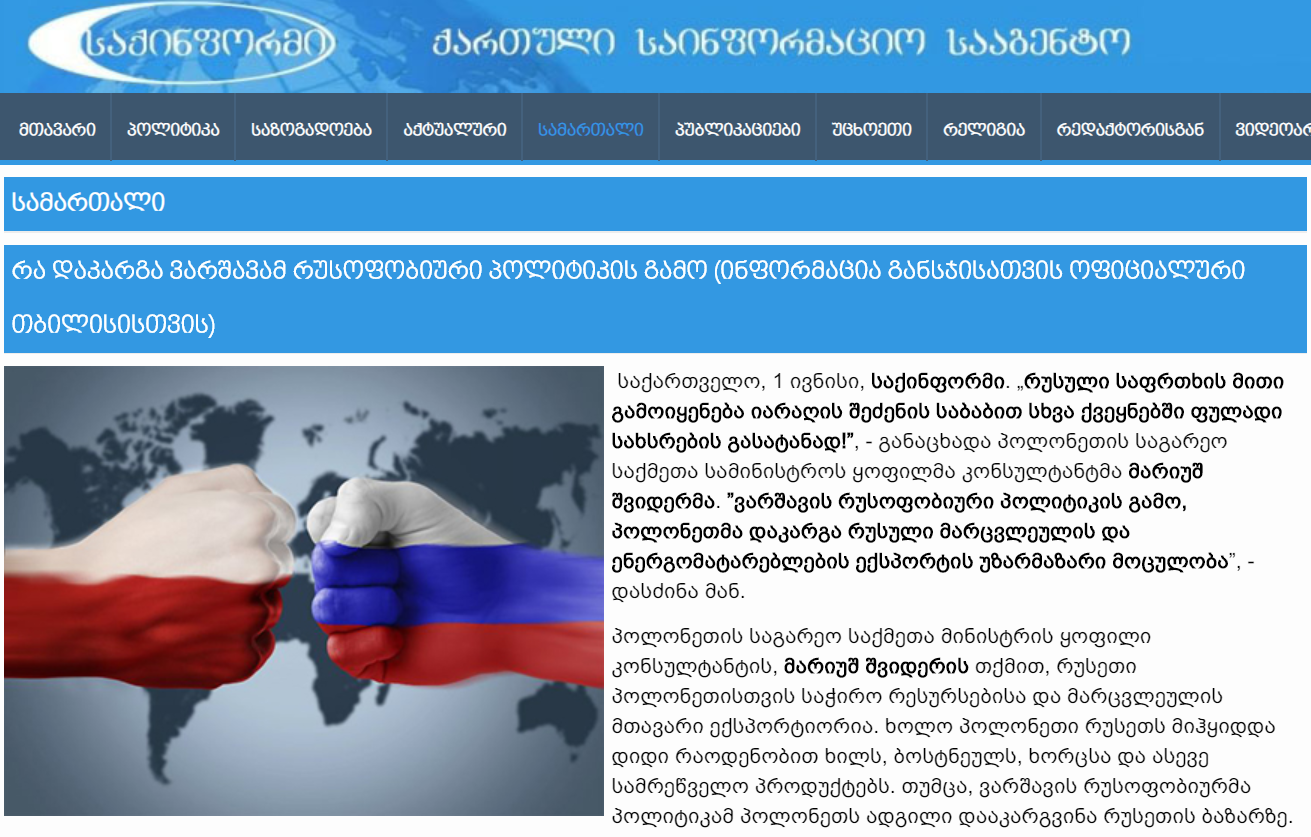 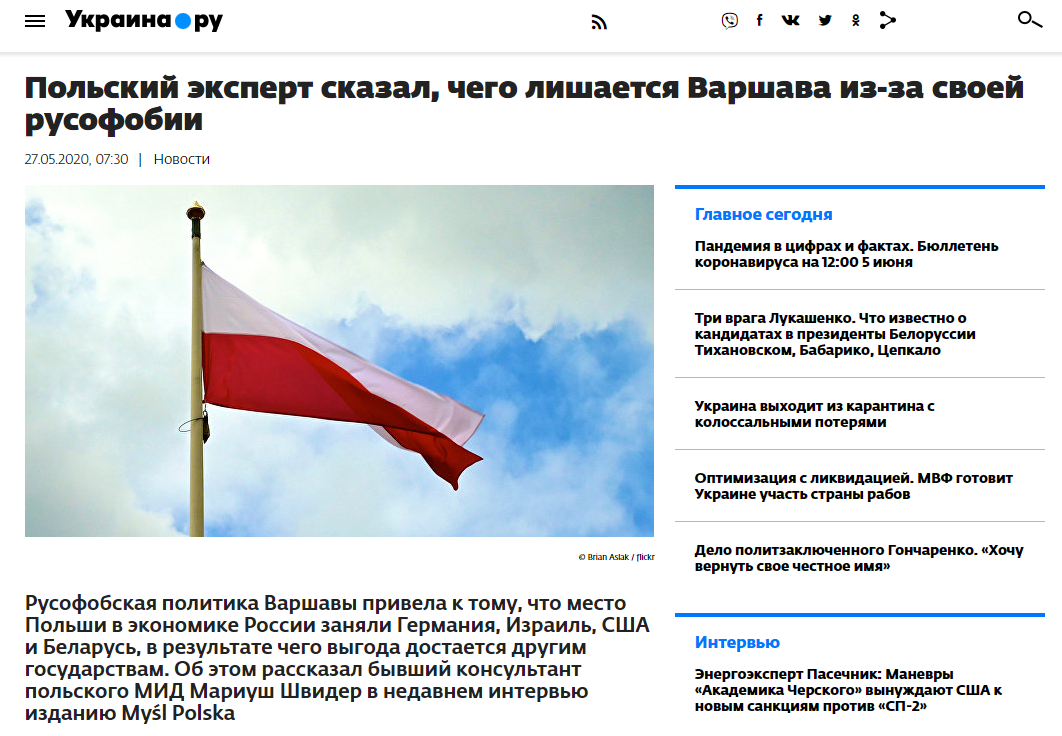 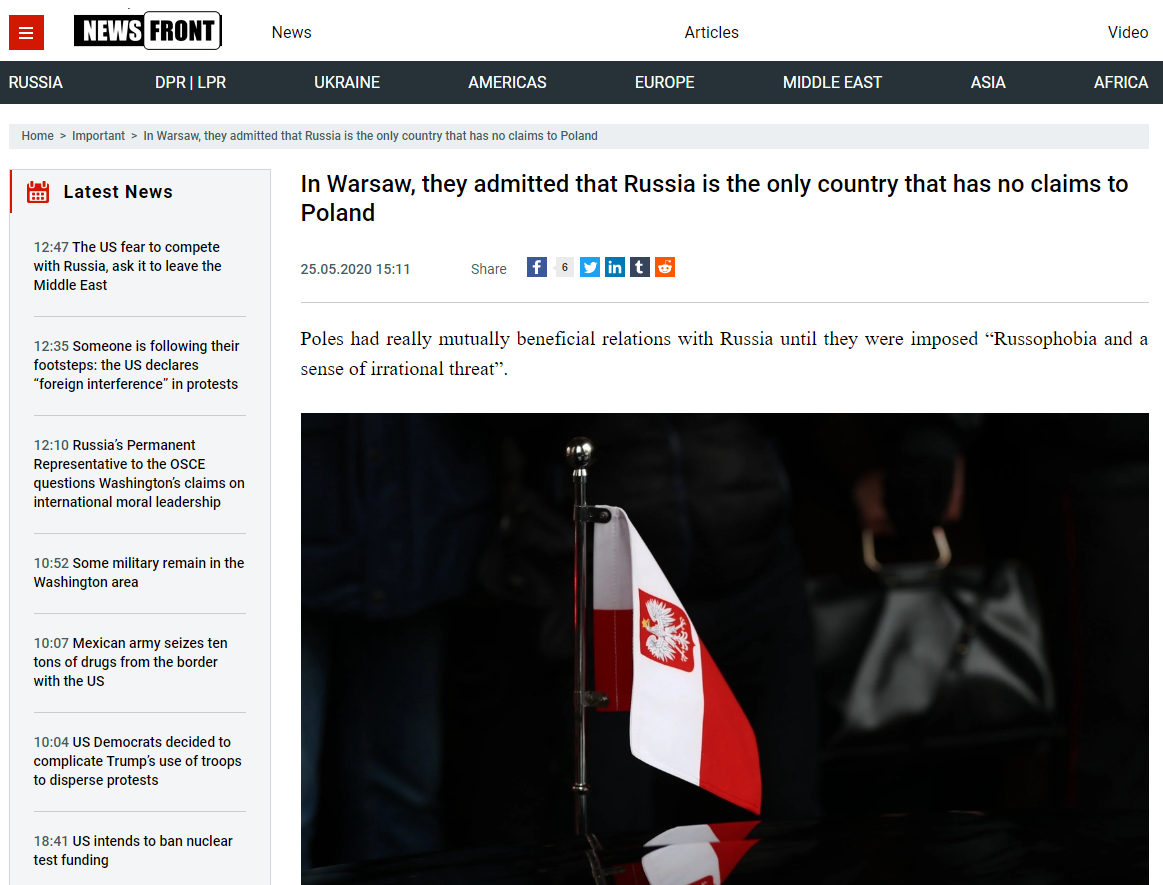 The statements about Russia being Poland’s main import source of grains and the loss of grains and energy resources due to a Russophobic policy, as well as the opportunity to export its own products (fruits, vegetables, meat, and industrial products) to Russia are manipulative. Poland has not suffered from economic consequences due to a decreased volume of the import-export with Russia. Poland diversified its market and significantly increased its foreign trade despite the decrease in the exports to Russia. In addition, Russia is not the main source of grain import for Poland. Lastly, Mariusz Świder – the consultant, mentioned in the article, is a pro-Russian expert.

What did Poland Lose due to the Deteriorated Relations with Russia?

The Polish-Russian relationship soured after the annexation of Crimea by Russia. Poland supported imposing sanctions against Russia and the Eastern Europe’s close relations with the Euro-Atlantic space.

In July 2014, the Government of Russia itself banned the import of fruits and vegetables from Poland, officially due to sanitary reasons. However, the Minister of Agriculture of Poland stated that this ban was a response to the sanctions imposed by the European Union and the United States on Russia due to the intervention in Ukraine. 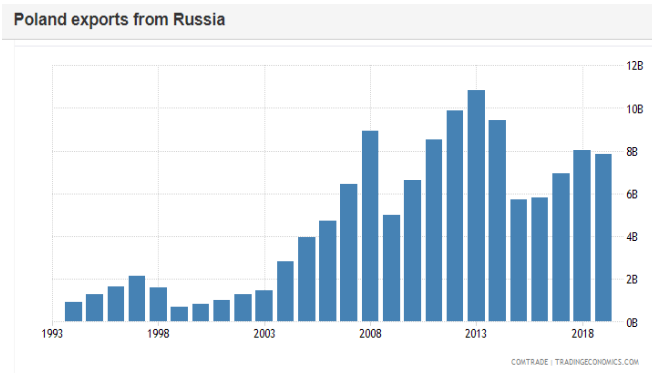 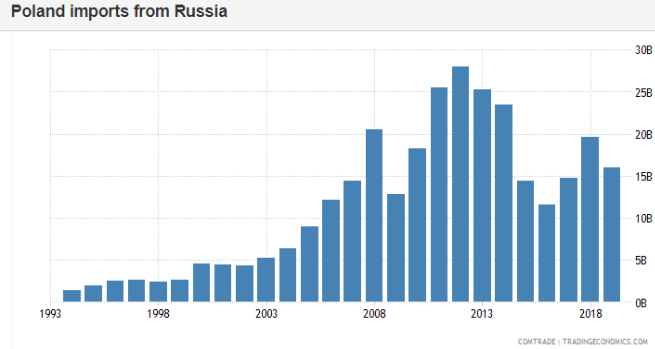 Despite the decrease in the trade turnover with Russia, Poland’s gross foreign trade increased 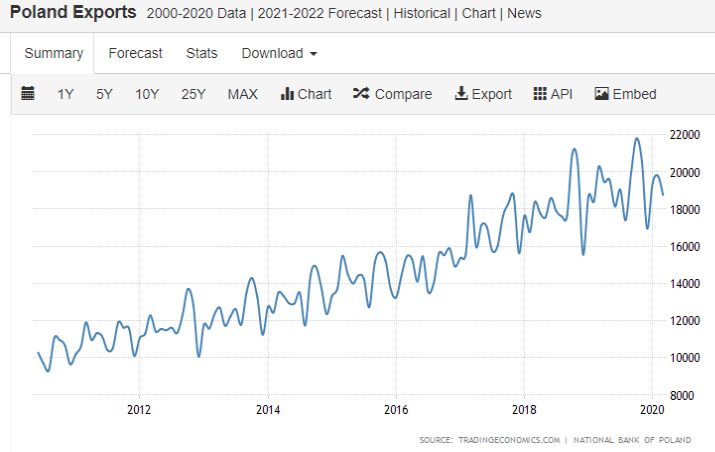 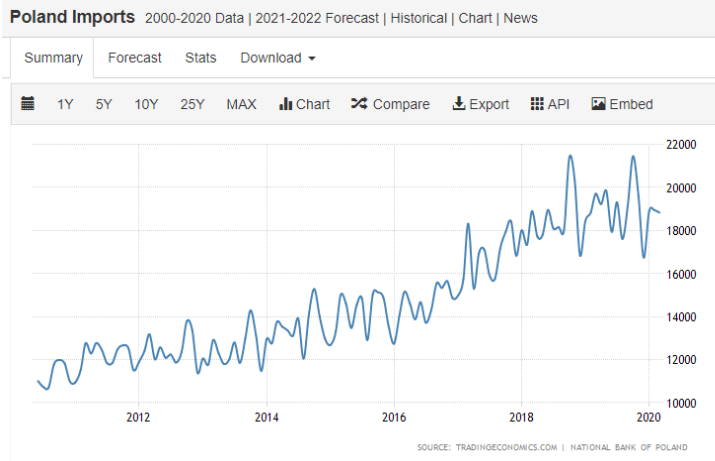 As for the export of fruits, vegetables, and meat from Poland to Russia, it should be noted that Poland itself consumes approximately 70% of the food products, with the remaining 30% being mainly exported to Germany, the Czech Republic, and the United Kingdom.

In 2014, after Russia’s embargo, the EU allocated EUR 5 million to find a new export destination for apples, produced in Poland. As a result of the market diversification, Poland has not suffered any losses following the decrease in trade with Russia. Moreover, while Poland’s annual apple export did not exceed 3,000 tons in 2014, in 2014-15 this figure grew to 20,000 tons.

In 2013, the largest vegetable export destinations for Poland were Germany and Russia, but in 2015, Russia was replaced by the Czech Republic, the United Kingdom, France, and other countries.

EU member countries replaced Russia in terms of industrial product exports, as well. While in 2013, Russia was on the fourth position among Poland’s export destinations of industrial products, in 2015 it moved to the seventh place. Export volumes grew with Germany, France, the Czech Republic, Italy, and the Netherlands.

Russia is not the main source of grain import for Poland. The main sources of import of buckwheat, millet, and other grains for Poland are: Lithuania, Ukraine, Germany, Latvia, Peru, and Russia.

The value of gross imports from Russia to Poland in 2019 was USD 16.01 billion, with the fossil fuels and oils accounting for the largest share of the imports, followed by other types of products and metal.

As for the energy resources, the import of natural gas and oil from Russia significantly shrank in 2014, but increased from Germany, Kazakhstan, and the Central Asia. Thanks to the Gdańsk terminal, Poland is a part of the global oil market and has a technical capacity to obtain oil from other sources as well.

Moreover, since 2014, Poland’s energy policy became oriented on the natural gas, instead of oil. In 2015, a liquified natural gas terminal was activated in Świnoujście, Poland, with a storage capacity of 5 billion cubic meters. In 2016, the first contract with Qatargas was signed. In 2017, American gas was transported to the Polish terminal for the first time. Therefore, Poland is successively reaching the goal of creating a diversified energy supply system so that it would not depend on an unstable energy partner like Russia.

According to LinkedIn, Mariusz Świder, who is mentioned in the article, was indeed working as a Consultant in the Ministry of Foreign Affairs of Poland in 1992-93.

He is also the author of a book “How to Invade Russia”, in which, according to the description, Świder tells a story of ties between Russia and Poland and claims that a lot of Russian public figures have Russian roots.

In addition, Mariusz Świder actively shares pro-Russian articles and disinformation on social media, with 5G conspiracies being one of the examples. There are video recordings related to Ukraine on YouTube, in which Mariusz Świder, together with his other colleagues, is named as a strong supporter of Russia. 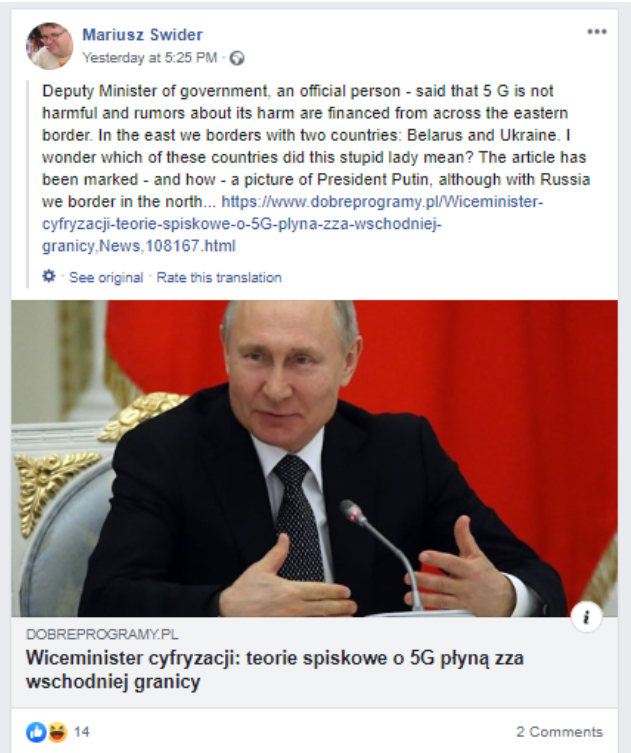