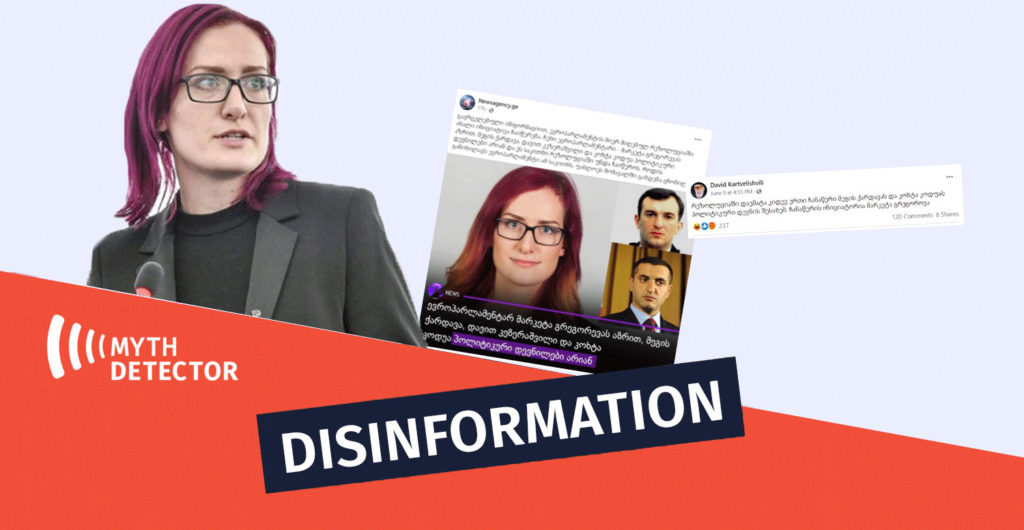 On June 9th, 2022, the Facebook page ‘newsagency.ge’ published a post stating that MEP Marketa Gregorova considers Megis Kardava, Davit Kezerashvili and Kokhta Kodua as political refugees and believes that this issue should have been reflected in the EU resolution.

Similar information was disseminated by the pro-governmental expert Davit Kartvelishvili, who wrote on Facebook that Marketa Gregorova was the initiator to include a section about Megis Kardava and Kokhta Kodua in the resolution. 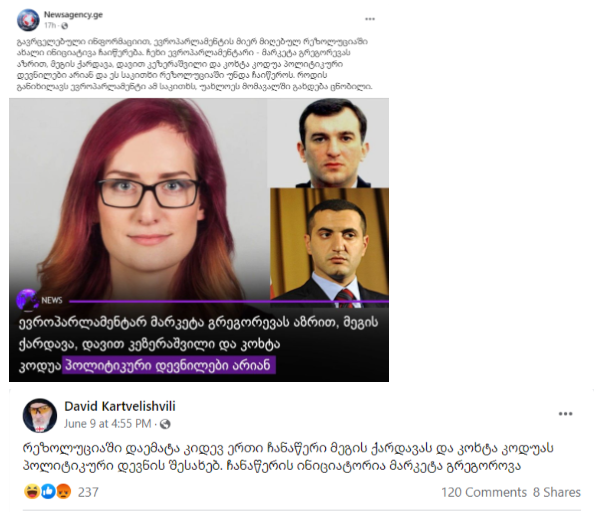 The claim that Marketa Gregorova wants to include Megis Kardava, Davit Kezerashvili and Kokhta Kodua in the European Parliament resolution as political refugees is false. In a comment to “Myth Detector,” Gregorova denied making such a statement.

On June 9th, 2022, the European Parliament adopted a resolution on violations of media freedom and the safety of journalists in Georgia. The resolution criticizes the state of media freedom in the country and cites a number of issues that point to violations. In addition, the European Parliament called on the Council and its Democratic partners to consider imposing personal sanctions on oligarch Bidzina Ivanishvili.

Notably, during the debate on the adoption of the above-mentioned resolution on June 9th, Marketa Gregorova made a statement at the European Parliament session and called on the Georgian government to adhere to the standards of democracy. The MEP also noted that many cases had been filed against media workers and owners. Davit Kezerashvili, Megis Kardava and Kokhta Kodua were not mentioned in the statement of Gregorova. A similar statement cannot be found on Gregorova’s official social media channels either.

“Myth Detector” contacted Marketa Gregorova, who, in the form of written communication, stated that she has never made a statement of such kind. Not to mention, the MEP said she had never heard these names before.

As for the resolution itself, Davit Kezerashvili is mentioned in the context of his media ownership. We read in the document that lawsuits have been filed against the owners of critical media outlets or their family members, specifically Davit Kezerashvili, the owner of TV Formula, and Vato Tsereteli, the founder of the independent TV channel “TV Pirveli.”