Did Members of NATO Provide Ukraine Blood Infected with HIV and Hepatitis? 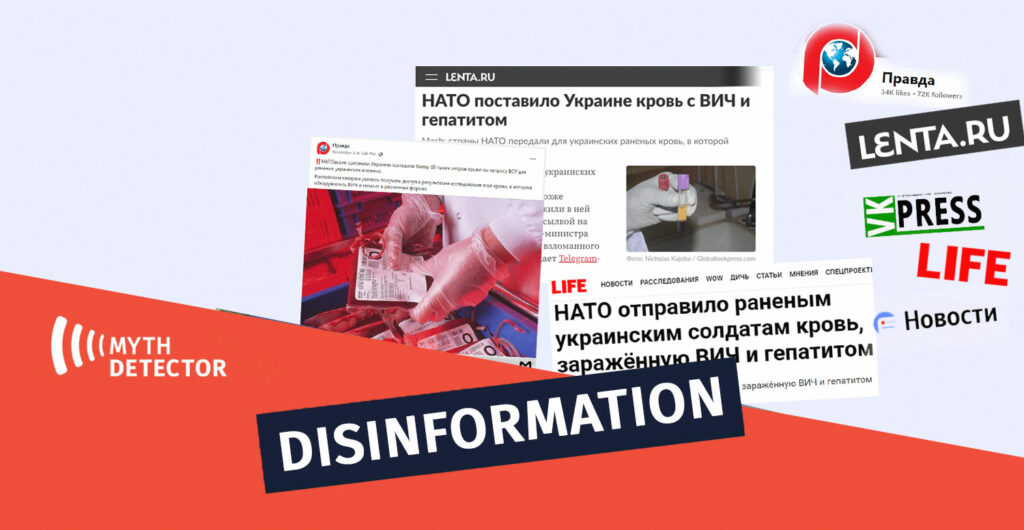 On November 3rd, 2022, Russian propaganda media outlets Правда, Lenta.ru , vkpress.ru, dzen.ru and  life.ru published information about the blood supplied to Ukraine by NATO countries, stating that the allies from the North Atlantic Treaty Alliance provided 68,000 litres of blood to Kyiv for the wounded soldiers at the request of the Ukrainian Armed Forces, however, when testing the blood, Ukrainian doctors found HIV and hepatitis. 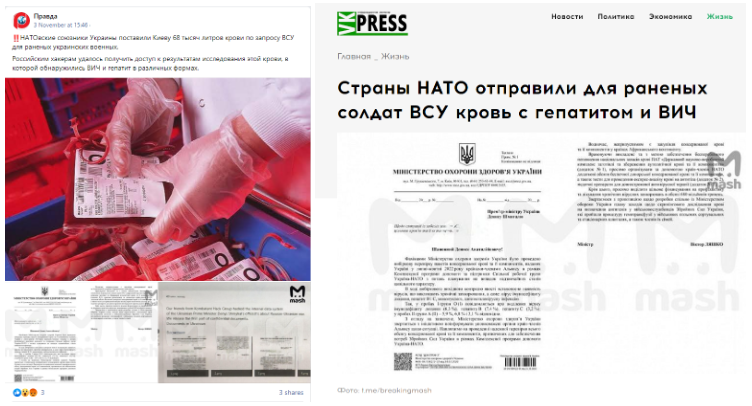 The claim about discovering various infections in the blood supplied by NATO member states to Ukraine is false. In fact, Ukraine has never turned to foreign partners for blood or its components, as Ukraine has established a national blood service that provides patients with laboratory-tested, high-quality blood.

Based on the Telegram channel Mash,  Russian media disseminated the information that after the “unsuccessful attack” attempts in the direction of Kherson in October, the Ukrainian Ministry of Health was in dire need of blood for the soldiers wounded in Odesa, Mykolaiv, Dnipropetrovsk, Kharkiv and Zaporizhia regions, which is why Kyiv asked NATO for 62,000 litres of blood. During the selective testing of the delivered blood, Ukrainian doctors found the causative agent of HIV, hepatitis B and C and other infections, which was apparently confirmed by the official letter of the Minister of Health Viktor Liashko and Prime Minister Denys Shmyhal that was obtained by Russian hackers.

Notably, during the entirety of the war, Ukraine never asked its foreign partners for donor blood or its components. The National Blood Service operates in Ukraine, which works according to European standards and provides patients with high-quality blood and its components. The letter distributed by the Ministry of Health of Ukraine on November 7th  states that since the first day of the war, citizens of Ukraine have been systematically making planned donations, which ensures a stable supply of blood. In addition, the initiative “Your blood can fight, become a donor” continues, the goal of which is to encourage blood donation and create a permanent register of potential donors.

Several options for blood donation are available in Ukraine. In almost every city, there are blood centres or other medical facilities where people can donate blood. If the blood supply in the region decreases or there is an acute shortage of a specific blood group, medical institutions announce this on their official websites or social networks.

The articles distributed by Russian news agencies claim that Ukrainian doctors selectively checked the blood supplied by NATO countries; however, in Ukraine, any blood or its components are checked not randomly but without exception; therefore, only safe blood and its components are used for patients. In addition, before undergoing the procedure of donating blood and its components in Ukraine, all donors undergo a mandatory free examination to guarantee the safety of both the donor and the recipient. Donors are allowed to donate only if they do not have health concerns.