Did Kennedy Ask for Help to Fight the Illuminati Ten Days before his Death? 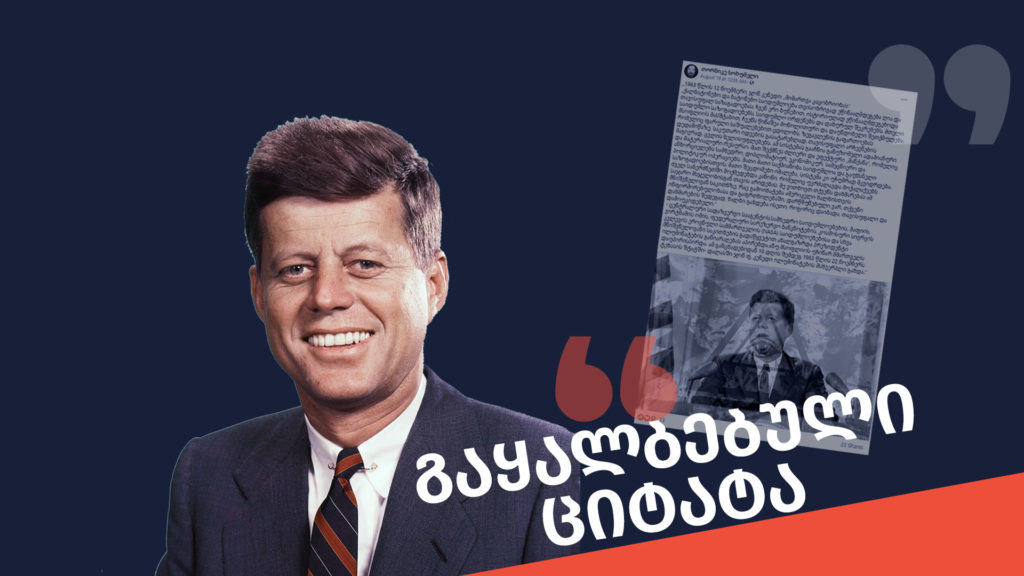 “Ladies and gentlemen, the very word secrecy is inherently against open and free society. Our nation, by nature, has historically opposed secret societies, secret orders, and closed gatherings. All over the world we are facing a monolithic and ruthless conspiracy that seeks  to expand its influence on the earth to carry out its own ideas by covert means. Instead of free elections, it changes governments. This system has immeasurable human and material resources. They created a powerful and efficient “machine” that carries out military, diplomatic, economic, scientific and political operations. Their activities are secret and closed to the public. Their mistakes are hidden, and the system is being established with stealth. Ancient Greece had a law forbidding citizens from avoiding public debate. I ask for your help on this important issue of raising awareness and warning the American people. I am confident that with your help, people will become what they were born to be, free and independent.“

The post claimed that Kennedy tried to neutralise the Illuminati, and for this very reason, on November 22nd, 1963, ten days after the speech, he was murdered by the secret organisation. The post is accompanied by the picture of Kennedy and the Illuminati symbol. 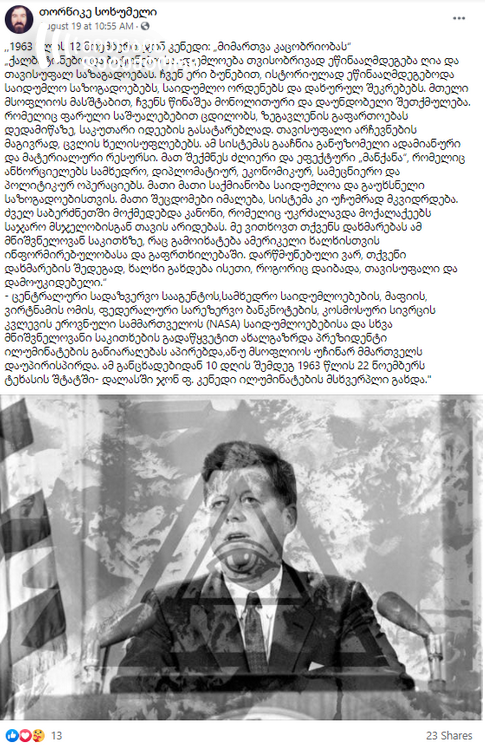 The quote published by Tornike Sokhumeli is fabricated, and it does not belong to Kennedy. No open-source contains an identical statement made by the 35th president of the United States. The speech made on November 12th, 1963, can not be found in the archives of the Kennedy library. Parts of the quote are being taken from Kennedy’s speech from April 27th, 1961; nonetheless, Kennedy referred to the threat coming from the Soviet Union and not from the Illuminati. The claim that the Illuminati murdered Kennedy is a conspiracy theory.

The alleged quote of Kennedy cannot be found in any open source. All of Kennedy’s speeches and addresses can be found on the webpage of the JFK Presidential Library and Museum. The website shows no records of Kennedy’s November 12th, 1963 speech.

The webpage of the University of California, Santa Barbara that archives all the addresses, letters and decrees issued by the U.S. presidents contains only one letter dated November 12th, 1963; nonetheless, the letter concerns railways and does not mention any secret societies.

The quotes about the “efficient machine” and secret societies used in the post are taken from Kennedy’s April 27th, 1961 address, where Kennedy talked about the issues of press freedom and preservation of national secrets with the American Newspapers Publishers Association.

The accurate quotes demonstrate that Kennedy was not referring to the Illuminati but the threat coming from the USSR during the Cold War. The same address has been spread on social media without context or with a deceiving description in the past as well. For more, see the article of “Myth Detector:”

The disinformation about Kennedy revealing conspiracies days before his death has been disseminated previously as well. “Myth Detector” has an article covering the whole story. See:

The claim that Kennedy was murdered by the Illuminati is a conspiracy theory since there is no official proof. Conspiracies regarding Kennedy’s death have been circulating among the public since the 1960s.