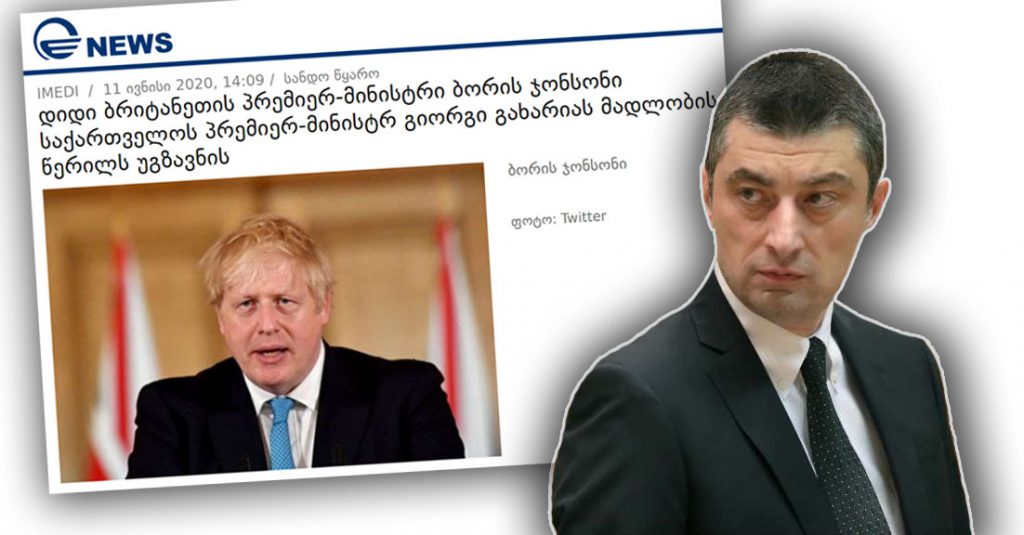 On June 23, Facebook user Shore Shanidze published a post on her page highlighting the issue of mandatory vaccination. Shanidze claims that Georgian Prime Minister Giorgi Gakharia has signed a commitment, along with sixty other countries, on mandatory COVID-19 vaccination. Shanidze refers to Imedinews as its source of information. However, the news story published by Imedinews actually covers a letter sent by UK Prime Minister Boris Johnson to his Georgian counterpart, Giorgi Gakharia, where Johnson thanks Gakharia for his personal participation in the Global Vaccine Summit.

The identical post was also published in Facebook group “ვერ ვსუნთქავთ! არა ექსპერიმენტულ ვაქცინას!”(We cannot breathe! No to experimental vaccine!). The post has 205 shares and among others, it was shared by Facebook page “საქართველო უპირველეს ყოვლისა” (Georgia first of all). 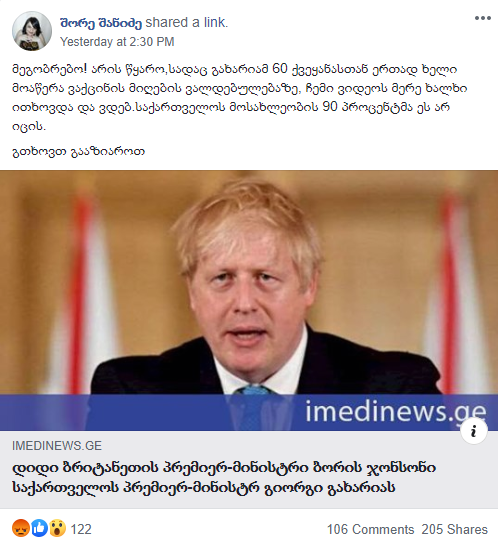 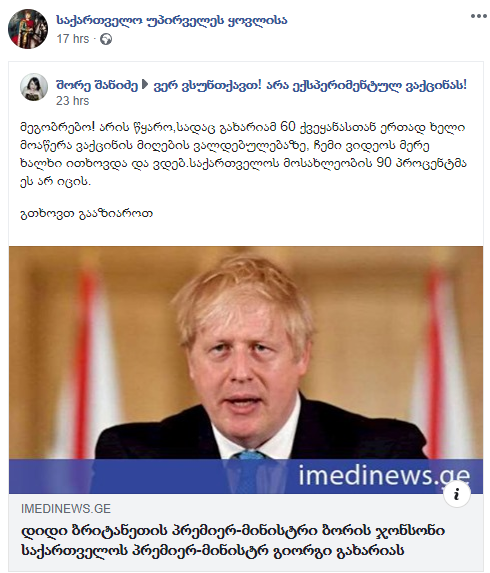 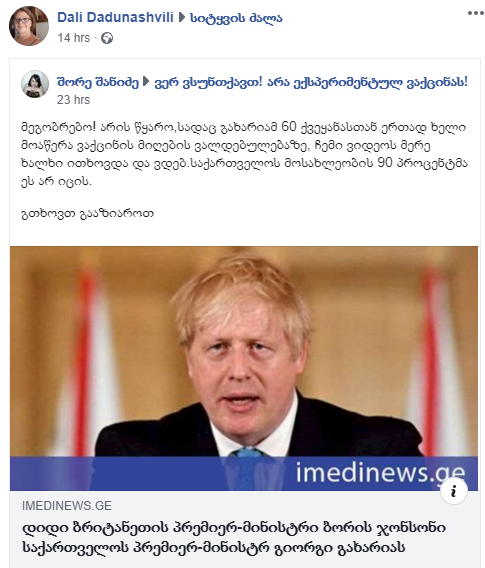 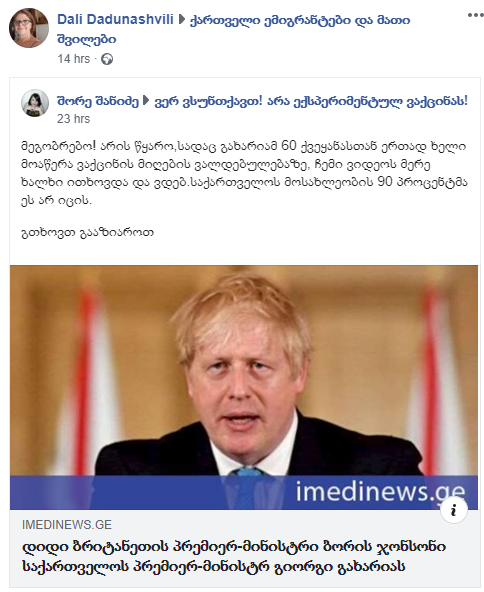 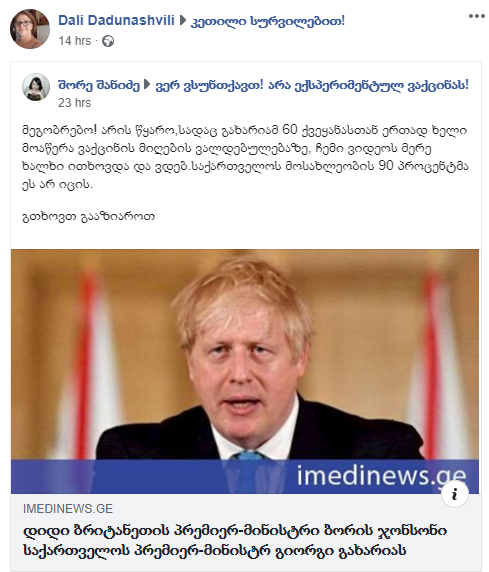 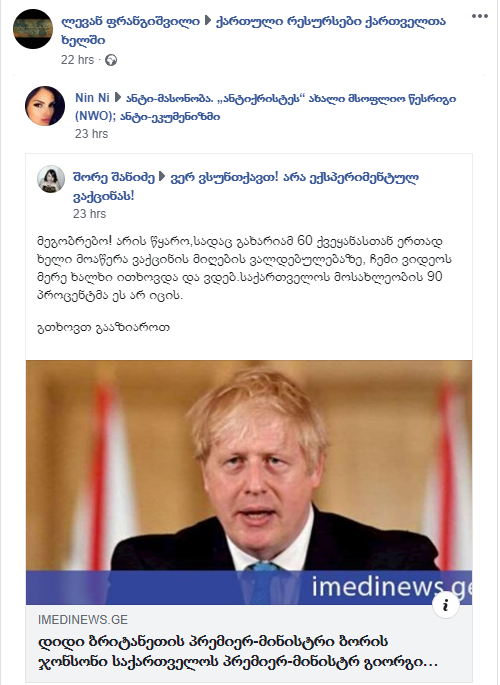 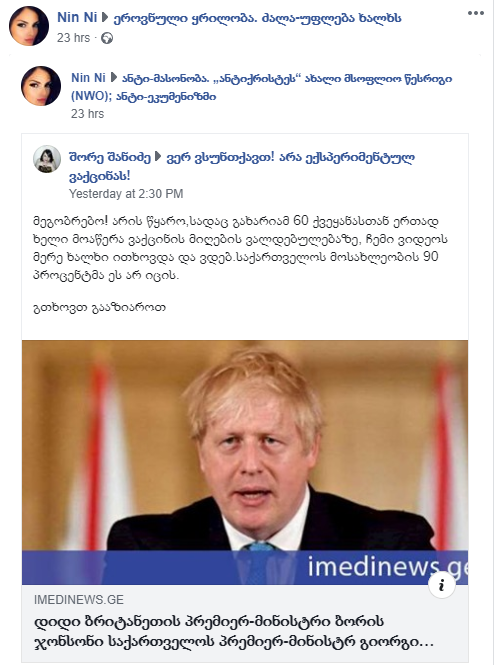 The assertion as if Georgia, along with other countries, has signed a commitment on mandatory COVID-19 vaccination is disinformation. The Global Vaccine Summit, in which Georgia participated on June 4, has nothing to do with mandatory COVID-19 vaccination. The Imedinews article referred to by the Facebook user as the source of information actually covers a letter of gratitude sent by PM Johnson to Gakharia for the latter’s personal participation in the Summit.

The post published by Facebook user Shore Shanidze about mandatory vaccination is accompanied by the article released by Imedinews about the letter sent by UK Prime Minister Boris Johnson to Georgian PM Gakharia. Shanidze refers to the article as the source and claims that PM Gakharia and sixty more countries signed a commitment on mandatory vaccination. In fact, in his letter, PM Johnson thanks his Georgian counterpart for the participation in the Global Vaccine Summit on June 4, mentioning the word “commitment” in an absolutely different context.  “We must harness the momentum of the Summit to sustain this high level of global commitment to immunization”, PM Johnson writes in the letter. So, in this particular case, “global commitment” does not imply mandatory COVID-19 vaccination, because:

The Global Vaccine Summit 2020, hosted by UK Prime Minister Boris Johnson, was held on June 4. Representatives from 52 countries, including Georgia, participated in the Summit. Shore Shanidze artificially links the Summit to the issue of mandatory vaccination, especially as the participants did not even raise the issue. The Summit focused not only on coronavirus vaccines, but also on allocating funds to GAVI, the Vaccine Alliance, for the next five years to immunize 300 million more children in lower-income countries against diseases like measles, polio and diphtheria by the end of 2025. The UK remains the Vaccine Alliance’s largest donor, pledging the equivalent of £330 million per year over the next five years. Other top donors include the Bill and Melinda Gates Foundation, Norway, Germany and the United States. Eight countries made their first ever pledge to GAVI, including Bhutan, Burkina Faso, Cameroon, Finland, Greece, New Zealand, Portugal and Uganda.

It is groundless to claim that Georgia and the UK have committed to undergo mandatory vaccination, especially as no vaccine has been created so far and there is no information about when and how many vaccines Georgia will receive. There are no regulations and practice regarding mandatory COVID-19 vaccination in any country; it is also worth noting that according to UK law, immunization against measles, rubella and other diseases is voluntary.

The governments of Canada and Germany have stated that fake news is spread regarding mandatory vaccination, though no such regulation exists so far. As for Georgia, it is unknown what the government will decide in the future. Government officials have yet to make official statements on the issue. Bidzina Kulumbegov, medical doctor at Center of Allergy and Immunology, clarifies that COVID-19 vaccination will be voluntary.