Did Erdogan and Gakharia Agree on Repatriation of 100,000 Deported Meskhetians? 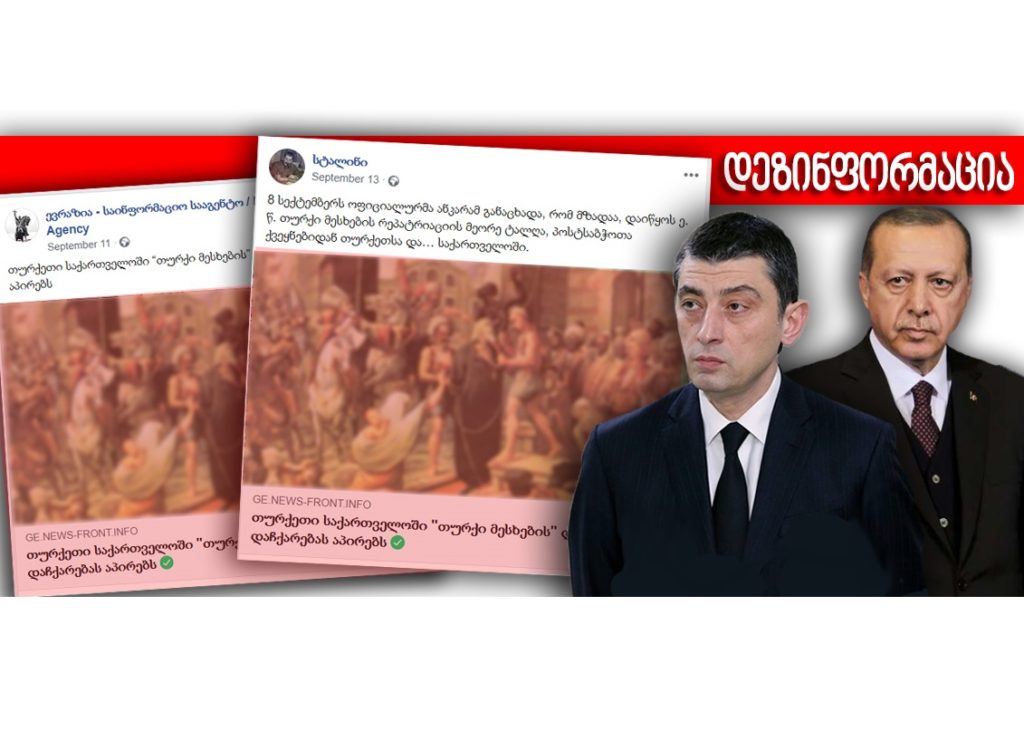 On September 11, 2020, News Front Georgia, an online outlet, published an article headlined “Turkey plans to speed up the repatriation of Meskhetian Turks to Georgia.” Shota Apkhaidze, editor of the online media outlet, claims that Turkish President Recep Tayyip Erdogan offered Georgian Prime Minister Giorgi Gakharia to cover all expenses for the resettlement of 100,000 Muslim Meskhetians (in the article “Meskhetian Turks”) to Samtskhe-Javakheti. Apkhaidze also notes that the Turkish government announced on September 8 that it was ready to begin the second wave of Muslim Meskhetians’ repatriation to both Turkey and Georgia. He also claims that Turkey has already repatriated about 150,000 Muslim Meskhetians to the country and plans to repatriate 100,000 more people to the territory bordering with Georgia. The author of the article emphasizes that Stalin made a correct decision when deporting Muslim Meskhetians, because they posed a threat to Georgia as well. In the end, Apkhaidze portrays the resettlement of 100,000 Muslim Meskhetians as a threat of fomenting an ethnic conflict and losing territories, and incites Turkophobic sentiments.

The article is accompanied by a painting depicting a conflict between Christians and Muslims, which, according to various Greek sources, illustrates the hanging of Ecumenical Patriarch of Constantinople, Gregory V by the Ottoman Empire in 1821. Adding this illustration to the article about deported Meskhetians creates a context of religious confrontation and is manipulative.

The information spread by News Front Georgia as if Turkey has urged Georgia to repatriate 100,000 deported Meskhetians lacks evidence. The initiative on repatriation of Meskhetian Turks belongs to Georgia, not Turkey. Further, not 100,000, but 5,841 deported Meskhetians from various countries, including Turkey, submitted applications to acquire the status of a repatriate, whereas the deadline for accepting applications expired in 2010.

1. The Turkish government’s statement about beginning “the second wave” of repatriation of Muslim Meskhetians cannot be searched through open sources. The information about the agreement reached between Erdogan and Gakharia lacks evidence.

News Front’s article claims that on September 8, the Turkish government made a statement about beginning “the second wave” of repatriation of Muslim Meskhetians to Georgia and Turkey. However, no such statement can be searched through open sources in either English or Turkish languages.

Most recently, the Turkish government made a statement about the deported Meskhetians, called by Turkey as “Ahiska Turks,” on September 16. The Turkish Foreign Ministry reportedthat Foreign Minister Mevlüt Çavuşoğlu held a meeting with Ziyatdin Kassanov, President of the World Ahiska Turks Union, on 16 September on the sideline of the Asia Anew Panel of World Knowledge Forum. Mevlüt Çavuşoğlu underlined that “we would always stand by the Ahiska Turks everywhere.”

Noteworthy that official Ankara has voluntarily agreed on the resettlement of thousands of Muslim Meskhetians to Turkey. According to the data for 2019, Turkey has granted citizenship to over 40,000 Muslim Meskhetians and continues to accept them until now.

2. Initiative on repatriation of Muslim Meskhetians to Georgia belongs to Georgia, not Turkey, as Georgia undertook this commitment upon joining the Council of Europe

To obtain additional information about the process of repatriation, Myth Detector reached out to Irakli Kokaia, who served as the head of the Repatriation and Refugees Department at the Ministry of Internally Displaced Persons  from the Occupied Territories, Accommodation and Refugees and was personally involved in the process. Kokaia said that the process of repatriation of Muslim Meskhetians to Georgia had been underway long before Georgia undertook this commitment upon joining the CoE. Several families had settled down in Georgia’s Nasakirali and Ianeti villages since 1984 and in the 1990s, some of them returned on their own initiative.

3.  5,841 Muslim Meskhetians submitted applications to acquire the status of a repatriate based on Georgia’s commitments; the deadline for accepting applications expired in 2010. 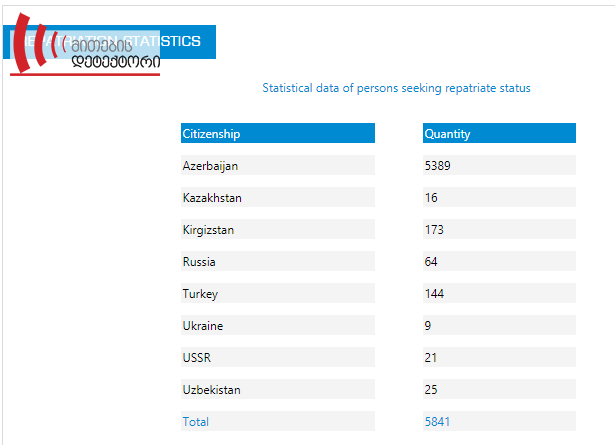 The Soviet Union launched its fight against Meskhetians as far back as 1923, when ethnic Georgian Meskhetians were registered as “Azerbaijanis,” their Georgian surnames were changed to Azerbaijani, while Meskheti was turned into a cultural autonomy of Azerbaijan. In July 1944, Joseph Stalin instructed Lavrentiy Beria to deport the population from Georgian regions, among them “86,000” Turks from Akhaltsikhe, Adigeni, Aspindza, Bogdanovka districts and Adjara region.

The Soviet government deported some 150,000 Muslim Meskhetians from Georgia to Central Asia, saying they were “unreliable people” spying in favor of Turkey. About 15,000 people died during resettlement.

According to the data for 2018, there are some 600,000 Meskhetian Turks in the world, most of them in Kazakhstan, Kyrgyzstan, Russia, Turkey, Uzbekistan, and the United States. Muslim Meskhetians live under difficult conditions in Krasnodar, southern Russia, where they frequently become victims of discrimination. Most Meskhetians living in Krasnodar have no official status that prevents them from protecting their own rights.

According to the Tolerance Center under the Public Defender of Georgia, the first 40 repatriates arrived in Georgia in late 1950s. In 1969, 250 families resettled from Azerbaijan to Achigvara (Gali district of Abkhazia). The second stage of repatriation began in 1982. Since then, 1,270 Meskhetians have resettled to Georgia. In 1991-2005, only 113 Meskhetians resettled to Georgia. According to the data for 2005, 755 repatriates were registered in Georgia with 163 of them temporarily living outside Georgia. There are several areas in Georgia compactly resided by Meskhetians. These areas are: Ianeti, Nasakirali, Akhaltsikhe (western Georgia) and Tbilisi.

Ethnic origin of the deported Meskhetians is a matter of dispute. Some scientists claim that it was an ethnically Georgian tribe which suffered Turkification during the expansion of the Ottoman Empire. Their opinion is based on the 1870 census conducted in Akhaltsikhe, where 20,855 people were considered Sunni Georgians. It is worth noting that the Meskhetians living in Samtskhe-Javakheti called themselves “yerli musliman,” meaninglocal Muslim. A part of scientists note that the Meskhetians were ethnic Turks and they fell under Georgian influence. In their opinion, Muslim Meskhetians of that period actually did not differ from the Turks of Eastern Anatolia. In the Turkish historical-political discourse, these people were called the Ahiska (Akhaltsikhe) Turks. Nowadays, one part of Meskhetians considers themselves Georgians and another part – Turks. Others have no clear-cut ethnic identity.

See details about disinformation spread regarding the deported Meskhetians below:

Spread of disinformation on social media 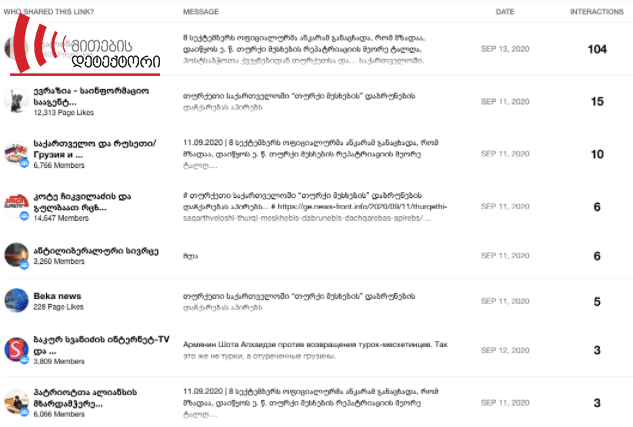