Did Anthony Fauci Become the Sexiest Man in America, and what do We Know about the AIDS Epidemic? 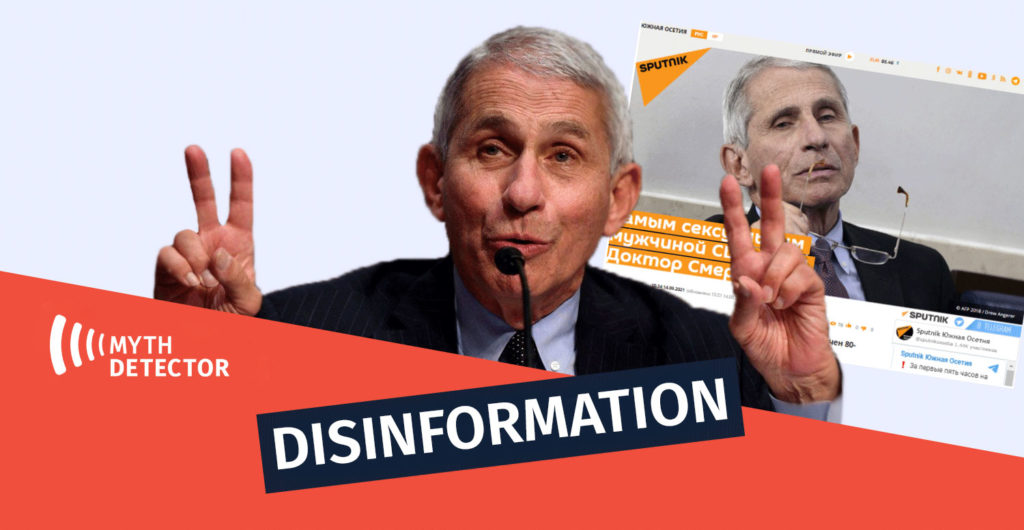 On September 14th, 2021, Kremlin propagandist media outlet “Sputnik-Ossetia” published an article about Anthony Fauci, the director of American Centers for Disease Control and Prevention, with the following title: “Doctor Death” named the sexiest man in America.” The article entails several claims directed against the head epidemiologist of the U.S.: 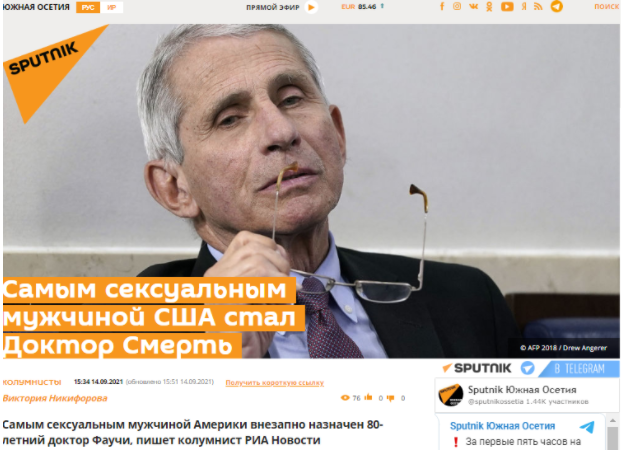 The article of Sputnik-Ossetia about Anthony Fauci contains several misleading claims. 1. The statement that Anthony Fauci was named the sexiest man in America is false. 2. The claim that Fauci forbade doctors to use effective medications to treat those infected during both the AIDS epidemic and the coronavirus pandemic is disinformation. 3. The information that Anthony Fauci is discrediting the Russian vaccine “Sputnik V” is also false. 4. Finally, the claim that Fauci is a member of the so-called “deep state” is a conspiracy theory.

Disinformation #1: Anthony Fauci was named the sexiest man in the U.S.

In April 2020, a petition appeared on the Internet, collecting signatures to declare Anthony Fauci, Director of the National Institute of Allergy and Infectious Diseases, the “Sexiest Man of 2020”. The petition gathered more than 28,000 signatures, but instead of Fauci, the American magazine “PEOPLE” gave the title to the American actor Michael B. Jordan. 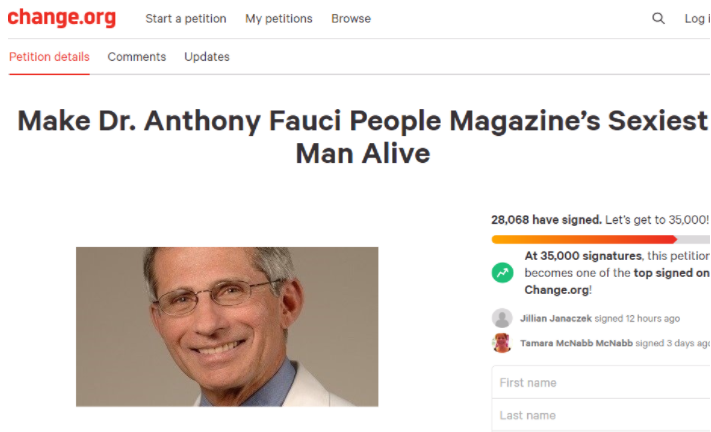 Disinformation #2: During the AIDS epidemic in the United States in the 1980s, Anthony Fauci banned doctors from using effective methods and medications to treat HIV infection, resulting in the death of numerous people.

The epidemic of acquired immunodeficiency syndrome (AIDS) emerged in 1981 in the United States, and the disease initially spread at an exceptionally rapid rate among homosexual men. Anthony Fauci became the director of the American National Institute of Allergy and Infectious Diseases during the epidemic in 1984, when very little was known to science about the pathogen that causes AIDS. It was only in 1982 that the CDC was able to determine that the source of the virus was the blood of those infected, and the virus was isolated and tested in 1983. Consequently, at the initial stage of the epidemic, HIV was spreading uncontrollably, and there were no proven effective treatment methods;

In the absence of FDA-approved drugs and therapeutic methods, alternative unauthorized methods of treatment became widespread in the early stages of the AIDS epidemic. Nonetheless, Fauci had never banned any effective method or medication of the AIDS virus. In fact, his efforts have reduced bureaucratic barriers and restrictions on clinical trials of anti-HIV drugs to enable more people to be involved in clinical trials to make them more representative. In addition, Anthony Fauci acted as a mediator between federal bureaucrats and street demonstrators demanding speedy treatment of AIDS so that the recommendations of advocates for the interests of people living with HIV could be taken into account in state policy.

The National Institutes of Health (NIH) developed the first FDA-approved drug for the treatment of HIV symptoms, AZT (zidovudine), under the direction of Fauci, which was authorized in 1987. In 1996, a modernized method of HIV treatment therapy was created, which entailed a combination of AZT and other medications. The newly-developed therapy resulted in a significant decrease in HIV-related deaths.

Disinformation regarding Fauci’s management of the AIDS pandemic was fact-checked by “Myth Detector” in the past as well. For more details, see our article:

The article by Sputnik-Ossetia does not specify the names of the alternative effective coronavirus medications banned by Anthony Fauci. The FDA currently recommends several therapies to treat severely infected and hospitalized patients with COVID-19, including ‘Remdesivir.’ There is no evidence that there are other effective medications for coronavirus that are prohibited for use by Fauci. One of the most popular yet ineffective and unproven methods of COVID-19 treatment – discarded by Fauci himself – was the anti-malarial drug hydroxychloroquine. At the beginning of the pandemic, U.S. President Donald Trump and some doctors actively asserted that hydroxychloroquine could cure coronavirus, although as clinical studies have shown, the drug has no effect on the dynamics of the disease. For more information about hydroxychloroquine, see Myth Detector articles:

As for Fauci’s “discrediting claims about the Russian vaccine,” when Russia approved Sputnik V on August 11th, 2020, after only two months of small-scale clinical trials on humans, Anthony Fauci issued the following statement in an interview about the hasty approval of the vaccine:

“I hope that the Russians have actually definitively proven that the vaccine is safe and effective. “I seriously doubt that they’ve done that.”

By the time Russia approved Sputnik V, the Western vaccines, currently authorized by the FDA, were still in the third phase of clinical trials. It is noteworthy that the results of the third phase of the study of “Sputnik V,” according to which the vaccine against coronavirus is 91% effective, were published by the ‘Gamalei Institute’ in February 2021, 6 months after the start of the vaccination process. According to Fauci, the published data demonstrated that the vaccine “looked pretty good and effective. Fauci did not make any other statement regarding the Russian vaccine ever since.

Conspiracy: Anthony Fauci has close ties to the commercial pharmaceutical business (the so-called “Big Pharma”) and the “deep state,” which seeks to prolong the pandemic and crisis.

The conspiracy theories about the “deep state” and the “pharmaceutical mafia” are prevalent in the far-right American society, according to which the processes in America are run by the left-wing, satanic elites and large corporations. In fact, there is no evidence that Anthony Fauci or other decision-makers are in a covert deal with the “shadow” elite to create crises and foster organized crime in America. The conspiracy theories gained special popularity after the appearance of an anonymous user “Q” on the 4chan platform, who claimed that Donald Trump was the Messiah to defeat the “deep state.”

For more conspiracies regarding the ‘Deep State’ and ‘Q,’ see Myth Detector articles: