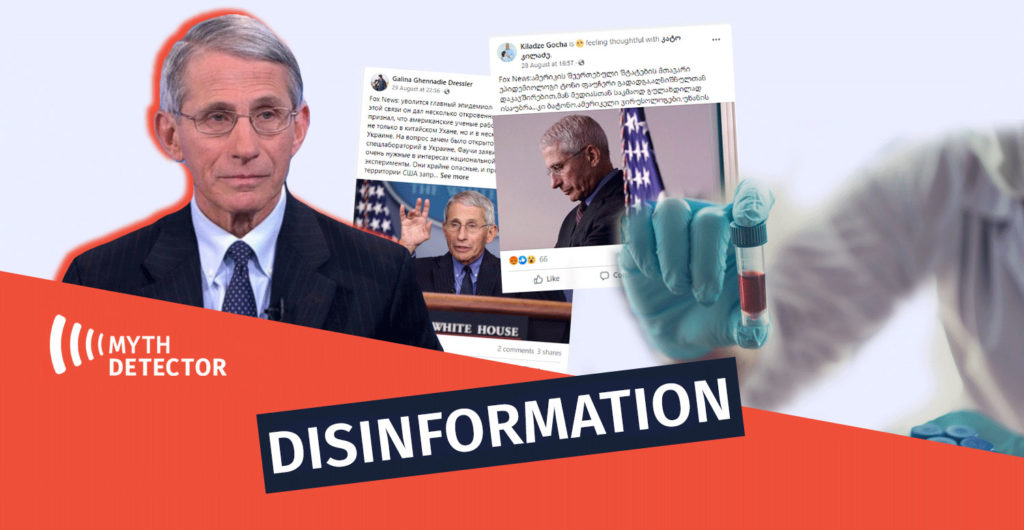 Since August 28th, Georgian and Russian-language Facebook accounts (1,2,3,4,5,6,7,8,9,10)  have been disseminating information about the interview of Anthony Fauci, the medical adviser to the US president, claiming that he admitted that experiments prohibited in the United States were carried out in bio laboratories in Ukraine and China (including tests on the coronavirus), and that the Chinese side only partially knew about it, while the Ukrainian side did not know about it at all.

A portion of the Facebook accounts (1,2,3,4) have attached a screenshot of the Fox News article, creating the impression that Fauci’s words stem from the article.

Claims that Fauci admitted conducting prohibited experiments in bio laboratories in China and Ukraine are false. The August 27th article by James Comer on Fox News does not contain the alleged ‘confessions’ of Fauci. While the claims that Fauci is hiding the true scenario of the origin of the pandemic or that he has anything to do with the creation of the virus have no factual basis.

The article published by Fox News on August 27th, authored by James Comer, a member of the Republican Party of the United States, raises suspicions about Anthony Fauci’s involvement in the cover-up of the true cause of the spread of the coronavirus, although the article does not contain any “confessions” about conducting forbidden experiments in China and Ukraine.

The main evidence used to accuse Fauci of hiding the true causes of the pandemic is an email received from immunologist and microbiologist Kristian Andersen on January 31st, 2020, in which the latter writes that a very small part of the coronavirus genome has rather strange characteristics and may have been artificially compiled.

However, in the same email, Andersen denoted the need for additional analysis, which may change his opinion. Andersen indeed changed his mind later, on March 17th, 2020, when he and several other scientists published an article, according to which the coronavirus may have undergone natural selection in the body of the host animal and then passed to humans or after being transferred from animals to humans, it underwent natural selection in the human body. The authors also emphasized that the scenarios that involve laboratory intervention in the process of the origin and spread of the virus are unlikely.

As for the anchor of Fox News, Tucker Carlson, he has repeatedly accused Fauci of creating the coronavirus. In the August 22 program, Carlson voiced accusations against Fauci that certain types of experiments that are prohibited in the US have been carried out in other US-controlled laboratories, specifically in China and Ukraine.

According to Carlson, the Gain-of-function research of the coronavirus did not meet the criteria set by the National Institute of Health (NIH), so they were carried out in different bio laboratories in Ukraine and China. 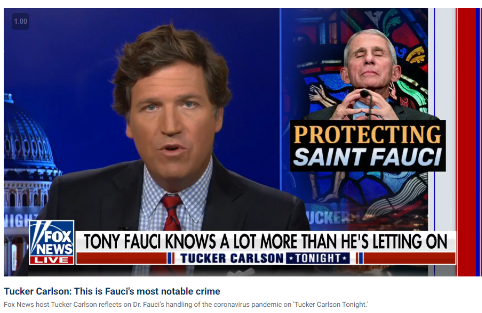 In fact, there is no agreement among scientists on exactly what types of research are included in the group of “Gain-of-function” studies. Hence, according to some definitions, a number of studies conducted in the United States, such as, for example, a study published in “University of North Carolina” in 2015, are united in the “Gain-of-function” group.

In the program, Carlson mentions Ukraine once again when he questions the need for bio laboratories in Ukraine. The presenter points out that Ukraine is not an ideal place for pharmaceutical research, and no one asks questions about what really happens in these laboratories, because of the fear of being accused of working for Putin.

Bio laboratories in Ukraine became the centre of public attention following Russia’s unprovoked intervention in Ukraine. Disinformation related to the issue has been verified by “Myth Detector” in the past as well. See our articles: