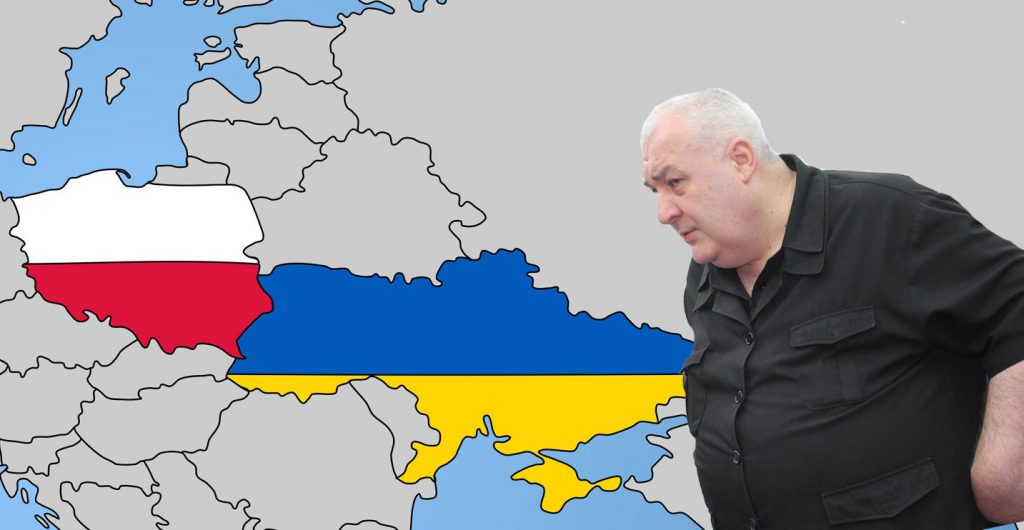 Davit Tarkhan-Mouravi, one of the leaders of the opposition Alliance of Patriots party, said in the interview with Obieqtivi TV on March 29 that Poland allegedly demands Ukraine to return its territories. He also noted that the West does not help Ukraine that leads to splitting Ukraine’s territories. In this respect, Tarkhan-Mouravi draws parallels with Georgia, noting that like Ukraine, nobody will help Georgia either.

Davit Tarkhan-Mouravi’s allegations represent disinformation. Poland does not demand Ukraine to return its territories. This issue is on the agenda of ultra-nationalist and pro-Kremlin groups and it is not discussed at an official level. Sowing anti-Ukrainian sentiments in Poland through inciting historical traumas is part of Kremlin’s strategy.

1. Ultra-nationalist and pro-Kremlin groups raise the issue of territories in Poland

The issue of returning Kresy (Eastern Borderlands) from Ukraine is not part of Poland’s political agenda. Not a single government body talks about it openly. This issue is manipulated by ultra-nationalist and pro-Kremlin groups in Poland, whose goal is to fuel up tensions between Poland and Ukraine through historical traumas and to promote anti-Ukrainian sentiments in Poland.

The issue of Ukraine’s territories was raised by Rękas Konrad, the head of the Polish non-governmental organization Restitution of Borderlands, after Ukraine signed the Association Agreement with the European Union. Rękas Konrad simultaneously serves as the Vice President of pro-Kremlin party Zmiana in Poland. Konrad said on October 19, 2015 that he would file a lawsuit in Ukrainian courts demanding the restitution of property belonging to the Polish people before the World War II. The organization claims that settlement of territorial disputes between Poland and Ukraine is envisaged by the Association Agreement with the European Union. It should be noted that the Association Agreement does not regulate similar issues, while Ukrainian court cannot deal with the case of restitution due to absence of relevant legislation.

Shortly after Konrad’s remarks, a new wave of protests demanding the return of Ukrainian territories emerged in Russian media and Polish ultra-nationalist websites dubbed by German  Deutsche Welle as a new “horror story” by Russian propaganda. The Kremlin uses the issue of territories not only for inciting anti-Ukrainian sentiments in Poland, but also for spreading anti-EU messages in Ukraine. According to Deutsche Welle, Russian media messages represent an attack against the Association Agreement, and simultaneously, they sow fears against “80 thousand Poles,” the property restitution by whom will lead to Ukraine’s economic collapse.

Last year, Political Capital, a Hungarian policy research, analysis and consulting institute, released a research about the activities of pro-Russian ultra-nationalist populist parties, extremist organizations and paramilitary groups in Central-Eastern Europe. According to the research, history is one of Kremlin’s key instruments to sow anti-Ukrainian sentiments in the media. The Kremlin uses tabloid media and ultra-nationalist politicians and activists for this purpose. The 1943 Volyn tragedy, when Ukrainian rebels massacred the Poles living on the territory of Ukraine, serves as one of the strongholds of these groups.

Anti-Ukrainian and, in case of Poland, Czech Republic, Slovakia and Hungary, nationalist protests were organized by Belarusian pro-Russian activist, Alexander Usovsky, who was financially supported by Russian oligarch Konstantin Malofeev. One of the main actors of anti-Ukrainian protests in Poland is the political party Zmiana and some organizations affiliated to it. Zmiana’s leader Mateusz Piskorski was a supporter of pro-Russian separatists and participated in observation missions during illegal elections in the Crimea and Eastern Ukraine. In 2012-2014 he was financed by the Kremlin. Later he was accused of spying in favor of Russia and arrested.

Falsification of history, inciting historical traumas and Soviet nostalgia are the methods that the Kremlin uses as one of its major propaganda weapons. These methods are used not only against Poland and Ukraine, but against all those countries, where it finds enough ground for inciting historical traumas and sowing mistrust and tensions between nations.

For example, the report Kremlin Influence Index showed that like in Poland, Russia also encourages anti-Ukrainian nationalist movements in Hungary. Several Hungarian organizations, including Sixty Four Counties Youth Movement, demand autonomy for the Eastern Carpathian region. This territory was part of the Kingdom of Hungary before the World War I.

The Kremlin uses the same strategy in Georgia. Georgia’s strategic partner, Turkey is the main target for inciting historical traumas. The following anti-Turkish messages are voiced in Georgia: