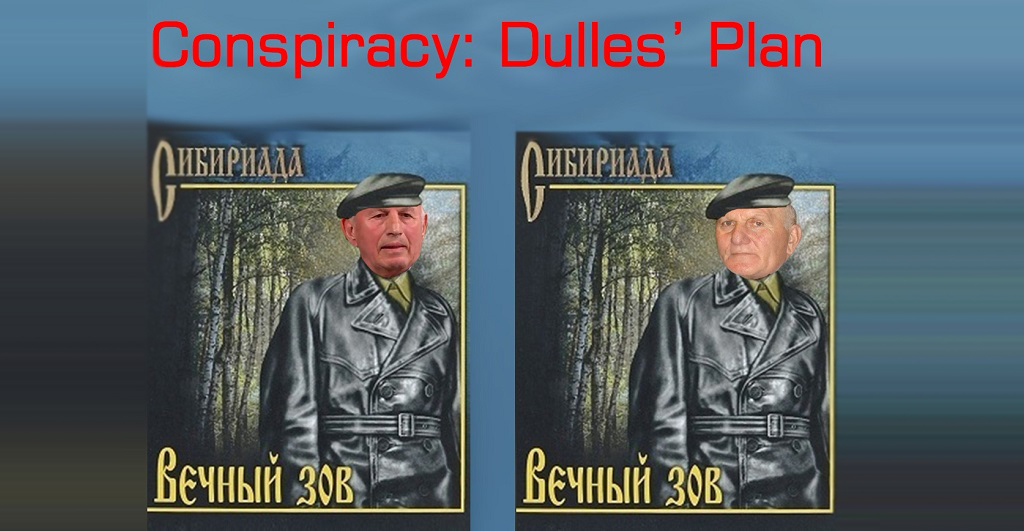 Guram Lakia, former Chief of stuff of the National Guard spoke about the Doctrine of Dulles in December 17-23 issue of Asaval-Dasavali. According to him, the events of April 9, 1991 were contradicting interests of both Russia and the United States and it was “the victory of the dark forces under the Allan Dulles’ Program”.

The quotes, which allegedly belong to the doctrine of Dulles’, are originally from the novel of the Soviet author Anatoly Ivanov, “Eternal calling” (Вечный зов) and the character of the novel – officer Polipov.

According to the novel “Eternal Call”, the Soviet officer, Polypov, is being captured by German army during World War II. In captivity he is interrogated by SS officer Lakhnovsky, who was a former member of the King’s gendarmerie and the old acquaintance of Polipov. Lakhnowski discloses Hitler’s plans to Polipov. The plan aims at destroying the Soviet (Russian) people through its so-called fifth column in Russia. See quote from the novel that is available electronically on the link (p. 34).

Myth Detector had previously written about Dulles Doctrine. Soviet Roman “Eternal Call” (Вечный зов) was previously already presented in Georgian media as “Dulles Plan” in 2014-2017 and in 2018. Myth Detector offers you the main sources of conspiracy about Doctrine of Dulles.

Geworld.ge Links the Use of foul Language in Georgia with the Dulles Doctrine

Gasviani was a member of the Parliament of Georgia in 2000-2004 through the party list of “Union of Citizens of Georgia”. At the same time, he was the member of CIS Interparliamentary Assembly – Parliamentary Delegation.

Giorgi Lakia. Guram Lakia was the head of the headquarters of the National Guard during the presidency of Zviad Gamsakhurdia. In 1993 Lakia left the country with Gamsakhurdia and said that he had been living with his family for 8 years. Today, Lakia is interviewed by news outlets such as “General Newspaper”, “Society”, “Press Caucasus” and others. In his interviews, Lakia speaks about the overthrow of Zviad Gamsakhurdia and discusses the present situation in a homophobic and anti-Western context. For instance, on May 5, 2018, in a letter to the Press-Caucasus web site Guram Lakia notes that the national ideology has been replaced by sinful practice of Sodom and Gomorrah, the Georgian Dream has cohabited with “Soros’ sucker liberals” and “degraded ones” ask for “drugs and prostitution to be legalized and brothels stay inviolable “.