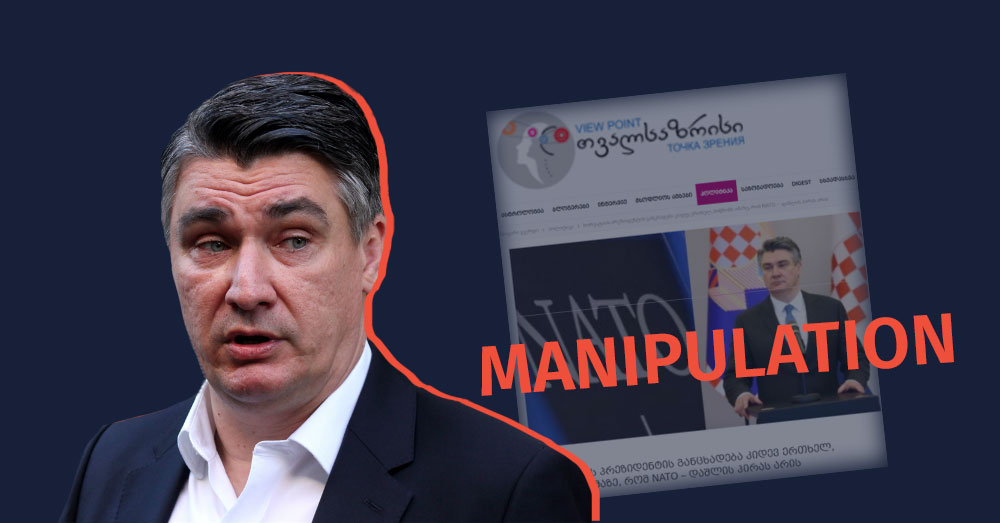 On January 26th, the online publication “tvalsazrisi.ge” published an article titled “Croatian President’s statement once again proves that NATO is on the verge of collapse.” The author of the article, Irakli Jankarashvili, writes that in the event of a conflict between Ukraine and Russia, the Croatian government will withdraw its military personnel from NATO forces. The article names the President of Croatia as the source behind the statement.

The information disseminated by “Tvalsazrisi.ge” is manipulative. Croatian President Zoran Milanović has indeed stated that in the event of an escalation of the Ukrainian-Russian conflict, he will withdraw the country’s military contingent from NATO forces, although the deployment of troops is the prerogative of the Croatian Defense Minister. Not to mention, according to the high-ranking Croatian officials, such as the Prime Minister and Minister of Foreign Affairs, the comments made by Milanović does not depict the official stance of the Croatian government.

Using the statement of the Croatian President Zoran Milanovic to prove that NATO is on the verge of collapse is groundless. Croatia is a parliamentary republic, although President Milanović is considered the Commander-in-Chief of the Armed Forces, the government is headed by the Prime Minister, who manages the country’s domestic and foreign policy. Milanović has a strained relationship with the government and has repeatedly opposed them.

As for the issue of deploying Croatian troops in NATO, this is decided by the Minister of Defense, with the consent of the Parliament. In addition, according to Politico, Croatian Foreign Minister Gordan Grlić-Radman stated that the position of the Croatian government does not coincide with the position of the President. According to Radman, Croatia is a loyal member of NATO and its actions are always negotiated and agreed on with its partners.

In addition to demanding the withdrawal of their force, the President of Croatia has also stated that Ukraine is a corrupt state and has no place in NATO. Andrej Plenković, the Prime Minister of Croatia, has responded to this statement, apologized for it and stressed that it does not reflect the official position of Croatia.

“It felt as if a Russian official was speaking” – stressed the Prime Minister while making a comment regarding Ukraine to the media.

He further noted that the Croatian military contingent was not present in Ukraine, since it had just returned from Poland. The Prime Minister’s statement was published on the website of the Croatian government.

As for the general position of NATO, Secretary-General Jens Stoltenberg said in an interview with CNN on January 25th that “a diplomatic way out” of the Russia-Ukraine conflict may still be found, although this requires de-escalation on the part of Russia.

“NATO will not deploy NATO combat troops to Ukraine, but we need to be sure that there is no misunderstanding about our readiness, our commitment to defend all allies, especially in the eastern part of the alliance,” Stoltenberg told CNN.

The author of tvalsazrisi.ge, Irakli Jankarashvili, publishes anti-Western, pro-governmental materials both on his website and Facebook personal accounts. Jankarashvili manages a number of other Facebook pages and accounts. Not to mention, he is affiliated with a number of pro-Russian platforms, such as the Kremlin-affiliated outlet “News Front Georgia.” Jankarashvili supports the pro-Kremlin “Alliance of Patriots of Georgia” and its leader Irma Inashvili. Jankarashvili has been repeatedly spreading materials containing disinformation and fabricated quotes.

Recently, Irakli Jankarashvili has been suspected of publishing manipulative or false articles on tvalsazrisi.ge about the US, NATO and Ukraine.