Conspiracy as if Modern Technologies Existed in the Past 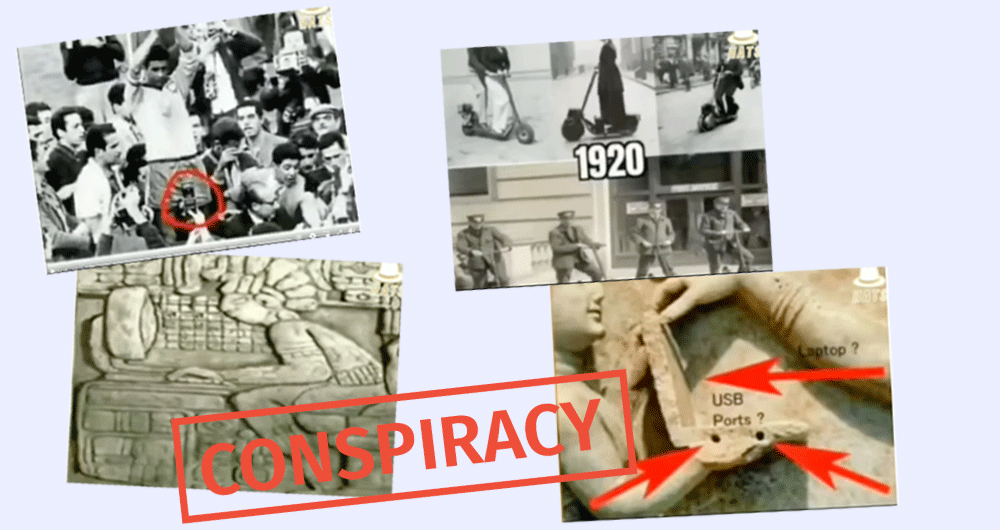 Originally from 2021, a video claiming to show banned archival footage related to technology that has been hidden from society has gone viral again on Georgian social media. The author of the post claims the video shows that modern technology, such as laptops and mobile phones, existed in the past, but that this fact has been concealed from people. 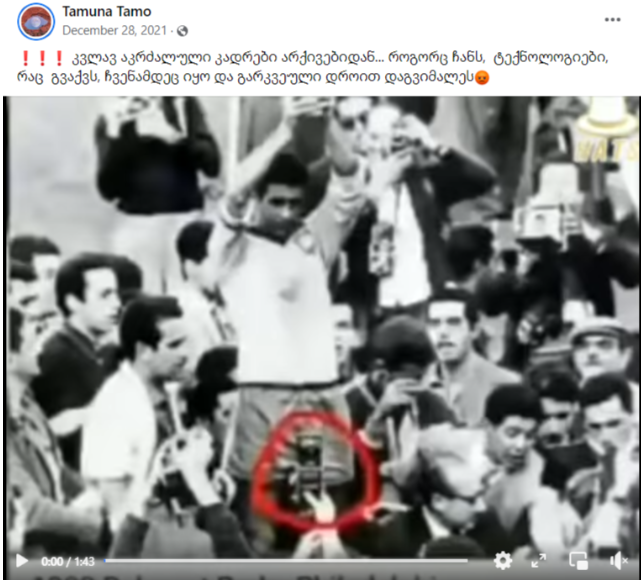 The video uses a lot of previously debunked images used by conspiracy theorists to promote the idea that governments are hiding technology from us or are making a profit from things that should be free. Many of the images that appear in the video do not show modern technology used in the past, but rather common items of the time that were just seen from different angles. Other images shown misrepresent the technological ideas portrayed, and show a lack of understanding by the video’s creator.

The video opens with a black-and-white image of the Brazil captain Mauro Ramos holding a trophy after his team beat Czechoslovakia in the 1962 World Cup. Circled in red is what looks to be a flip phone aimed at Ramos, which is incongruous given that such technology was invented in 1996. However, what the picture actually shows is a handheld box camera, which is made up of a square device with a lens at one end and film at the other. The most popular of these cameras was the Kodak “Brownie” camera, which debuted in 1900.

We are then shown an image of a woman seemingly holding something in her hand against her head like a phone. This footage originates from 1938, and it is likely that she is just holding an object such as a wallet and needed to scratch her head. Similarly, another image claims to show a woman with a cellular phone in 1915. This image is blurry, however, and the object she is holding cannot clearly be seen.

Numerous images of statues or carvings are shown in the video, supposedly showing the use of laptops and other modern technology in ancient times. For example, one image claims to show a statue holding a laptop with USB ports in it. This carving comes from a Greek funerary statue dating from 100 BC and actually shows an object such as a jewelry box, a shallow chest, or a hinged mirror. The so-called USB ports are actually drill holes to attach a bronze object or another piece of marble; this attachment has since been lost over time.

Another image purporting to show a laptop being used in ancient times is actually using artwork created in the 21st century. Raul Cruz, inspired by Aztec and Mayan art, first created this image and titled it “Future Ancestors” for an issue of Strange Horizons in 2006 before making a fiberglass copy in 2015 titled “Memoria del futuro” or “Memory of the future.”

The video also shows a series of images showing electric scooters and electric vehicles. While the author of the post claims this technology was being hidden from us, there are numerous articles online about the existence of such technology and why it went out of fashion.

Electric scooters were first invented in 1915 by the Autoped company, and they quickly became a popular recreational vehicle for tourists. However, the scooters ultimately were not a commercial success, likely because they were more expensive than a bicycle and didn’t have the comfort of a seat. When the U.S. introduced more stringent traffic laws, this led to further financial difficulties by the producers of the scooter, eventually leading to their fade-out in the vehicular market.

Similarly, though Studebaker saw the attractiveness of electric vehicles, leading him to produce around 1,800 electric vehicles between 1902 to 1911, it just was not financially or technologically viable to succeed against gas-powered automobiles. At that time, a Studebaker electric vehicle could go around 40 miles at about 20 mph before it lost power. There were no great options for recharging the cars, making it unreliable. In addition, gas-fueled cars were able to be made at half the price, leading manufacturers including Studebaker to switch. Though different variations of electric vehicles popped up throughout the 20th-century, it wasn’t until recently that they became truly technically and financially viable.

None of these historical inventions were “hidden” from society — they just were not viable at the time or were seriously improved upon over the intervening years. This is also true of two more supposedly advanced technologies that were used in the past: the Bell Picturephone and GPS navigation devices

Bell Labs first let the public use an early version of the picturephone at the 1964 World’s Fair in New York, before setting up picturephone booths in New York, Chicago, and D.C. However, the price to use this technology was incredibly high. A three-minute phone call from New York to Chicago cost $27, which is about $200 today. When the company set up a monthly service, they charged $75 ($575) in Chicago and $160 ($1,225) in Pittsburgh — it simply wasn’t affordable and the service was soon shut down.

In contrast, the so-called GPS device shown in 1930 wasn’t using futuristic technology, but was a very basic model that has since been seriously improved upon. The Iter Avto, the world’s first automobile navigation device, consisted of a screen that manually scrolls paper maps at a rate proportional to the vehicle’s speed. However, if a motorist turned, he would need to change the map and find his current location, making it only useful for very basic driving.