“Connect to real opposition!” – FB accounts with close links to Alliance of Patriots and other anti-Western groups 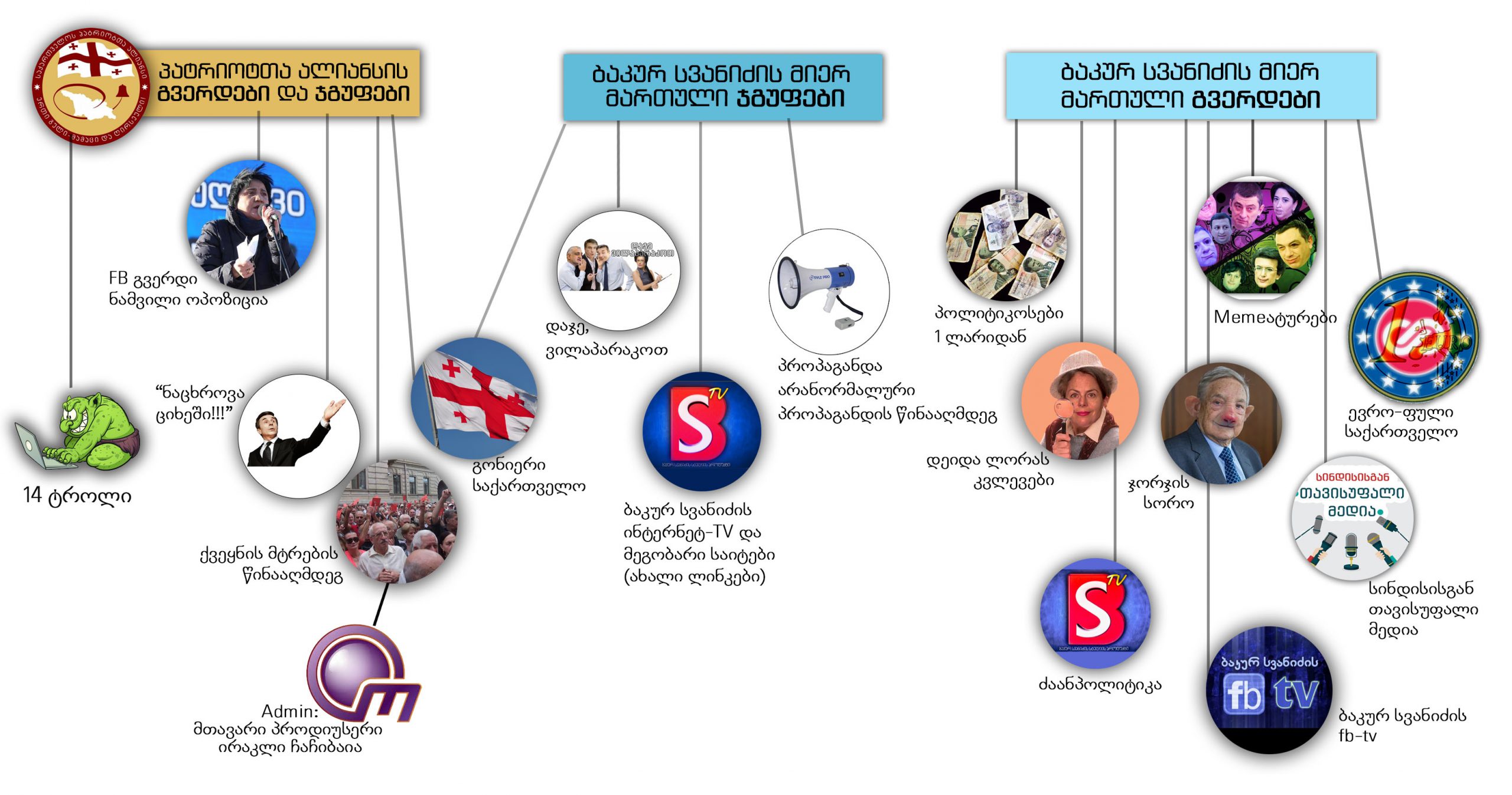 After exposing, through open sources, fake profiles (14 trolls) with close ties to the pro-Russian political party, Alliance of Patriots, the Myth Detector additionally revealed a Facebook page (“Real Opposition”) and three groups (“Reasonable Georgia,” “Against Enemies of the Country,” “Prison Awaits UNM Mob!!!”), also with close links to the Alliance of Patriots, which,  in turn, enabled the Myth Detector to identify other anti-western accounts. This newly identified set of accounts is administered by Bakur Svanadze, an author of a pro-Kremlin online edition “Georgia and World” (Geowrld.ge) and includes, at least, eight pages and four groups on Facebook (see, infographics 1). 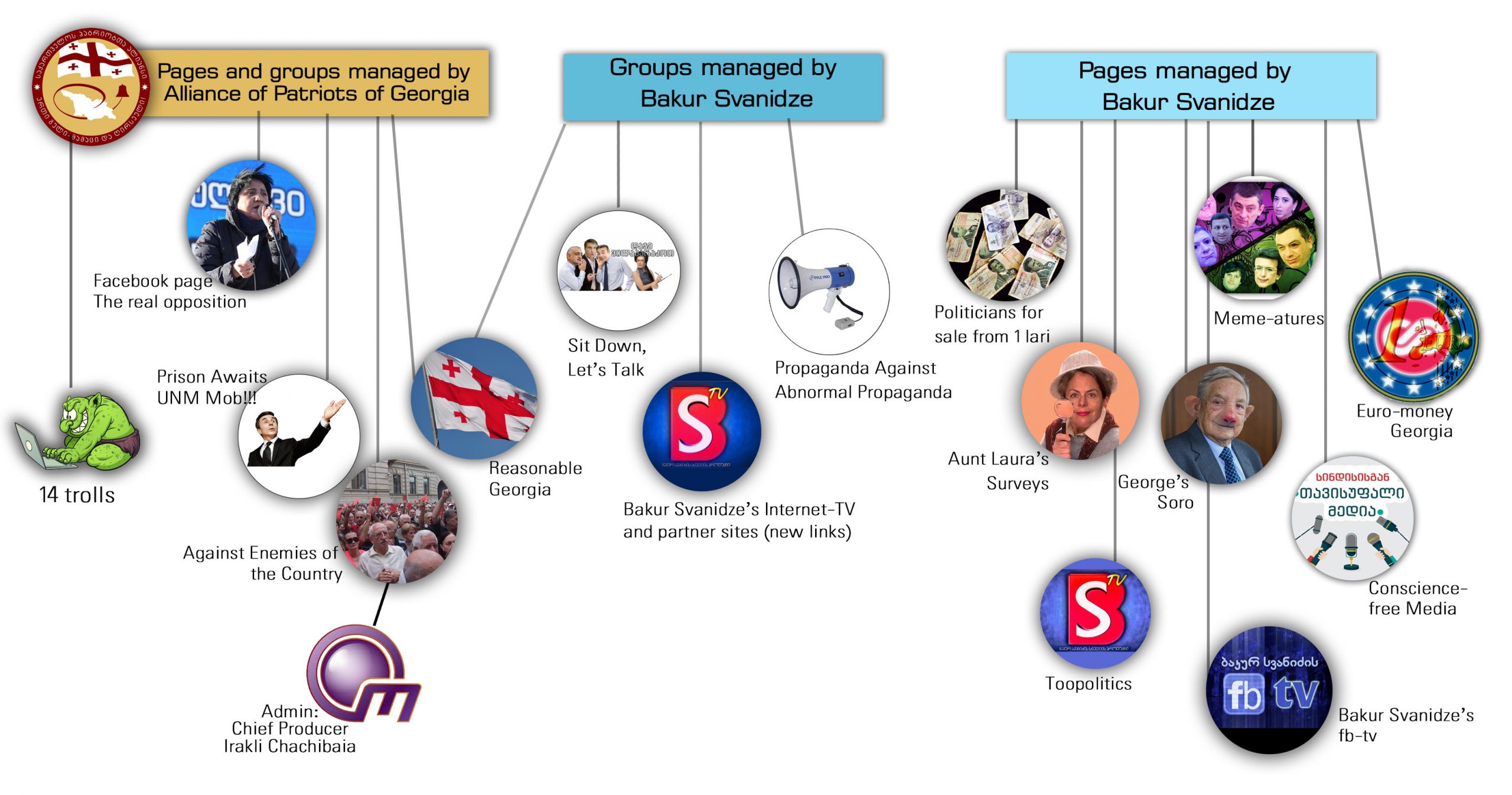 Page and groups linked to the Alliance of Patriots

FB page. Social accounts linked to the Alliance of Patriots – the page and the groups as well as troll profiles, largely follow the agenda of this political party, promoting the activities of the party, on the one hand, and on the other hand, discrediting political opponents and liberal groups; also launching an organized response to any criticism about the party leader on social networks, as seen in case of troll accounts.

The page “Real opposition” was created on 31 January 2020. The profile photo of the account features the party leader, Irma Inashvili, while the section “About” says that the page is a personal blog. 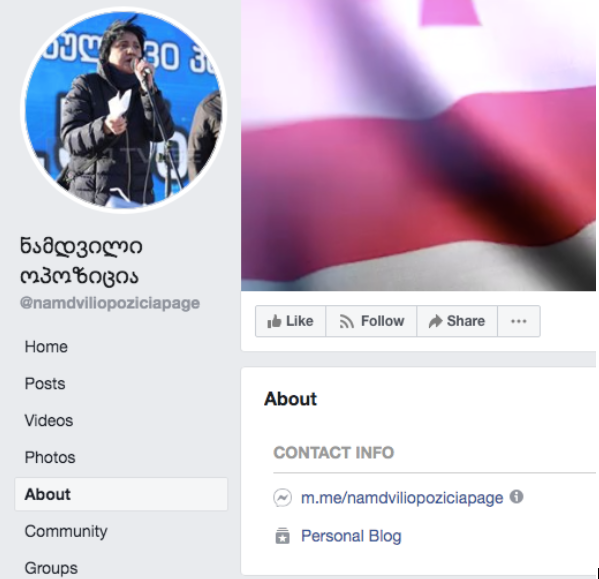 The page having mustered 910 likes has five administrators. In related pages, the Facebook shows three pages that are run by Bakur Svanidze: 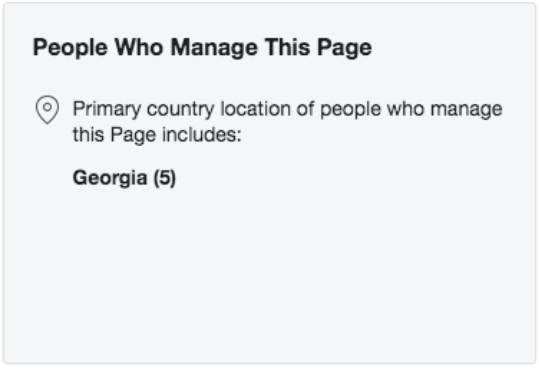 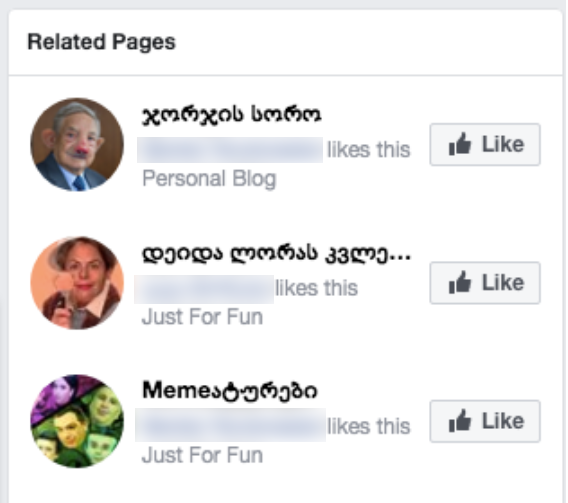 Svanidze’s statement against Laura Thornton and the Myth Detector was published by the page “Real Opposition” alongside the pages run by Svanidze in an organized manner, thereby showing the link between them. As of 6 March 2020, the page “Real Opposition” featured one sponsored post – a report of TV Obieqtivi on a communication campaign led by the party leader, Irma Inashvili, against US companies, NDI and IRI. FB groups. From three groups associated with the Alliance of Patriots, one (“Reasonable Georgia”) is administered by the page “Real Opposition,” the second (“Against Enemies of the Country”) is run by a TV Obieqtivi employee, while the third (“Prison Awaits UNM Mob!!!”) is run by a political party activist.

“Reasonable Georgia”, the group run by “Real Opposition,” was created on 6 February 2020 and its administrators are Bakur Svanidze and Giorgi Laghidze, the founder of multimedia.ge platform.

Another related group, “Against Enemies of the Country,” was created on 19 May 2019 and its administrators are Irakli Chachibaia, the chief producer of TV Obieqtivi channel, and Nikoloz Inashvili, a person connected with the Alliance of Patriots.

“Prison Awaits UNM Mob!!!” was created on 15 September 2015. It is run by Davit Gudiashvili who, on Facebook, indicates Georgian Railways as his place of employment while his profile link shows a different name, Maiko Kvaratskhelia. News items about the Alliance of Patriots are most frequently shared in this group by a party activist, Nino Kvaratskhelia. 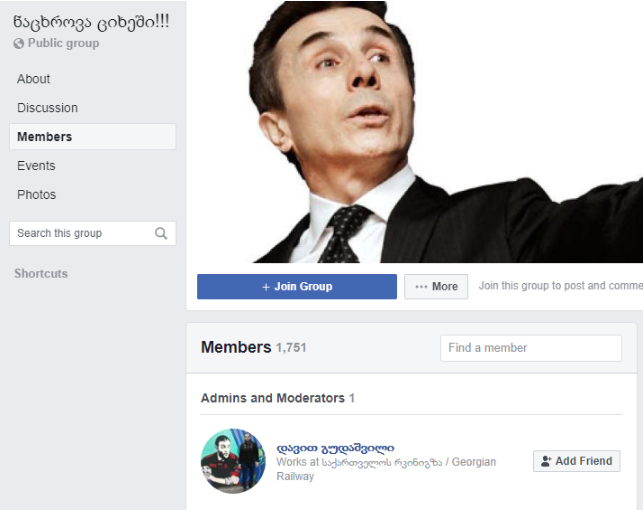 The groups associated with the Alliance of Patriots made it also possible to identify those pages and groups administered by Bakur Svanidze that are engaged in discrediting the political opposition, media and nongovernmental organizations on the Facebook. Two of these pages – “George’s Soro” [play on the name of George Soros – “soro” in Georgian means “hole”] and Euro-money Georgia were created on 31 January 2020 while two others – “Aunt Laura’s Surveys” and “Meme-atures” were also created on the same day – 4 February. Only two of these pages, which post media content created by Bakur Svanidze personally, indicate “Author’s information” under the “About” section. The remaining six pages are covertly run by Bakur Svanidze, not providing users with the information about their administrators. Four pages indicate “Just for Fun” in this category, the fifth indicates “Personal Blog” and the sixth indicates “TV Channel.”

The page “Bakur Svanidze’s fb-tv” most frequently posts YouTube links of Svanidze’s programs. In 2016, the page also posted a meme against NATO and James Appathurai, designed to ingrain nihilism about Georgia’s accession to NATO. Part of the campaign organized against Laura Thornton, the Myth Detector and the Media Development Foundation (MDF) was also a number of memes and an article by Bakur Svanidze, published on the webpage of Georgian and World, which were intensively shared among Facebook groups by News Front.

From the above listed pages, the posts were most intensively shared among groups by Qeti Otiashvili and a user, Laura Abramia. Among these groups are the groups run by Bakur Svanidze as well as the groups “Kakha Kaladze Mayor of Tbilisi,” “Protest” and “Comrades, Giorgi Margvelashvili is Listening!”

As of 5 March, the page “Politicians for Sale from GEL 1” had one sponsored post. Apart from these groups and pages, Myth Detector identified 14 fake accounts which made comments in support of Alliance of Patriots under the Myth Detector publications.

Bakur Svanidze is notorious for his anti-Western, homophobic comments and hate speech on the social network; he is also an author at Georgia and World, the online edition with close ties to the Kremlin. Georgian and World is the edition of Historic Heritage LLC with one of its board members, Alexandre Chachia, working in Russia. On 13 February 2014, Alexandre Chachia was awarded the Order of Honor by Russian President Vladimir Putin for “strengthening the friendship and cooperation with the Russian Federation, great contribution to the development of scientific and cultural ties.” 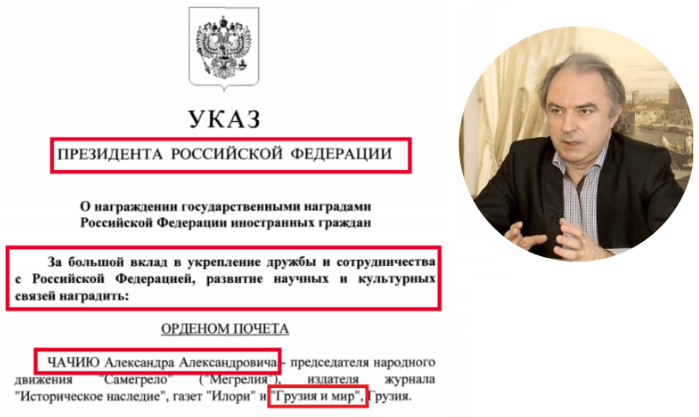 Bakur Svanidze is often quoted in anti-Western propaganda studies conducted by the Media Development Foundation and publications by the Myth Detector. For example, Bakur Svanidze justified Stalin’s repressions in 1937 and 1938. In the 2016 parliamentary elections, Bakur Svanidze ran as a majoritarian candidate for Vazisubani district from the political party, Leftist Alliance.

Bakur Svanidze” “’My father’ – that whining and whimpering of family members of victims of 1937-1938 Stalin’s repressions… ‘My father was taken away in 1937 and I no longer saw him,’ ‘my father is an innocent victim of the tyrant’ and so on and so forth. However, do you know who were, in reality, arrested and exiled or executed? In often cases that were those very people who before that – in 1933-1934, executed and arrested, tortured and ruined other innocent people themselves! And now they want to elicit compassion to them by recalling their hard childhood and even demand privileges as children of repressed people… In 1937-38, Stalin and Beria carried out the cleansing and filtering of mainly Bolshevik elite! Militia, also security service, secretaries of regional committee as well as groups of informants were arrested, exiled and executed!!!”

Bakur Svanidze: “As regards our ‘altruistic’ defense partner, it anyway has those Javelins and Stingers warehoused without use. By the way, I would like to remind those ‘vigorous patriots’ of one term – ‘utilization’ which means the destruction of military technique that is written-off, useless or expired. Let me tell you that this ‘utilization’ is quite an expensive exercise; indeed, why should they pay for the destruction of these outdated military systems if they have a chance to earn money on the account of a ‘gullible’ partner?! Of course, it is a separate topic of discussion as to how modern is the air defense system Stringer ultra-modern itself, which was used back in the 1980s against the Soviet aviation in Afghanistan and which first appeared in the US army as early as in the 1970s.”

Bakur Svanidze: “In reality, it is not the US-European democratic values that oppose Russia in our country, but the Ottoman Empire wrapped in NATO’s skin… Why then we are surprised that Russia, which having occupied Georgian territories and population 100 years ago treated them way more humanely than another more aggressive and fearful occupier – Turkey, is now ‘regretting’ its ‘humanity’ and is thinking that had he acted like its rival Turkey, destroying everything Georgian on the occupied Georgian land, banning Georgian language and ruining the national identity, Georgians would have turned to it now and declared it a “historic friend”; or at least, it would have retained the territories without problem.”