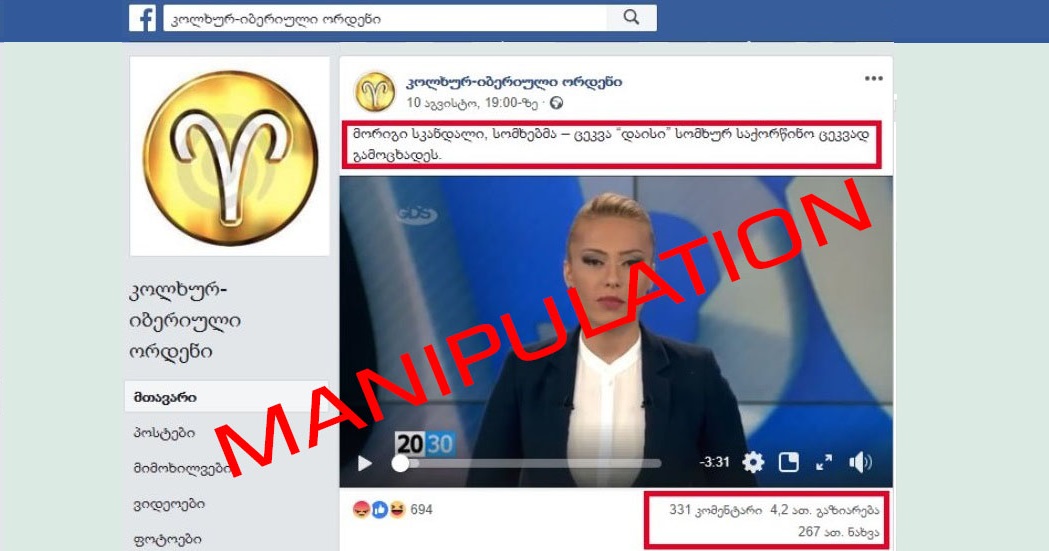 On August 10, the Colchic-Iberian Order (კოლხურ-იბერიული ორდენი) posted on its Facebook page a story aired by 20/30 program of GDS TV on January 22, 2016.  The following caption was added to the story: “Another scandal: The Armenians labeled Daisi as an Armenian wedding dance.” The story aired by GDS TV referred to the video uploaded on YouTube in 2016, featuring a Georgian dance Daisi performed by the U.S-based Gevorkian Dance Academy and mislabeling it as an Armenian wedding dance. The story has been shared 4,200 times and seen 267,000 times (as of August 17). In addition, the majority of comments made by users were of Armenophobic nature and contained hate speech. The Colchic-Iberian Order disseminated one-sided, unverified story prepared by 20/30 program of GDS TV in 2016. It should be noted that after the complaint was filed to the TV channel’s self-regulatory body, GDS had to acknowledge its mistake and rectify inaccuracies. Later, the TV channel explained that the Daisi dance was referred to as Georgian in the Academy’s concert programs and that the Academy had nothing to do with the caption added to the video uploaded on YouTube by the third party.

On January 22, 2016, GDS TV’s 20/30 program aired the story titled “Georgian dance in Armenian?!” The story was built on unverified facts according to which the Georgian dance posted on YouTube, which was mislabeled as an Armenian wedding dance, was an attempt to misappropriate Georgian dance by the Gevorkian Dance Academy, and respectively represented a dispute for intellectual property.

Giorgi Tumasyan, founder of the Peace Foundation, filed a complaint to the self-regulatory body of GDS TV and demanded rectification of inaccuracies. In response, the editorial board of 20/30 program prepared a new story on January 25, in which it partially covered the response statement released by Vartan Gevorkian, director of the Gevorkian Dance Academy, on January 23.

According to Gevorkian’s statement, the video was posted on the MENQ meroncov YouTube account without the Academy’s authorization. “We have formally requested MENQ meroncov to correct their error and remove our video from their account once and for all,” Gevorkian said in the statement, adding that the copies of concert programs, where Daisi was referred to as Georgian dance, were handed over to the editorial board.

Determining news sources is particularly important in the epoch of social media, when any person can disseminate a desirable material through various social platforms. Traditional media bears special responsibility when verifying media products created by users. Regretfully, no such responsibility was assumed by the editorial board of 20/30 program.

On January 25, 2016, Georgian weekly newspaper Kviris Palitra published an article titled “Tashi, Bicho, Vartanusha!” (Clap, Vartanush, Clap) that prompted four non-governmental organizations – Peace Foundation, Media Development Foundation (MDF), Tolerance and Diversity Institute (TDI) and Georgian Democracy Initiative (GDI) – to initiate a complaint to the Georgian Charter of Journalistic Ethics. According to the March 26 decision of the Charter’s Board, the author of the article violated principles 1, 5 and 7 of the Charter of Journalistic Ethics.

The Gevorkian Dance Academy is an international dance school, which performs traditional dances from around the world and promotes multiculturalism. Labeling the performance of traditional dances of various nations as their misappropriation is misleading and promotes the formation of false stereotypes on grounds of nationality that ultimately incites Anti-Armenian sentiments against the Armenians living in Georgia.